'It’s not like we’re going off-script entirely. But that has happened in a small number of cases,” said provincial health officer Dr. Bonnie Henry in response to questions that the wrong people were getting called in for immunizations
Jan 13, 2021 3:48 PM By: Stefan Labbé 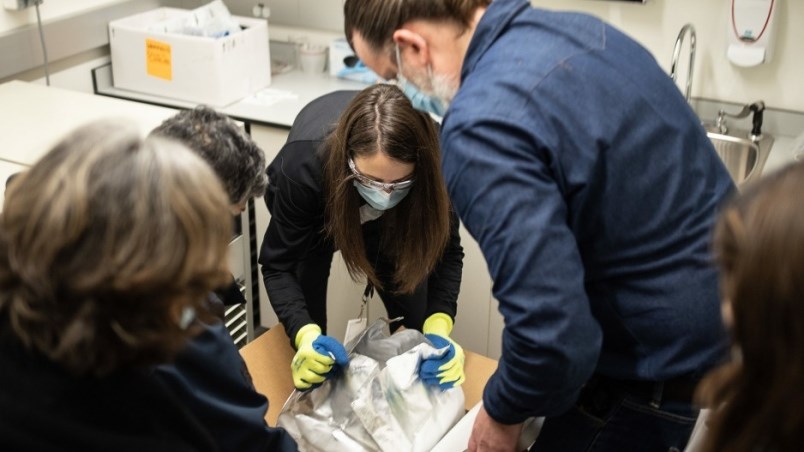 Pfizer-BioNTech vaccine arrives in B.C. in December. Photo via Government of B.C.

B.C. health officials are investigating allegations that some doctors have been immunized with a second dose of COVID-19 vaccine long before they were scheduled to receive one.

On Wednesday, Health Minister Adrian Dix acknowledged internal reports of doctors in Vancouver Coastal Health who had received early second doses of the vaccine at a time when B.C. has used up all available doses.

“People expect everybody to follow the rules and follow the guidelines,” said Dix. “We’re obviously looking into this and we’re very disappointed.”

Other concerns have been raised around Fraser Health staff members, who do not work on the front line but have received the vaccine in the first round of immunizations.

A Jan. 12 Global News report found two directors at Peace Arch Hospital in Surrey, as well as one of the director’s sons and son-in-law were among a handful of people off the medical front line who received a COVID-19 vaccine in recent weeks.

The Tri-City News has not been able to independently confirm the allegations, but provincial health officer Dr. Bonnie Henry said each of the health authority’s COVID-19 vaccine clinics is reviewing its protocols around who gets called at the end of the day should any thawed vaccine need to be used up.

“It’s not like we’re going off-script entirely. But that has happened in a small number of cases,” said Henry in response to questions that the wrong people were getting called.

But Henry added that not all health care staff on the front line are providing medical care, and in some cases, it makes sense for managers to get called in to use up vaccine before at the end of a six-hour period when it needs to be either administered or risk becoming ineffective.

“We do have administrators, nurses in particular, who are part of our teams that go into long-term care to manage outbreaks,” said Henry. “For the most part, things are going really, really well and they’re doing the right thing.”

Concerns over the gap between who is prioritized for a COVID-19 vaccine on paper and who gets the vaccine at a clinic come as a lull in vaccine delivery to B.C. means nearly all doses have been used up in the province.

New shipments of the Pfizer-BioNTech vaccine are expected to arrive on Thursday and another batch of the Moderna vaccine later this week, said health officials.

Meanwhile, Henry said nearly all residents and staff at long-term care homes have received one of the two COVID-19 vaccines across the province.

Those who haven’t been vaccinated include people currently testing positive to for the coronavirus, while people who may have been exposed are receiving the vaccine even if it’s too late to stop the onset of symptoms.

Though there have been some concerns raised among care aides, uptake of the vaccines has been high. Henry said convincing people of its efficacy and worth in the wider population is predicted to be more difficult.

“The challenge will be when we get into other groups of the population that are not as aware of the challenges and risks that we see,” she said, referring to health care workers, many of whom she said have been traumatized seeing the devastation the virus can cause to the human body.

VACCINE SUPPLY TO RAMP UP

The volume of COVID-19 vaccine is expected to ramp up significantly over the coming months from just under 800,000 doses earmarked for delivery between mid-December and mid-March to 2.64 million doses from April to June.

By the third quarter, that number is expected to skyrocket to 6 million doses — not including 20 million new Pfizer-BioNTech doses recently secured by the federal government and the possible inclusion of several more vaccine candidates.

To manage the “significant and massive scaling up,” Dix said the province is expanding its immunization team and has appointed Dr. Penny Ballem, chair of Vancouver Coastal Health, to lead the province-wide effort.

In a call with reporters Wednesday, Ballem described the drive to vaccinate 4.3 million British Columbians by the end of September as “one of the most important initiatives we’ve been tasked with in the history of the health sector in B.C.”

1
The Latest: India vaccinates 2 million health workers
2
Beachgoers on Bowen Island get a close encounter of the orca kind (VIDEO)
3
New COVID-19 infections in B.C. continue to trend lower
4
Cameras in Snug Cove are for Netflix TV series
5
Hair frost vs. hoar frost: do you know the difference?