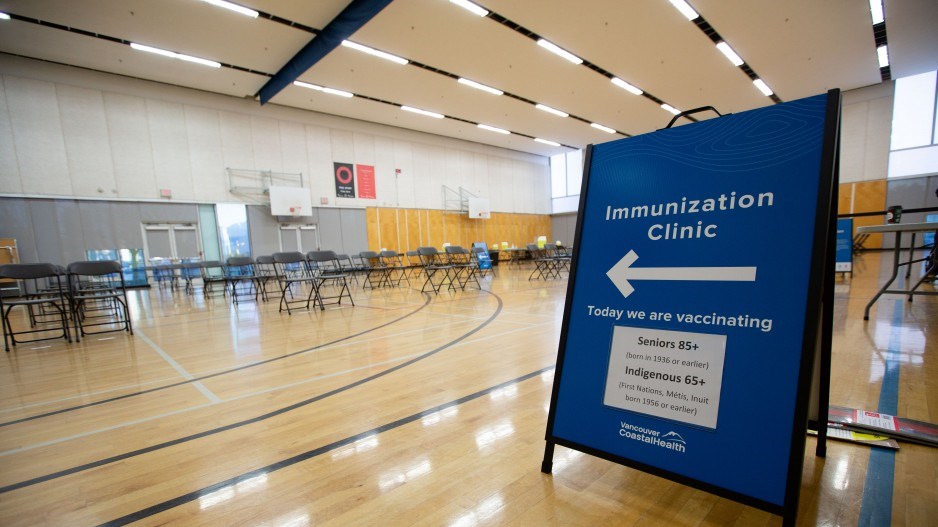 The province is suspending its offer of early COVID-19 vaccinations for essential workers "for now" amid uncertainty over the AstraZeneca plc vaccine, according to B.C.'s top doctor.

The move comes after B.C. provincial health officer Dr. Bonnie Henry announced Monday the province would stop administering the AstraZeneca jabs to those under the age of 55.

“We’re going to need to regroup and we will come back early next week as soon as we have more information to determine how we’re going to move forward with that program,” she said during a Thursday media briefing.

“I’m asking for patience from all of our first responders and the others that we have identified.”

Immunization on the West Coast relies on administering the Pfizer Inc. and Moderna Inc. vaccines to the general population based on descending age brackets.

The province’s decision earlier this week to suspend the use of AstraZeneca for those under 55 came amid growing global concerns the vaccine was linked to a small number of cases of blood clots to have emerged in those who have received a dose.

“I am confident that we will be able to get back to that program soon, but we need to make sure that we’re all comfortable with the safety and with whom the best population to use [the vaccine on is],” Henry said.

Instead of offering the vaccine to essential workers, the government said it would instead offer it up to British Columbians 55-65 at 150 pharmacies in the Vancouver Coastal Health and Fraser Health regions.

Eligible British Columbians were able to contact their local pharmacies as of Wednesday to book an appointment outside their age cohort.

But Wednesday proved chaotic for many with the 150 pharmacies offering the AstraZeneca doses to eligible British Columbians offering a smorgasbord of ways to book.

Some pharmacies only accepted bookings made by walk-ins, some booked over the phone, while others offered online waiting lists or mobile apps to get British Columbians into the queue.

In the case of London Drugs Ltd., which provided COVID-19 vaccinations at three pharmacies, the chain booked up all its available appointments the day before they were to be made available.

The company said in a statement its phone lines were “inundated with customers wanting to book appointments” after the province made its Tuesday announcement.
“These pharmacies immediately began taking down eligible patient information aged 55-65 for appointments,” according to the company.

In a later statement, London Drugs said there was no way to communicate clearly to all pharmacies and customers of the planned roll-out.

“Many of our staff and pharmacies learned first from the government announcement before hearing from London Drugs pharmacy management,” the company said.

“We are very alarmed and disappointed at allegations made in social media that London Drugs allocations were provided to employees and other insiders. This is absolutely false, and incorrect and is a libelous and slanderous allegation to London Drugs reputation.”

As of Thursday, 700,255 British Columbians have received at least one dose of a vaccine, while 87,394 have received second doses.

Meanwhile, the province administered a total of 31,569 doses over the past 24 hours — down slightly from the record 31,887 doses a day earlier.

There are 4.3 million British Columbians eligible to be vaccinated under the province’s present immunization strategy.

All three of the vaccines approved for use in Canada require two doses.

If the province were to continue on its current pace of about 32,000 doses per day, it would take until at least November to vaccinate all those who remain eligible.

But Henry said that if the vaccine manufacturers, which have been ramping up deliveries over the past month, continue to deliver doses “we’re on track to get everybody offered a vaccine by early July [or] by the end of June.”

Henry’s estimate would seem to indicate she’s referring to the administration of first doses.

Instead of the previously planned April 12 launch, the province will now open it up on April 6.

Presently, the Fraser Health authority is the only one to offer online bookings.

And up until Wednesday, when pharmacies began accepting calls, the rest of B.C. had only been able to book vaccinations via call centres tied to local health authorities and maintained by Telus Corp.