270 organizations signed a letter addressed to Prime Minister Justin Trudeau and all 10 premiers calling for “clear guarantees” and “effective measures” to ensure vaccine access to both migrant farm workers and an estimated 500,000 undocumented people living in Canada
Feb 24, 2021 2:33 PM By: Stefan Labbé 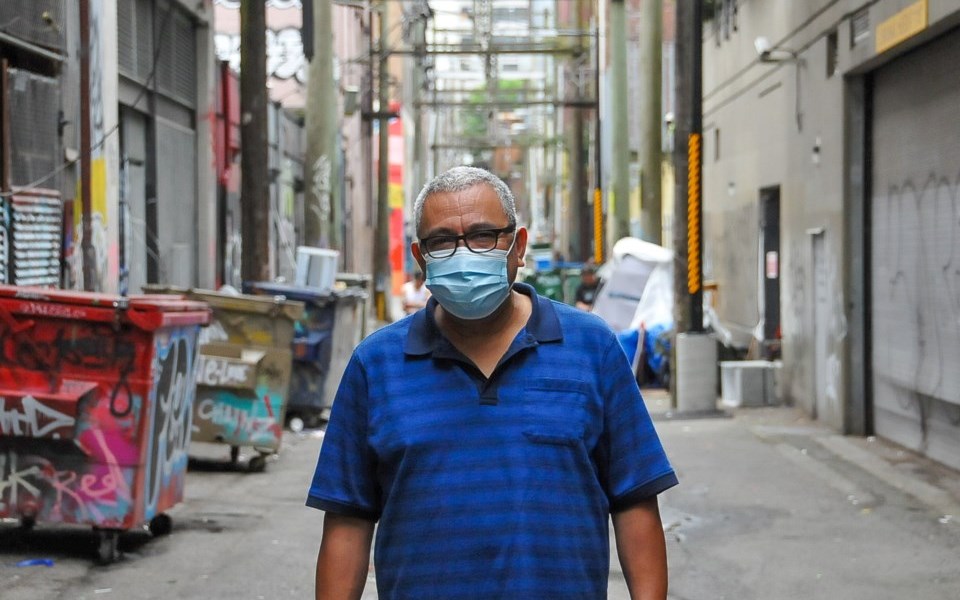 Byron Cruz of Sanctuary Health outside a makeshift warehouse in Vancouver that serves as a distribution point to help feed migrants across the Lower Mainland.STEFAN LABBÉ/THE TRI-CITY NEWS

A coalition of immigration advocates, health care workers and civil rights organizations is calling on federal and provincial authorities to ensure access to COVID-19 vaccines for migrant and undocumented workers without fear of deportation.

Under the banner of the Migrant Rights Network, 270 organizations signed a letter addressed to Prime Minister Justin Trudeau and all 10 premiers calling for “clear guarantees” and “effective measures” to ensure vaccine access to both migrant farm workers and an estimated 500,000 undocumented people living in Canada.

“It’s not accessible right now, and that’s not acceptable, especially if we’re going to hit that herd immunity,” said Dr. Danyaal Raza, a Toronto physician and chair of Canadian Doctors for Medicare.

Access to COVID-19 testing has already proven difficult for undocumented workers, say advocates, pointing to police presence at testing sites across Metro Vancouver and requirements that individuals looking to get tested be enrolled in the province’s Medical Services Plan.

“It’s terrible,” said Byron Cruz, who as the head of Sanctuary Health, helps migrant and undocumented workers gain access to medical care. “There is a presence of the Vancouver police department. They're afraid of going there.”

That fear, said Cruz, is grounded in past experiences where undocumented workers were turned over to officers from the Canadian Border and Services Agency after seeking access to health care in hospitals across the Metro Vancouver region.

“We’re concerned about the vaccines because we might go through the same situations that are currently going on with the COVID test,” he said.

The call comes at a time when an increasing number of undocumented families in the Metro Vancouver area have been hit with COVID-19, according to Cruz.

Since the start of the pandemic, his organization has been running food and essential goods to families left out of work. But with many undocumented people working as essential workers as part of a construction crew or in a restaurant, exposures to the virus have ramped up in recent months, and the virus has spread through dozens of families often living in larger households where it’s impossible to self-isolate.

“We’re only able to support them with the urgent primary care centres. We have to call one-by-one to tell them they don’t have MSP,” said Cruz. “We don’t know how many we’re missing.”

Whereas undocumented workers live with the constant threat of deportation hanging over their head, temporary migrant workers face other pressures, only made more challenging by the pandemic.

“We are afraid that there are still active cases on the farms,” he said. “It’s one of the populations that’s really at risk.”

At the same time, Cruz praises the B.C. government’s role in overseeing a 14-day hotel quarantine program for migrant workers that’s been operational since June.

Still, said Cruz, there are worrying signs the virus is slipping onto farms.

Through November and December, Cruz said he reached out to Fraser Health after reports of transmission on several Fraser Valley farms. When public health teams visited the farms, he said they found several active cases.

“We are afraid that there are still active cases on the farms,” said Cruz. “What is the purpose of the quarantine if not to protect people?”

Fraser Health deferred questions from the Tri-City News to the Ministry of Health, which had not yet responded at the time of publication.

Some experts are calling for B.C. health officials to ramp up the vaccination of essential workers instead of starting with the oldest British Columbians first. That way, says SFU infectious disease modeller Caroline Colijn  public health could help tamp down community transmission before highly infectious variants of the virus take hold in the province.

“It’s anyone who has to have high contacts at work,” said Colijn. “Migrant workers often work in congregate settings… We need those workers to come and do the harvesting. It’s certainly worth considering.”

Colijn, along with colleagues at universities in Alberta and the United Kingdom, recently released a study arguing to prioritize essential workers over the age-based approach to vaccination currently underway across B.C.

By targeting essential workers in a vaccination campaign, older individuals were consistently found to receive significant indirect protection from the virus, according to the group’s modelling.

The pre-print study, which has not yet been peer reviewed, claims in the case of British Columbia, “vaccinating essential workers sooner is expected to prevent over 200,000 infections, over 600 deaths, and to produce a net monetary benefit of over $500M.”

But when asked whether she would reconsider moving essential workers up the vaccine queue, B.C.’s provincial health officer Dr. Bonnie Henry said Tuesday, “The short answer is ‘no.’”

“We are absolutely confident in the marrying of the vaccine we have now with the risk that we have — which is age-based,” she said.

At the same time, however, health care workers and elderly British Columbians aren’t the only ones receiving doses of a COVID-19 vaccine.

Between a rising death toll in home countries like Mexico and uncertainty over their own situation in British Columbia, migrant and undocumented workers are facing a mounting sense of anxiety, says Cruz.

To help cope, Sanctuary Health added three psychologists to its staff, despite a strong cultural aversions to counselling among Latinos.

Language barriers are also fuelling vaccine hesitancy as many in the undocumented community turn to chat groups like WhatsApp in search of information. To make matters worse, many undocumented workers come from countries where years of corruption have left little trust in authorities.

“People have a lot of fears about the vaccines,” said Cruz. “It’s not just about food… You call 811 and it’s a useless line if you don’t speak the language. It’s getting a call from a contact tracer and not understanding what they’re asking.”

Now, said Cruz, is the time for groups like his and the government to work together.

“As soon as they say the vaccine is available, we’re ready to help the government break those barriers.”