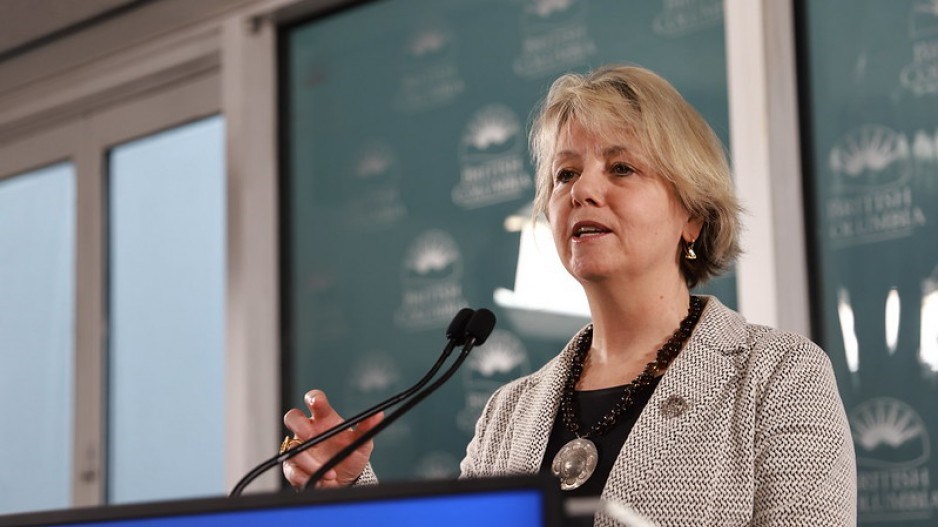 B.C. recorded 761 new COVID-19 infections on January 7 – the highest number of cases in a 24-hour period since November 27, when 911 new cases were identified.

Events are banned, although weddings, baptisms and funerals may take place with a maximum of 10 people. All gatherings before or after, such as receptions, remain off-limits.

The new cases push the province's total since the first case was detected in the province last January to 56,015, and the rise comes within the two-week incubation period that includes New Year's Eve, Christmas and other holidays.

"Our curve is trending upwards," said provincial health officer Bonnie Henry. "Now is our time to stay the course. We know what we need to do to bend that curve back down. We have been successful in doing that prior to this winter break, and we need to do that again."

Eight more seniors have died, for a total of 970 people since the first death from the virus happened in B.C. on March 9.

Nine fewer people are in hospital with the virus today, compared with yesterday, for a total of 372 people, 74 of whom are in intensive care units.

The number of those actively battling infections rose by six overnight, to 6,349.

Here is a breakdown of where the 761 new cases were identified:

• no new cases in people who reside outside the province.

Henry also provided an update on the vaccine roll-out: 41,064 British Columbians across all health regions have received their first dose since vaccinations began December 16. That is up from the 33,665 who were vaccinated as of a day earlier.

There was one new outbreak at a seniors' home: the Ts’i’ts’uwatul’ Lelum assisted-living facility in Duncan.

There are 10 hospitals with active COVID-19 outbreaks. They are:

• Vancouver General Hospital in Vancouver; and

The 12 active outbreaks at seniors' living facilities in Vancouver Coastal Health are at:

• Sunrise of Vancouver in Vancouver; and

The 27 active outbreaks at seniors' living facilities in Fraser Health are at:

• The Emerald at Elim Village in Surrey;

• The Harrison at Elim Village in Surrey; and

The four active outbreaks at seniors' living facilities in Northern Health are at:

The eight active outbreaks at seniors' living facilities in Interior Health are at:

• Sunnybank Retirement Home in Oliver; and

• Village by the Station in Penticton.

In Island Health, there are two seniors' facilities with active outbreaks of COVID-19: Chartwell Malaspina Care Residence in Nanaimo, and Ts’i’ts’uwatul’ Lelum assisted-living facility in Duncan.