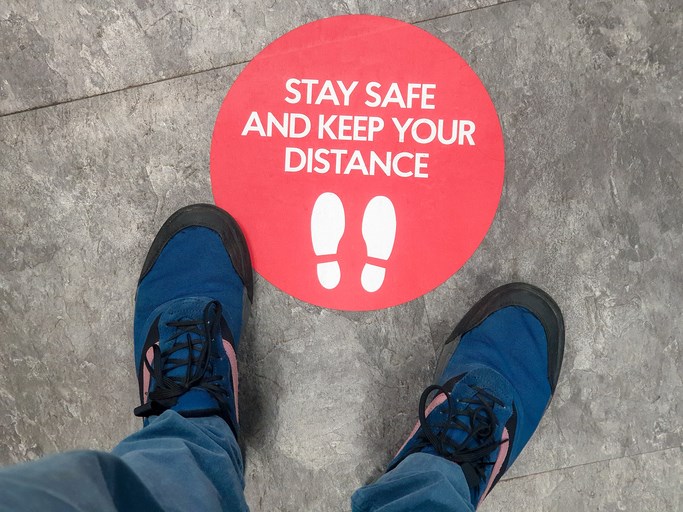 A sign on the floor of a shop, advising customers regarding social distancing guidelines.Getty Images

In the last six months, 574 violation tickets have been issued around the province for contraventions of COVID-related public health orders.

That includes 103 $2,300 tickets given to owners of businesses or organizers of events that defied orders restricting gatherings, and 21 $2,300 violation tickets for contravention of the food and liquor serving premises order, according to figures from the Ministry of Public Safety.

Another 450 $230 tickets were issued to individuals who refused to comply with direction from law enforcement, while 77 violation tickets worth a combined $85,000 have been handed out by police to individuals in contravention of the federal Quarantine Act.

Under the public health orders, police and enforcement officers, including community safety units, liquor and cannabis inspectors, gaming investigators and conservation officers, can issue violation tickets, ranging from $230 for contraventions of face-covering orders and refusing to comply with enforcement officers, to $2,300 to hosts who defy the orders.

Courts can also impose fines of up to $10,000 and a year in prison for egregious offences.

Only a small number of the offences were documented and ticketed in Greater Victoria.

“The numbers show that the overwhelming majority of the residents in Saanich are following the provincial health orders and we can only expect this trend to continue,” said Const. Markus Anastasiades, communications officer for Saanich police.

Anastasiades said to date, Saanich police have issued 14 COVID-order-related tickets, three of them with $2,300 fines and 11 with fines of $230.

Victoria police report 79 contravention incidents that resulted in just 11 tickets. Most of the violators got away with warnings, but police did hand out two $2,300 fines and nine $230 fines.

West Shore RCMP say they have issued four COVID-related fines for not wearing masks or being belligerent when not complying with regulations.

Recently, the province simplified the ticketing process for enforcement officers and added a new face-covering waiver for people who need to remove a face covering to communicate with a person who is hearing-impaired.