EXPLAINER: What we know about AstraZeneca blood clot reports

LONDON — German officials have decided to limit the use of AstraZeneca’s coronavirus vaccine in people under 60 after more unusual blood clots were reported in a small number of people who received the shots.
Mar 31, 2021 9:06 AM By: Canadian Press 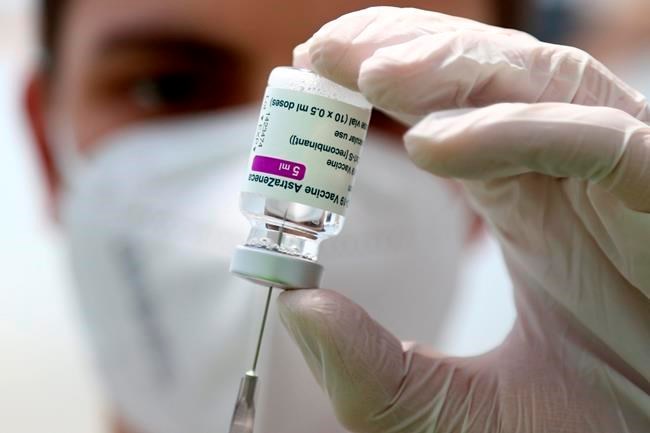 LONDON — German officials have decided to limit the use of AstraZeneca’s coronavirus vaccine in people under 60 after more unusual blood clots were reported in a small number of people who received the shots.

In response, Europe's drug regulator reiterated Wednesday that "there is no evidence that would support restricting the use of this vaccine in any population,” though an expert said more brain clots were being reported than would be expected, and it continues to investigate.

Earlier in March, more than a dozen countries, including Germany, suspended their use of AstraZeneca over the blood clot issue. Most restarted — some with the kinds of restrictions Germany imposed Tuesday — after the European Medicines Agency said the benefits of the vaccine outweighed the risks of not inoculating people against COVID-19.

But the seesawing back and forth in some countries on who can take the vaccine has raised concerns that its credibility could be permanently damaged. Here's a look at what we know — and what we don't.

WHAT HAPPENED IN GERMANY?

Earlier this week, Germany's medical regulator released new data showing a rise in reported cases of unusual kinds of blood clots in people who recently got a dose of the AstraZeneca vaccine. In response, Health Minister Jens Spahn and state officials agreed to only give the vaccine to people aged 60 or older, unless they are at high risk of developing serious complications from COVID-19 and have agreed to take the shot.

"It’s about weighing the risk of a side effect that is statistically small, but needs to be taken seriously, and the risk of falling ill with corona,” Spahn said.

Germany's medical regulator said its tally of the rare blood clots reported by March 29 had increased to 31. Some 2.7 million doses of AstraZeneca have been administered in Germany so far. Nine of the people died and all but two of the cases involved women, who were aged 20 to 63, the Paul Ehrlich Institute said.

Some clots have also been reported elsewhere, among the tens of millions of people who have received the AstraZeneca vaccine.

WHAT HAVE PREVIOUS INVESTIGATIONS FOUND?

The EMA's initial investigation concluded the AstraZeneca shot did not raise the overall risk of blood clots but could not rule out a link to rare clots and recommended a new warning be added to the vaccine's leaflet. The shot is authorized for people 18 and over.

The EMA is continuing to look closely at two rare types of blood clots, including one that affects the brain, reported in people who got at least one dose of the AstraZeneca vaccine and could update its recommendations for the vaccine next week.

On Wednesday, Dr. Peter Arlett of the EMA said that the agency is seeing “more cases of (brain clots) than we would expect to see,” and noted that more younger women have been affected — but it wasn’t clear if that was significant since younger women were also more likely to receive the AstraZeneca vaccine in Europe. He did not say how many of these kinds of clots would typically show up in the general population.

Emer Cooke, the agency’s executive director, said its experts had not been able to identify specific risk factors for those who might be at higher risk for the rare clots.

The World Health Organization's expert committee also evaluated available data for the AstraZeneca vaccine and said the shot was safe and effective. On Wednesday, Dr. Kate O'Brien, who heads WHO's vaccines department, said they were continuing to review the situation.

It's normal to continue to look for side effects as new vaccines are rolled out since they are typically tested in tens of thousands of people, but some rare problems might only occur once millions receive the shot.

HOW CAN SCIENTISTS FIGURE OUT IF THE VACCINE IS RESPONSIBLE FOR THE RARE BLOOD CLOTS?

“The way to tell if cases are caused by vaccination is to look to see if there is an excess of cases in people who have been vaccinated," said Dr. Peter English, past chair of the British Medical Association's Public Health Medicine Committee.

That will take some time. It took about a year, for instance, before scientists were able to conclude that a swine flu vaccine was responsible for some cases of narcolepsy in Europe.

Adam Finn, a professor of pediatrics at the University of Bristol, said there was no compelling evidence yet that the vaccine is to blame for the rare clots.

"The mechanism by which these blood clotting abnormalities come about, and why they affect this very small proportion of individuals, has still not been properly worked out," he said in a statement.

In a statement, AstraZeneca said it was analyzing the tens of millions of records for people who received its vaccine “to understand whether these very rare cases of blood clots ... occur any more commonly than would be expected naturally population of millions of people.”

WHAT DOES THIS MEAN FOR COVID-19 VACCINATIONS?

It's bad news. Health officials worry the repeated suspensions and restrictions for the AstraZeneca vaccine could undermine confidence in a shot that is key to global efforts to stamp out the pandemic since it's cheaper and easier to store than some others.

In Norway, which recently extended its suspension of the AstraZeneca vaccine for three weeks, officials say the confusion is prompting a wave of vaccine hesitancy.

The leader of the Norwegian Association for General Practice, Marte Kvittum Tangen, told broadcaster NRK that resuming the vaccination with AstraZeneca “will be very difficult if we want the greatest possible vaccination coverage in the population in the long run.”

Finn, of the University of Bristol, said the biggest health threat to the world is currently COVID-19 and that any doubts about the effectiveness of authorized coronavirus vaccines is problematic.

“We need to stay focused on the need to prevent (COVID-19) taking millions more human lives before it is brought under control, and the only effective way to do that is through vaccination,” he said.

Associated Press writers Frank Jordans and Geir Moulson in Berlin and Jamey Keaten in Geneva contributed to this report.

Facing the music: Summer concert festival organizers see no path ahead in pandemic
Apr 15, 2021 10:59 AM