A family that trains together, stays together 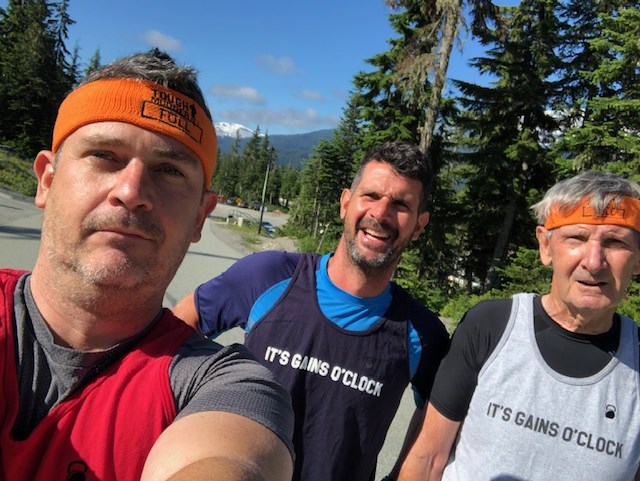 Daxton Curry (left) with his brother, Scott, and father, Royce, after completing the Tough Mudder event in Whistler.Daxton Curry

In the spring of 2019, SwimBowen received registrations from two sons and a father. Event organizers were intrigued: there must be a story there, they thought. Sure enough, there was.

Daxton Curry is the older brother and as a Bowen Island resident he was the one who brought up the idea of participating in SwimBowen. Daxton and his siblings swam competitively at the local YMCA as kids. As he tells it, his younger siblings Scott and Samantha were more competitive than he was. As a teenager, their dad, Royce, was the provincial swim champion in the province of Bay of Plenty, in New Zealand. Royce’s brother took his swimming career to Oregon State University, and went on to  become an elite swimming coach himself - eventually acting as the head of development for the Canadian Olympic Swimming Team.

Competition is obviously a strong thread in the Curry family’s story. It is almost as strong as swimming. These days, however, the thing that really stands out about the Curry clan is how they support one another to stay fit and keep laughing.

After a decades-long break from any kind of competitive swimming, Scott started competing in triathlons.

“I started swimming about 20k per week when I started doing triathlons,” says Scott. “I also started running, and racing, as part of my training regime. I would run a 10k or a half marathon almost every week, and I encouraged my Dad to join me, even if he just wanted to walk the race. I figured I could help him get back in shape and we could spend time together, maybe grab a beer together afterwards.”

Before long, Royce started setting goals for himself.

Royce, Daxton and Scott trained together. As a trio, they entered eleven half-marathons.

“Scott would be suggesting crazy things like warming up for a race by running a quick 5k,” says Daxton. “Meanwhile Dad and I were making plans to sneak off for brunch.”

And while Daxton’s official job was to be his dad’s pacer, the two ended up keeping one another motivated.

“One race I’d be struggling to finish and the next Dad would feel like he didn’t have enough,” says Daxton. “But we’d always fuel each other just enough to get over the finish line. I’d say we went fast enough to break a sweat, but slow enough that he could provide me with life advice along the way.”

When Daxton suggested they participate in SwimBowen, Scott said “yes” right away. Royce did not join the first year (2018), but did take the leap in 2019. When he did, Royce was shocked by the temperature of the water, but still managed to complete the event.

“By the time Dad and I finished,” recalls Daxton, looking back on the 2019 race. “They were handing out prizes to the winners.”

Royce, Daxton and Scott were all disappointed to not be able to participate in SwimBowen the summer of 2020. The pandemic has shifted their ability to train together, but they’re doing the best they can on their own. Scott is finding creative ways to stay in shape so that he can participate in the Boston Marathon, the Ironman Canada event and Ironman International events - which he’s hoping will happen this summer. Daxton’s goal is to get up and down Mount Gardiner in an afternoon, so that he can pick up his daughters from school. Meanwhile, Royce enjoys running through Porpoise Bay Park near his home on the Sunshine Coast.

“When you’re in your 80s, it is important to stay fit,” says Royce. “And a healthy lifestyle is something I always worked hard to impart upon my kids. That, and supporting others.”

Royce Curry will turn 82 in May.