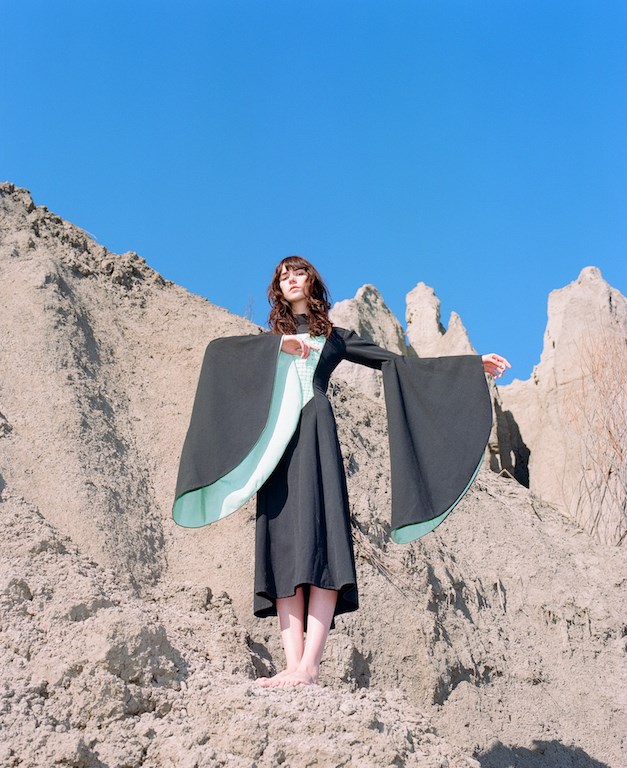 Bowen-raised musician Lauren Spear, known by her band name Le Ren, was about to leave for Los Angeles to record her first album when COVID-19 hit.

So she pivoted. Over the course of three days in Toronto, just before heading to Bowen to isolate with her family, Spear recorded her first digital-release EP, Morning & Melancholia. Where there would’ve been studio musicians, there’s just Spear and the producer, engineer and player of steel pedal, guitar and piano Aaron Goldstein.

A single from the EP, “If I had Wings,” was released this week while the entire four-song EP is coming out July 31.

Folk with a bit of country and a bit of bluegrass, Spear described her latest endeavour.

Spear grew up on Bowen playing a lot of music with her family. Her mom (Dyan) brought her to bluegrass camp in Sorrento and her dad (Ted) taught her how to play guitar. After high school, Spear moved to Montreal and was quietly playing music until two years ago.

After a bad breakup, Spear decided to put her music out into the world. “It was just a way to work through those feelings,” said Spear. “I was like, ‘I’ve got nothing to lose, I’m just going to start releasing music.’”

After an ex-partner died in a car accident, Spear started writing about that. “It’s just been a way to self soothe and work through things that are going on in my life,” she reflected.

The title of the EP Spear adapted from Sigmund Freud’s 1918 essay “Mourning and melancholia” about the ways people experience grief.

“Grief is such an interesting thing and it changes day to day,” said Spear.

She clarified that the title isn’t to endorse Freud’s larger body of work but rather she used the book to consider her own grief and mourning. “Music, it’s a source of comfort for me,” said Spear. “It’s nice to create a song and then…if it was written in a moment of deep sadness or whatever it was, to move away from that and then come to it anew and experience it in a different way.

“A theme that I talk about in the EP is when someone passes away being the sole keeper of a shared memory and how memory changes.

“When you only have one side of the story, it’s like a great weight and responsibility to get it right and remember it right,” said Spear. “Because our memories are so slippery."

Spear signed with the American label Secretly Canadian and the Canadian label Royal Mountain and had been all set for the album when COVID disrupted the everyone’s plans.

“This period has been a very interesting time for musicians because people are working with limits,” said Spear. “There’s this idea that if you’re making a big record, then you go somewhere to do it and you use people from L.A. like I’m doing, but that’s not the way that has to be.”

“I think what I’m learning is how many resources I have all around me all the time and how creating a sense of community in music is so important and to work with people that are close to you.”

Now, for the first time in a decade, Spear is back living with her family on Bowen, including her older siblings, Bowen’s filmmaking twins known as the Spear Sisters (who filmed part of the music video for “If I Had Wings.”)

“I look up to my parents and my sisters so much and they are just always working and creating so I guess that fostered this need to make things,” said Spear. “ But I’ve also always had such support from them and the community growing up here.

“I think you have a twisted sense of how you’re doing because everyone’s just so behind you.”

But also on Spear’s mind these days is the style of music she plays as a white musician in Canada. “I’ve been doing a lot of research on the history of bluegrass and country and folk and there’s a lot of Black artists that have been teaching me a lot about the true history and the erasure of Black artists within the genres that I play,” she said. “That’s definitely been on my mind. And something I think that all musicians should consider.”

“It’s made me want to reconsider my position in the industry and make sure that I’m elevating [Black, Indigenous and People of Colour] voices as much as I can,” she said. “Also figuring out systems of oppression within the music industry and understanding how to dismantle them and also paying tribute to the people that shaped the music that I play like Arnold Schulz…the true father of Bluegrass.”

Spear is donating her share of the royalties from “If I had Wings” to the following organizations: Taking What We Need, Vancouver Black Therapy and Advocacy Fund and Black Women in Motion.

The album in L.A. is still in the works for when the situation is safer.