The Union Steamships Company was a vital link up and down the coast before it ever got into the tourism business
Dec 7, 2020 2:48 PM By: Catherine Bayly / Bowen Island Museum and Archives

Before it ever got into tourism, Union Steamships served communities up and down the B.C. coasline, even heading up to Alaska and the Yukon during the Klondike Gold Rush. ‘The Union Steamship Company (USSCo) did for the coast of British Columbia what the Canadian Pacific Railway did for Canada,’ writes Catherine Bayly. (Photo: Bowen Island Museum and Archives)

The following is part of the Undercurrent's special 100th anniversary of USSCo. & Bowen Island feature. ​​​​​​​

The Union Steamship Company (USSCo) did for the coast of British Columbia what the Canadian Pacific Railway did for Canada. It connected previously difficult to access coastal settlements to the province’s largest city, Vancouver. For 70 years, 1889-1959, the Unions’ black and red funnelled steamers sounded their trademark whistle - one long, two short, one long - up and down the coast. They made weekly stops at logging camps, canneries, mines and small settlements between Vancouver and the Alaska Panhandle. The Union was the first line to use Vancouver as its port where they picked up and carried passengers, freight and mail to and from the Union Dock located at the foot of Carrall Street.

The company began by offering local service on the Burrard Inlet but when gold was discovered in the Klondike they quickly expanded to include transportation to Alaska. By 1897 the USSCo had outfitted two of their steamships with crude berths for passengers to make the run to the mouth of the Yukon River. In 1898 the Capilano 1, Coquitlam, and Cutch made regular trips to Skagway and Dyea loaded with hopeful miners and their gear, horses, cattle and other provisions. 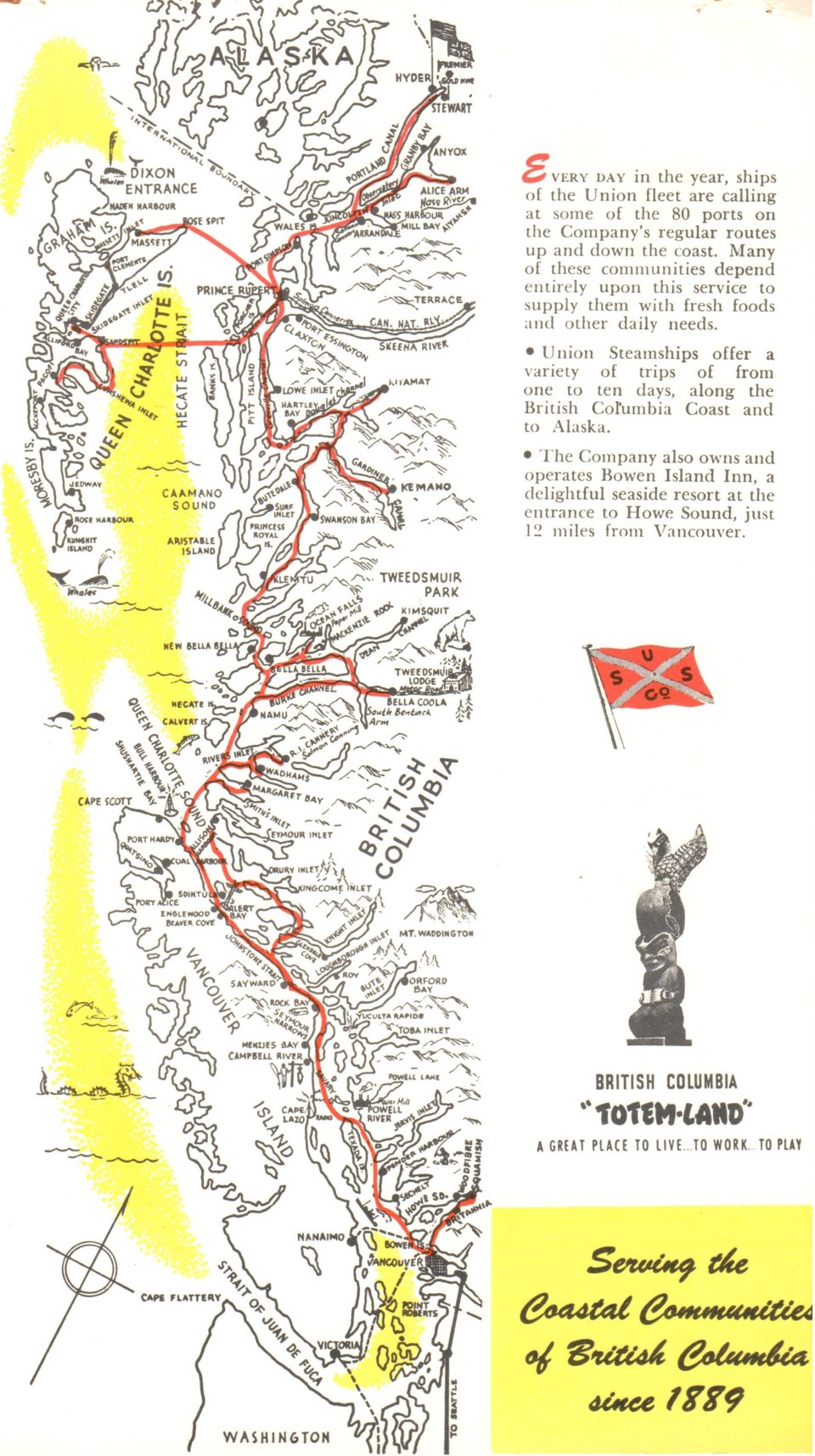 In the early 1900s the USSCo continued to open up the coast by providing regular services to Prince Rupert and the canneries of the Skeena and Nass rivers. They stopped at the communities at Klemtu, Hartley Bay and Kitimat and the new northern settlements at Namu, Bella Bella, Bute and Knights Inlets, Alert Bay, Sointula, Hardy Bay and Bella Coola. The steamships carried topsoil, livestock, produce, mail, machinery, coal and workers to the canneries and logging sites and returned with salmon. They also hauled the supplies necessary for the early pioneers to establish homesteads. By the 1920s the steamships called at over 150 ports and settlements up and down the coast.

Most of the USSCo vessels used for servicing logging camps and pioneer settlements were small, rough steamships. They had to be large enough to cross the Queen Charlotte Sound and small enough to squeeze into the canneries and logging sites. One such vessel was the wooden-hulled Cassiar, outfitted for transporting the loggers between Vancouver and camps. On this ship loggers were allowed to wear caulk boots onboard, and even to bed. It was equipped with an onboard bar and jail. The rules of conduct for this loggers ship included that stewards were not to be pitched overboard.

Most logging camps were remote, without access to local pubs. Some of these faraway ports found unique solutions to allow extra time for loggers to quench their thirst. For a bar on a ship to remain open Marine law required that the ship be in motion so they installed two docks, about 100 yards away from each other and the ship travelled at “drinking speed,” allowing the bar to remain open longer. Of course should anything get out of hand, the onboard jail came in handy.

At the outset tourism was a side market for the company. In 1917 the USSCo expanded their market and purchased the All Red Line and Selma Park south of Sechelt, followed in 1920 with the purchase of the Terminal Navigation Company and one thousand acres on Bowen Island. By the late 1920s and 1930s the company’s shipping business began to decline and the company’s focus shifted in earnest to tourism. This was the start of USSCo’s long and prosperous passenger and tourism industry.

The company carried on through two World Wars, supplying the logging, fishing, and up-coast communities and transporting tourists but began to flounder in the 1950s. The steamships were aging, the canneries were closing, small airplanes were flying in and out of camps and reliable outboard motors meant that operators of a small logging camp could transport workers and goods. They no longer relied on the Union Steamships. The improvement of the road network into the province’s interior during the post-war period brought a sharp decline in the coastal resort traffic and the Union Steamship Company’s shipping and resort business came to an end in the late 1950s.

There is a large, informative panel about the history of the Union Steamship Company installed in the Davies Orchard that is well worth exploring on a nice sunny day!