Did you get a look at the Coast Guard hovercraft in Snug Cove last week?

Canadian Coast Guard Hovercraft Siyay was part of a medical evacuation exercise organized here on Bowen at the request of the BC Emergency Health Services (BCEHS) on Dec. 11.
Bruce Steele Dec 18, 2020 3:49 PM

Canadian Coast Guard Hovercraft Siyay was part of a medical evacuation exercise organized here on Bowen at the request of the BC Emergency Health Services (BCEHS) on Dec. 11.

The exercise was to review important processes and protocols for the potential task of transporting critically injured patients on Bowen Island to medical services on the mainland in extreme weather.

The vessel was deployed from its homeport at the Sea Island Terminal in Richmond and proceeded to the Tunstall Bay boat ramp as well as the Snug Cove beach. 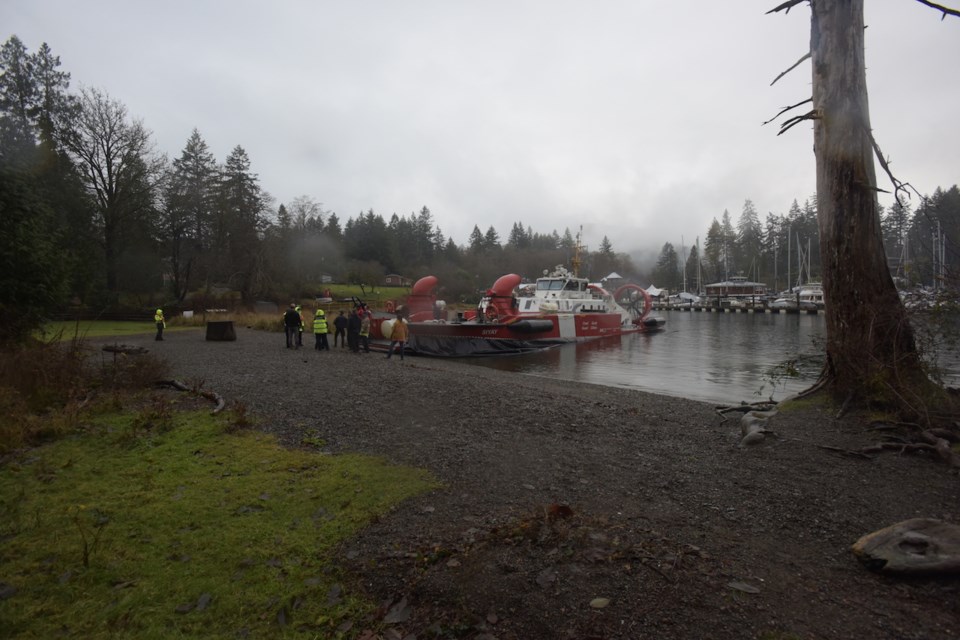 The Siyay is an air cushion vehicle (ACV), which operates in high winds and rough waters, as well as on somewhat smooth land such as beaches and grass, riding a fan-generated cushion of air escaping from beneath a flexible inflated skirt. During the exercise, this hovercraft landed safely and relatively easily on both beaches proving it could be deployed here on Bowen if necessary.

Forward propulsion is provided by two variable pitch propellers on the stern.

The two hovercraft serving our region, the Siyay and Moytel, have hydraulic cranes for salvage work, which, when removed, allows a total payload of 25,000kg on the forward deck. In the exercise scenario a BC Ambulance was its cargo with a patient being transported safely within, protected from inclement weather.

This particular ACV model was launched in 1998 and built in Wheatly, ON. The top speed is 48 knots or 89 kph with fuel capacity of 18,920 litres. The operational time is determined by many factors related to speed, distance and weather. It’s powered by four V-12 Caterpillar diesels, producing a total of 2818kw or 3779hp. Its length overall is 28.5 m by 12 m wide. 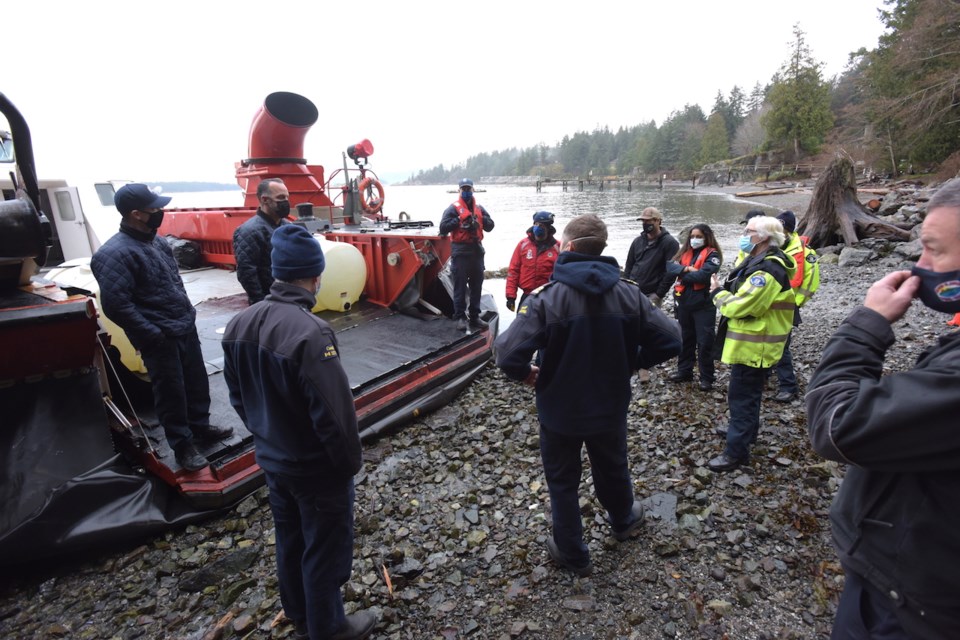 The Siyay has a total crew of seven, consisting of two pilots and five crew with search and rescue and diver training. It can also operate as a mobile hospital, with medical space housed within the deck level forward cabin and crew’s quarters. Each crew member is trained for the many critical, life-threatening situations they could be tasked to perform.

The ACV’s duties also include search and rescue, aids to navigation maintenance, pollution response, fisheries patrol and enforcement and many other tasks as required by first responder agencies delivering services to islands such as ours and the southwest coast-Pacific region.

This exercise was very successful and many lessons were learned by the various emergency response personnel of Bowen who participated. Our first responders may call upon the hovercraft to provide this invaluable service to human life in the future when the weather or a unique situation requires it.

Many thanks to the captain of the Siyay and the knowledgeable deck crew for their attendance and the logistical information provided.

And a special thanks to Gale Lyttle from our BC Ambulance Station 225 here on Bowen for organizing the exercise event.