Explore the wild wonders of Bowen every week

Every week, Emily van Lidth de Jeude and her son Taliesin explore the incredible ecosystems at our doorsteps
Nov 14, 2020 2:03 PM By: Bronwyn Beairsto 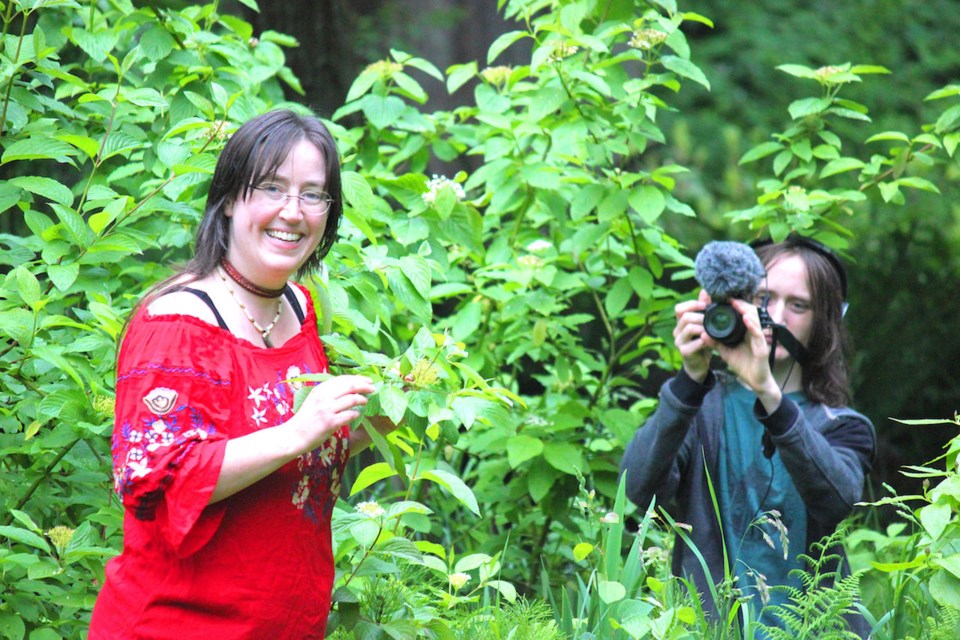 When the pandemic hit, Emily was in the midst of her spring break Wild Art camps and had wild food tours and wilderness workshops planned. COVID-19 put a stop to it all.

“I felt terrible, cancelling things that people really wanted to do,” said Emily, who is also an explorative learning consultant. “Partly just because I felt bad that I had to tell them it was cancelled but partly because I really run the program with a desire of helping people feel at home in our ecosystem.”

So, like many did in those early days, Emily went virtual and launched a YouTube series of 10 to 20 minute videos: Outdoor Exploration with Emily.

“I just had to do something,” she explained. “I couldn’t…just cancel my entire business and do nothing.”

From the critters of mine adits, to the depths of her woodshed, once a week Emily trains her voracious curiosity and deep knowledge of the island’s environment on some aspect of Bowen’s outdoors.

“So that at least people who couldn’t do programs could have something to look at and hopefully get themselves out in the wilderness by themselves or with their families,” said Emily.

While Emily is the on-camera personality, her son Taliesin , 18, is the other half of the project, doing all of the camera work and all of the editing.

“I think it’s an interesting challenge for him,” she said. “And he definitely cares that people learn to love and respect our environment.”

“I feel so blessed that my son actually wants to spend time with me…and I think he appreciates it, too.”

While mother and son will argue about what will or won’t work on camera, they always get through it. “Because you have to make a video. And actually, it’s been wonderful for our relationship.”

Some weeks they just pick a place to explore (like this week’s trip to a creek that found the scars of a century-old forest fire, a rutting buck and a creek that picks its way through fallen alders and gravel banks). Some weeks there are guests (like mushroom hunter Stephanie Carruthers), other times they go looking for something specific (like the week of the white slug video where they couldn’t find a white slug). Some weeks stick to the garden or chicken coop, other weeks involve traipsing through fields of foxgloves. (How poisonous are they really?)

Having grown up on-island, sometimes Emily is surprised by what’s common knowledge and what’s not. “I’m never actually sure what the hidden gems are,” she laughed. “Sometimes I think I know something nobody else knows and I go there and then there’s someone else there.”

But then there are places like the dump road. Emily thought just a few people might not know that the pristine Crippen Park path beside Killarney Lake had once led to a dump. But, as it turned out, “Hundreds, at least, of people walk by [the old dump] all the time and never knew it was a dump.”

“It’s my life’s passion to help people learn by exploring and teaching our kids, our students by letting them explore instead of by telling people facts,” she said. “But when you get out there, especially doing something like a wild food walk, where people just want all the information, it becomes a burden almost, to feel like you have to know everything.”

Emily would get stressed when she was unable to find the name of a mushroom or a type of beetle but has accepted that she’s not making polished films set to music à la Bob Turner but a different kind of explorative undertaking. “I don’t know,” comes easier now.

“Philosophically, I understood that that was a good thing for educating people before, but now I think I understand it more personally.”

1
Bowen Islanders will be able to get vaccinated on island
2
Verdict in Toronto van attack case and new vaccine arrives: In The News for March 3
3
Seniors line up at COVID-19 vaccination site in York Region, families express relief
4
Bowen Island sex offender found not guilty of probation breach
5
‘It’s pretty amazing, this island’: Bowen Islanders step up to help local man who has brain cancer