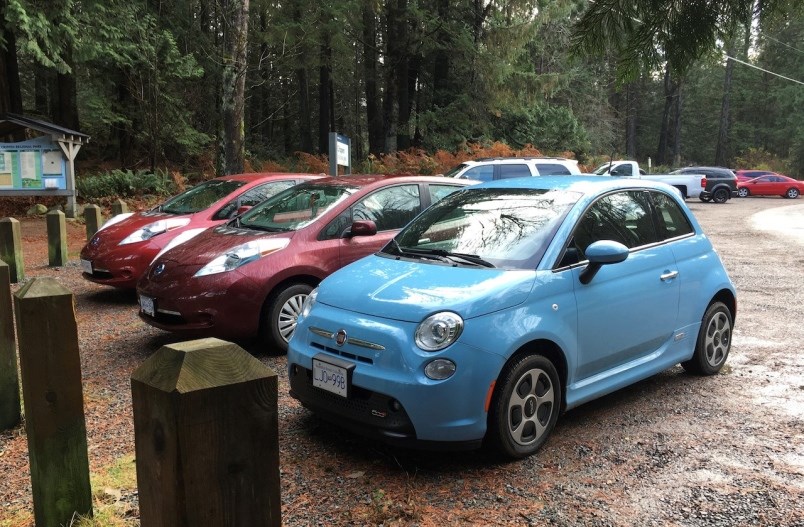 The robin’s egg blue Fiat that has charmed Peter Wing and Claire Weeks. Photo by COURTESY OF PETER WING

Until a month ago when we bought our robin’s egg blue electric Fiat, pictured here in the simpatico company of two Nissan Leafs, we had not owned a car for nearly 25 years. We generally managed very well without one but would rent for short periods of time as needed, not infrequently when coming to Bowen with our cat who didn’t like travelling by bus from our condo in Vancouver. Our local Avis franchise in town was kind to us and always seemed to have one available at a moderate price. Renting proved to be simpler, cheaper and far more flexible than owning, as we could choose the kind of vehicle we needed.

Not having a car, we walked and cycled a lot and this was both fun and healthy. But, well into our 70s now, we realized that diminishing mobility would likely become an issue for one or the other or both of us, so we decided last fall to take advantage of the BC Hydro rebate to install a type two charger here on Bowen. We were able to buy from a Canadian online distributor at a discount price in the pre-Christmas sale and had a very professional installation done by Bowen‘s Tyler Jacquette in time to get our $700 rebate. But we still had no definite plans to get a car, despite having taken several for test drives last year.

When the pandemic struck in earnest this spring, we decided to spend all our time on Bowen where we felt far safer. We rented a big car in Vancouver, delivered a load of clothes, staples and gear of various kinds to Bowen, then returned the rental vehicle and cycled back to Bowen. We took advantage of the generous delivery services of the Ruddy and the General Store and put in a large order to them alternately, each week. Otherwise, we made our way around the island on foot and on bikes, mostly for recreation and always safely isolated from others.

Four weeks ago, in Vancouver for the first time, we were walking near Cambie and Broadway, when Peter suggested to Claire (reluctant to buy any car) that maybe, with increasingly wet and dark weather, it was time to seriously consider buying a car. We agreed that we would consider only an electric car for environmental reasons, and that we’d want one that was fun to drive, small, cute and stylish…kinda like the Fiat 500 that was parked right next to us as we chatted!

Peter is somewhat caffeine intolerant and had too much dark chocolate after supper that night. Eyes wide open after half an hour with the lights out, he checked Google and YouTube and learned that a number of 500e Fiats were available for sale in the Vancouver area. We learned that this little car was produced from 2013 to 2017 by Fiat Chrysler in North America, in order to drop the fuel consumption average for the fleet from that manufacturer to comply with state regulations in California and Oregon. Dubbed “compliance cars”, they were lease-only, for three years. Those cars now available in Vancouver were coming off lease, mostly with only 20 to 30,000 kilometres on the odometer, and were selling for about one-third the price of a new midsize Battery Electric Vehicle (BEV) from one of the other major e-car manufacturers.

YouTube reviews of the Fiat 500e by the owners were enthusiastic, and we found no mention of problems such as the rare battery fires described from some manufacturers. The battery packs and transmissions were developed and produced by Bosch, and the low centre of gravity with an upgraded suspension reportedly made the car responsive and a delight to drive. Its quite limited range of about 120 kilometres is fine for a day traveling around Vancouver or Bowen and commuting between the two. Only one person acknowledged a battery problem early on which was quickly remedied under warranty. Furthermore, it now appears that expertise in the private sector has enabled battery repair if one or two cells become faulty. No-one has described early failure of the Fiat’s liquid-cooled battery.

We have now put a few hundred km on the car, our perfect island car. The cost of recharging it from empty for four hours on our type 2 charger has turned out to be about $3 or $4 on the higher step rate charged by BC Hydro. We’re adjusting to the G-forces as it accelerates…even up the 16 per cent grade out of Bowen Bay, and, although the energy cost of this is steep, we love to watch the anticipated range increase with regenerative braking on the steep downhill run home. It is quiet. It has four seats – the rear two meant for smaller folks and shorter distances – and with the two rear seats down easily accommodates a couple of months recycling.

ICBC stats for 2019 showed 58 electric and 77 hybrid vehicles registered on Bowen. We wonder how many more Bowenites, other than the owners of the Leafs shown in the photo, have adopted e-vehicles and what the owners’ experiences are. Perhaps the Undercurrent would like to investigate?