Hair frost vs. hoar frost: do you know the difference?

As temperatures drop, keep a lookout for these two types of frost during your winter walks.
Nov 30, 2020 1:55 PM By: Alan Whitehead / Bowen Nature Club 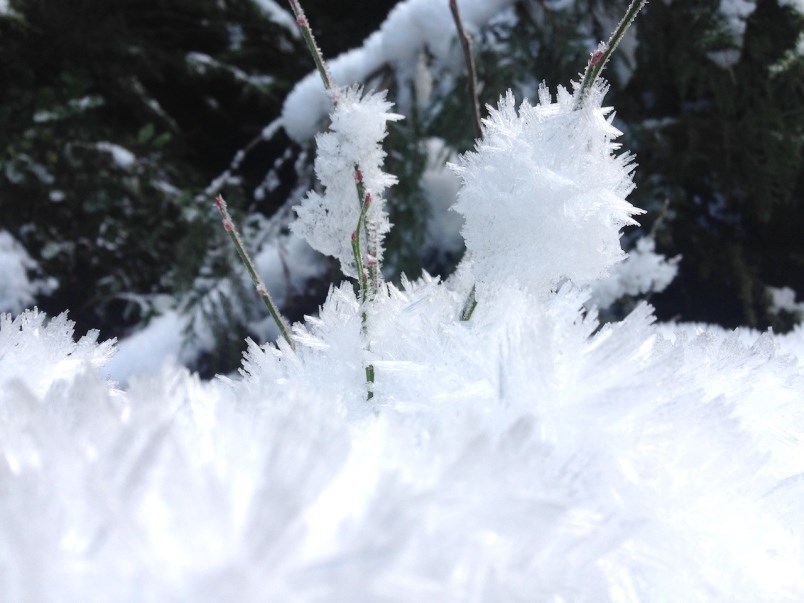 Hoar frost forms from water vapour in the air. Photo by ALAN WHITEHEAD

Hoar frost is the most common; it occurs most often as patches of white in open, low-lying areas where freezing air pools overnight. It becomes more widespread when the entire land surface is exposed to sub-zero temperatures.

Hair frost, on the other hand, is less obvious though not uncommon under specific conditions in our moist forests. Whereas hoar frost can occur throughout the winter and shoulder seasons when temperatures dip below zero Celsius, hair frost seems to be limited to the early part of winter, while there is still a lot of moisture in the undergrowth. Their origins are quite different.

Hoar frost forms when water vapour in the air that, in the process of freezing, condenses directly into ice on solid surfaces that are also frozen. In fact, under certain conditions, when air currents deliver new moisture, hoar frost can form again on top of older frost or snow, creating a beautiful landscape.

Hair frost originates, not from water vapour, but from water contained within dead twigs and branches, particularly of red alder, that have been soaked through by the rains. This internal water expands as it freezes and, as a result, gets extruded through the pores of the wood’s cellular structure, forming thin white hairs. These hairs can continue to grow until all the water in the saturated wood has been expelled. In some situations, the hairs take on the appearance of dense whiskers, much like a moustache. However, the moustache will quickly disappear when melted by the breath of a human or other warm-blooded animal.

As temperatures drop, keep a lookout for these two types of frost during your winter walks.

Nature Matters is an occasional column of the Bowen Nature Club, dedicated since 1985 to the enjoyment, understanding, and preservation of Bowen’s diversity. For more information: bowennatureclub.blogspot.com.