How long have beavers been on Bowen Island? 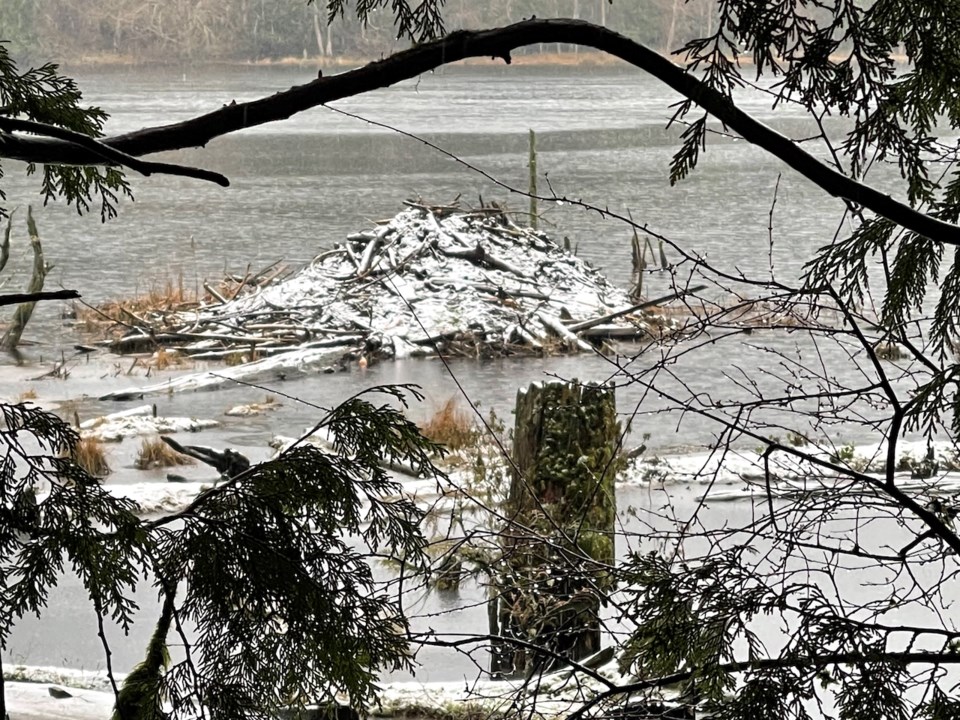 Snow on one of Killarney Lake's beaver lodges in January 2021. Other lodges with underwater entrances are excavated into the lake bank. Alan Whitehead

There were no beavers on Bowen Island / Nex̱wlélex̱m when my young family and I moved here in the early spring of 1988. Beavers first appeared, if memory serves me, in the early 1990s in the Lagoon and soon moved upstream all the way to Killarney Lake. Long-time residents told me there had been muskrats, which had been trapped out in the first half of the 20th century, but told no similar stories of beaver. Fast-forward a few decades and beavers, their dams, lodges and cut vegetation can be found in many places, especially though not exclusively in the Killarney-Terminal watershed. 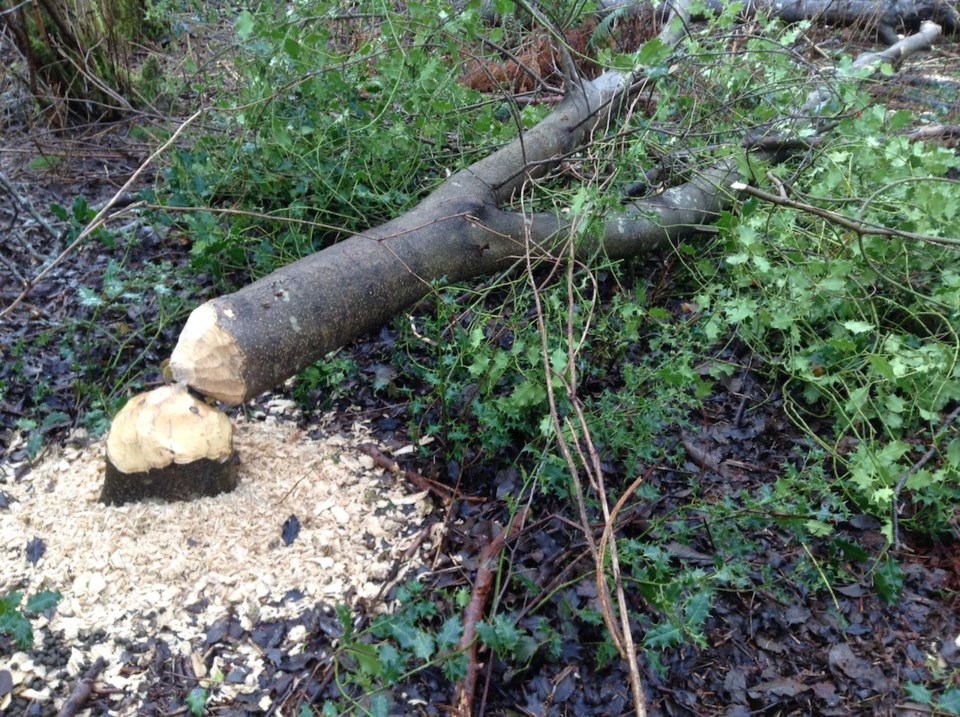 A beaver-cut holly tree at Grafton Lake. Beavers feed on the inner bark, green twigs and shoots. By Alan Whitehead

There is a ton of fascinating information on beavers, on the internet and in libraries. What interests me here, though, is their history on Bowen Island. Were they present before the early 1990s? Where did they come from? How did they get here? Are they here to stay? My hypothetical answers below, which admittedly may be incorrect, are based on the stories I’ve heard, reviews of beaver ecology, and personal observations on- and off-Bowen over the years, not to mention a liberal dose of speculation.

The beavers’ arrival in the 1990s was on the east side of Bowen via Deep Bay. It is, therefore, very likely that they must have come from the Fraser valley lowlands, where beaver populations have been increasing over the past century as a result of the decline in trapping, construction of drainage canals, and other changing land uses. Beavers are strong swimmers. Although they live in fresh and brackish water, they are known to cross significant spans of saltwater; this happens particularly when the young adults are dispersing away from their birth habitat after their second year. Beavers have no trouble navigating the waters between the mouth of the Fraser River and Bowen Island and beyond. 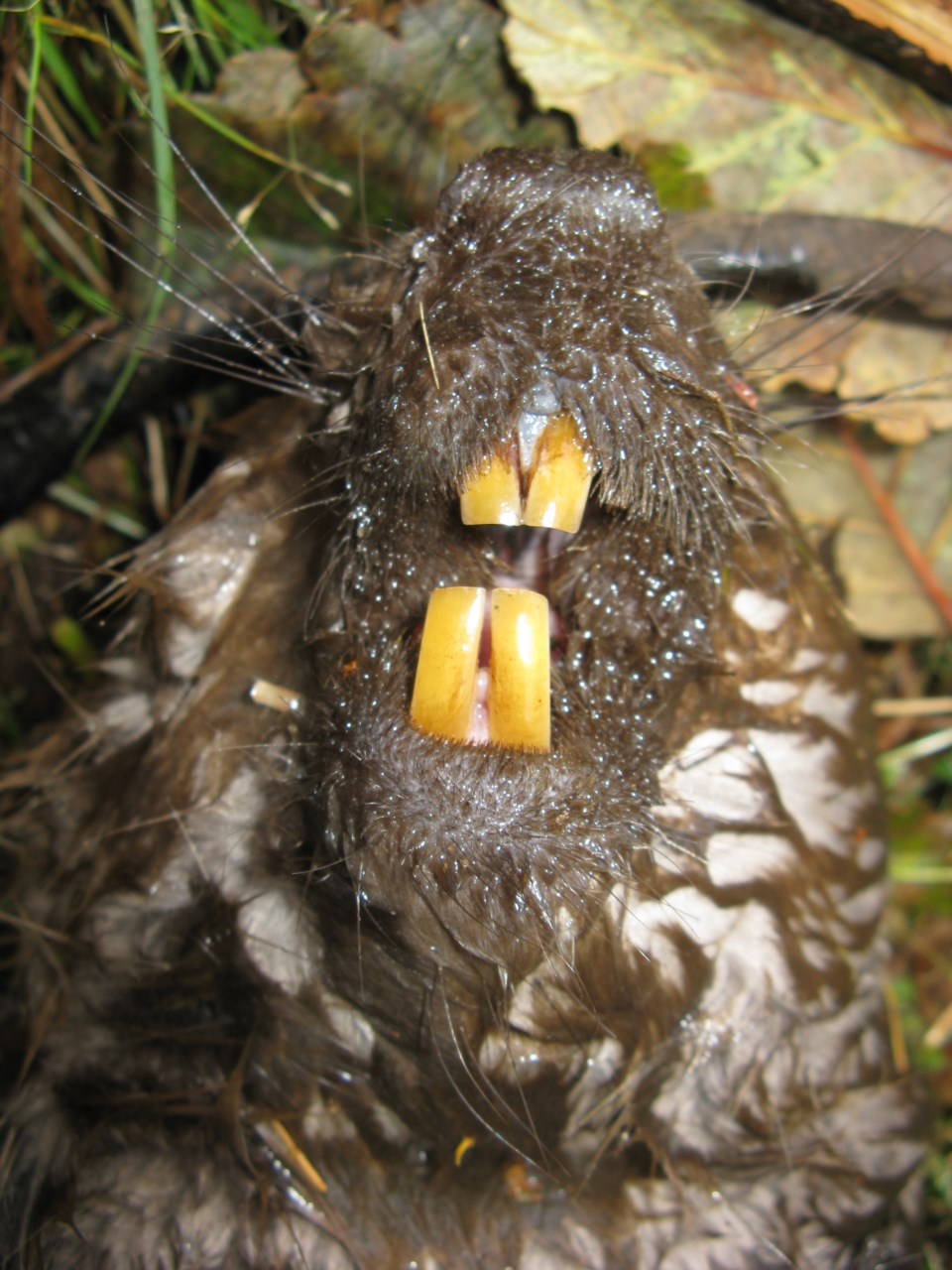 The sharp incisors of a beaver grow continuously. This young beaverwas found dead in Killarney Creek above the Lagoon in October 2012,probably drowned after getting caught in a log jam. By Alan Whitehead

Initially, based on the old-timers’ accounts, I thought that beavers may never have been present on Bowen until the last decade of the 20th century. Mature coniferous forest in a mountainous setting with few permanent streams does not normally provide ideal beaver habitat. Once I started to explore the island, however, I discovered what appeared to be the remains of three ‘ancient’ beaver dams at the marsh known as Mud Lake, above Killarney Lake on the west side of Collins Mountain. The uppermost dam retains water in Mud Lake itself; the next two create the ponds at the headwaters of upper Honeymoon Creek that flows into Honeymoon Lake. Growing along the crest of each dam is a line of several large red cedar trees. Their large diameter, up to about 18 inches, suggests that the dams have been there since well before the early 1990s. Currently, descendants of the latest wave of immigrant beavers have again taken up residence at Mud Lake, where a lodge and beaver-cut trees can also be seen. Other ancient beaver dams, or their remains, may also have been present elsewhere on Bowen. However, all of the island’s main lakes, which are the obvious places to look for beaver history, have been dammed for human water supply; the higher water levels and natural decomposition would have erased any traces of dams or lodges or beaver-cut stumps. 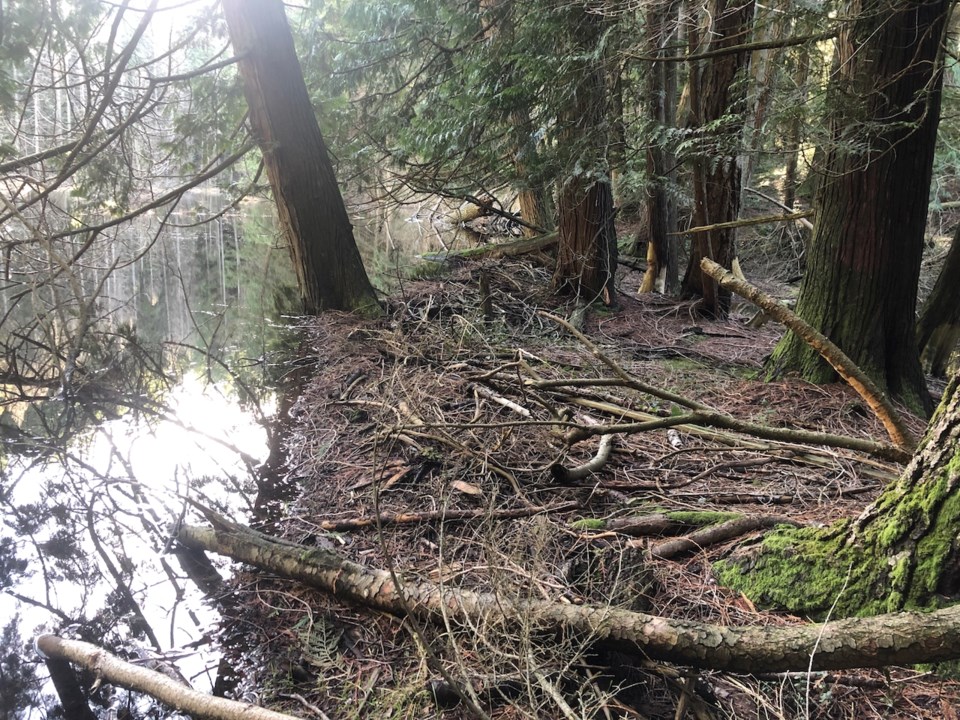 Mature western red cedar trees growing on what may be the remains of a pre-1990s beaver dam at Mud Lake. January 2019. By Alan Whitehead

Are the beavers now here to stay? Yes, but only in the best habitats. Judging from the large girth of some of the cedars that have been gnawed as a source of bark for food, I suspect that life is not easy for the young beavers that, during their dispersal, try out the more remote locations. In these areas, the preferred forage plants are scarce, and streams and wetlands tend to go dry during the late summer and early fall, leaving beaver dams temporarily useless. In the prime habitats, however, such as Crippen Regional Park, the new municipal park at Grafton Lake, and possibly other existing and future protected areas, beavers will likely endure thanks to the continuing abundance of year-round food and shelter habitat and a connection to Howe Sound for dispersal and recruitment of mates to maintain genetic diversity.

Please feel free to help us fill the gaps in Bowen Island’s natural history. To contribute any additional information that you may have on the history of beavers and their present distribution on Bowen Island, you can contact us at BowenNatureClub@gmail.com. 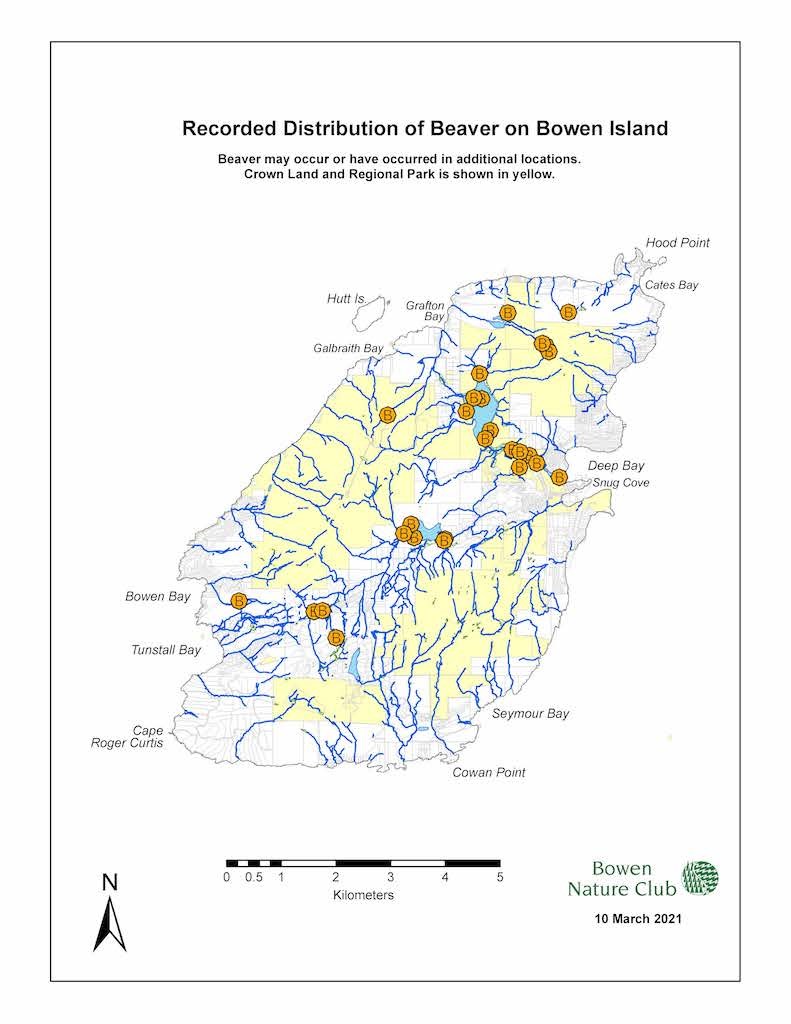