Sacrifice trees to save your home: the necessity of firesmarting

As Bowen was shrouded in a hazy reminder of an ever-growing fire season last week, Audrey Grescoe outlined the steps you can take to protect your home
Aug 24, 2018 4:00 PM By: Audrey Grescoe 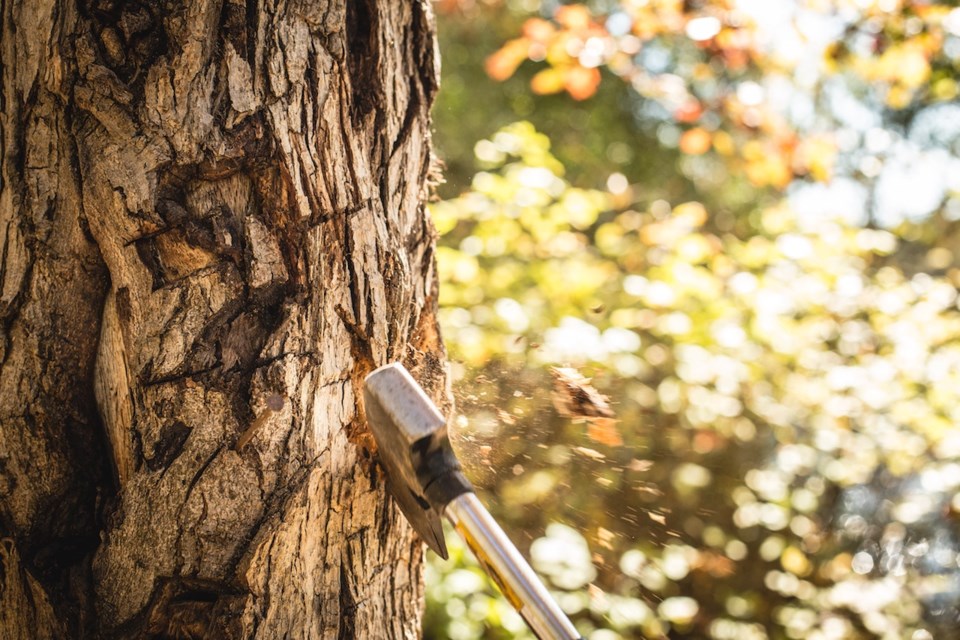 A week ago my husband Paul and I went to the satellite firehall on Adams Road to hear a talk about wildfire on Bowen. I wanted to know what plans had been made to evacuate the island, or part of it, if we were hit with a wildfire. Instead, the 30 or so islanders present were told about our obligation as homeowners to prevent our houses from catching fire.

The presenter that night was Bruce Blackwell, a professional forester and biologist who has spent his entire career studying fire ecology in B.C. In 2007, he wrote Bowen’s Community Wildfire Protection plan, a 70-plus-page document available on the web (and worth examining.) As fire seasons grow longer and B.C. is in yet another state of emergency (with more than 600 fires being fought in the province,) our community needs to take action on a protection plan.

While the probability of fire here is considered low to moderate and the risk of a lightning strike is lower than in the interior, coastal forests do get dry. What we have to worry about is a house fire spreading to the forest, the consequences being high because of the number of houses that might be lost.

Over many years the province has suppressed fires in order to sustain forests, but in doing so we have created a fuel load of unburned debris.

Since 2003, the province has experienced at least four “significant” fire seasons. There was a time when the fire season lasted for 20 days; it is now 50 to 60 days long. The trend seems to be that every year we have a lot more fire.

As I write this, no firefighting resources remain on the coast, either men or equipment. Speaking specifically about Bowen, Blackwell said we are on our own because all the firefighters are in the interior. The volunteer firefighters attending his talk, he suggested, would be ensuring the safety of their own families.

In a wildfire emergency, Blackwell said, “The fire department is not coming to save your house.” They will be too busy trying to stop the fire from spreading.

Even though evacuation is one of the most significant issues on Bowen, Blackwell explained that my fear of an island-wide evacuation is unrealistic. The Bowen community is made up of small islets of development intermixed with the forest. This exposes us to interface fires.

For instance, a house fire growing out from a neighbourhood into the forest. This would perhaps require a limited evacuation.

While Bowen has no formal evacuation plan, one is to be drafted beginning early in 2019. In the meantime, Blackwell endorses the idea of heading for the ocean, with an added warning not to go west where, because of prevailing winds, a wildfire is most likely to arise.

Since the risk of such a fire on the island is low but the consequences are high. You can mitigate your personal risk by focusing on saving your home.

If we could convert all of the island’s houses to non-wood roofs, the community would fare better in an interface fire. Blackwell says there is an 85 per cent chance that a house with a duroid-shingle or metal roof will survive a fire.

We’ve probably all read about the idea of a fire-safe zone of 10 metres (30 feet) around a house. Making this area fire-safe is your first step. Beyond that area and up to 100 metres beyond your house, focus on fuel removal.

Heat dissipates as it moves over 10 metres and is less likely to set your house alight. Do not have burnable vegetation up against your house. Replace grass that goes dry and brown in the summer with plants that don’t burn readily and surround these plants with rocks and gravel.

Blackwell warns that propane tanks are bombs. Get yours outside your fire-safe zone and bury a copper feeder line to deliver the fuel to your house. Don’t use your barbecue under the eaves of your house and keep a fire extinguisher handy.

Fire moves quickly up a slope, so we’ve placed an oscillating sprinkler directed at the slope that rises from the main road to the level of our house. On this slope, we will sacrifice one Douglas fir and remove lower branches from another to prevent radiant heat from rising into its crown and showering us with burning embers. If there were more trees, we would thin them.

Other advice: The debris in your gutters will catch fire. Clean it out. Mulch will burn.  So will chips and shavings. Ferns won’t burn. Salal and salmonberry will be resistant. Don’t have your wood pile near your house.

“I hate cedar hedges,” says Blackwell. “They are like gasoline. A spark sets them on fire.”

As for the more expensive remedies:

If you are retrofitting your house, choose a fire-resistant cladding such as metal or tin. Vinyl siding catches fire easily and burns so hot it can ignite  a nearby house. Use composite decking such as Trex that will not burn. Or put plywood sheathing under decks (although it was suggested that might eventually rot out a wood deck).

Install a sprinkler system on your roof. Because there is a chance the power will go out in a fire, the system would require a gas-powered pump running for six hours and drawing rainwater from a cistern holding 300 to 600 gallons. The idea would be to turn the sprinklers on before you evacuate.

So what did Paul and I do after Blackwell’s talk? We talked to our neighbour about a community cistern. We removed the propane tank from our barbecue and placed it outside the 10-metre zone in a spot clear of trees and debris. (Obviously, we don’t barbecue much.) In a few hours, we filled a half dozen large bags with forest-floor debris. We began to trim lower branches from our Douglas firs and hired a professional to trim what we can’t manage. We’ve started a green-waste pile and hope to take advantage of the island’s FireSmart program to dispose of a pickup-truck load, for which we qualify because we attended Blackwell’s talk. (Does anyone have a pickup truck we could make use of?)

Bowen’s FireSmart information is available on the municipality’s website. Jennifer McGowan is our emergency program co-ordinator. FireSmart is a pilot project funded by provincial grant money; a community can choose how to use the money.

Here are a few ideas from other municipalities:

Whistler offered a wood-chipping program for people who have trimmed trees.

Cortes Island has installed rainwater cisterns at their public school and fire hall.

As for us, we can talk to our neighbours and bring them to Blackwell’s next talk at the satellite firehall on Thursday, Sept. 27 at 7 p.m. Free green-waste disposal is offered to those who attend.

Blackwell’s final thought: “On this island everything is so continguous. It’s a bad thing if people don’t care about fire safety.”