From Vancouver, Arndt wasn’t supposed to go to Vietnam. He went anyway
Nov 8, 2020 7:30 AM By: Bronwyn Beairsto 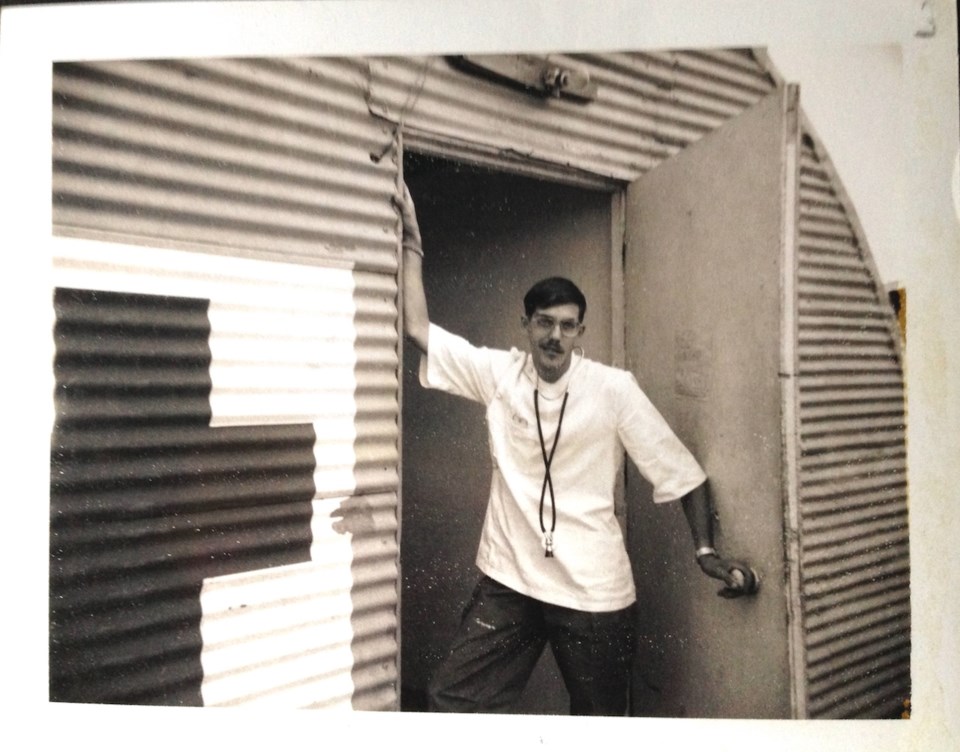 Roger Arndt in his ‘doc’ whites in Vietnam in 1969.Courtesy of Susan Hillman

“He went to war to prove he was a man, reality made the shit hit the fan.” -The Ballad of Don Rogelio.

Six feet separated each member of Mariachi Tobasko as they sidled up to Roger Arndt’s North Shore Hospice window. In the warm summer breeze, the four-piece group (one of two Mariachi groups to visit Arndt that week) serenaded their friend with his favourite songs. Though Arndt’s energy was waning, the islander sang along with the rising chorus of Volver Volver, laughing as he dropped an octave to harmonize with the last note.

In January 1968, the Vietnam War was reaching its height and watching it on TV, Arndt couldn’t help but feel he was watching history. Coming from an less than happy childhood in Vancouver, fascinated by the jungle warfare of the Second World War and looking for purpose, the 18-year-old Arndt headed across the border to the military recruiting centre in Bellingham.

Never mind that it was illegal for Canadians to serve the foreign war, the Americans were accepting anyone who walked through the door; all he needed was a visa.

“Was it adventure, escape or just wanting to prove something to myself – I don’t know. I just felt it was something I had to do,” Arndt wrote In My Year in The Company of Heroes, a compendium of stories from men of the 159th Medical Company, Dustoff, in Vietnam.

With eight weeks of basic training and eight weeks of combat medic training, the young Canuck headed from Texas to Germany and then to Phu Loi in 1969. In Vietnam, he was a medic with the 11th Combat Aviation Battalion, 128th Assault Helicopter Co.  and volunteered as a gunner with other companies.

Though the best buddy he had enlisted with was killed overseas––one of at least 134 Canadians who died or were declared missing in action in the war––Arndt returned and was honourably discharged in December, 1970.

“It was a bad time to come back from fighting in Vietnam in 1970,” said Arndt’s longtime partner Susan Hillman. “It was not popular. But those who were over there fighting, they were doing their best to win, be soldiers and not get killed themselves.”

“It was a very different thing from the people who were making the political decisions,” she said.

As an art student and later professor of visual art, Hillman had a very different take on the world from Arndt. “And I probably would never have gotten involved with anybody who was fighting in the war when I was a student,” she mused. “But that was all behind both of us by the time we met.”

Arndt met Hillman when he moved to the island in 1992. She was an associate dean at Emily Carr University, he was her banjo teacher.

By that time, Arndt had had a career with Brink’s––first on the trucks, later qualifying as a firearms instructor, and then becoming the Western area manager––before moving onto being a professional musician and teaching at Rufus Guitar Store. “He could play anything with strings on it,” said Hillman.

Both had children from previous marriages––Arndt had two girls, Kendra and Aleysha, and a boy, Wyatt. Hillman had a four-year-old boy, Victor.

In the early days of their relationship, Arndt was just going to stay at Hillman’s house for a couple of weeks and sort some things out. “Then we extended the two weeks and it became 28 years,” she said.

Music became central to their shared life. Hillman quickly switched from the banjo that had incited their romance to the bass and got more comfortable playing and performing with musicians. In 2005, the couple (along with Richard Baker of Blue Northern and Doug & The Slugs fame) recorded an American Roots album, The Texicanos: Southern Exposure, in the home studio Arndt assembled. Though Arndt had never recorded an album before, The Texicanos sold in 10 countries, was written up in French fanzines and was played by radio stations in the American South.

But it was when Arndt met Mariachi musicians that he found his great musical passion, became a co-founder of Mariachi Los Dorado’s in Vancouver and Don Rogelio was born. (Rogelio is Spanish for Roger.)

A friendship with Mariachi player Rich Ochoa (Ricardo) inspired the Ballad of Don Rogelio, the story of Arndt’s time overseas.

But that wasn’t the only story delving into Arndt’s wartime past.

Though Arndt was assigned to the 128th Assault Helicopter Co. in Vietnam, for a time he volunteered to fly with the 159th Medical Company (air ambulance). Looking to add a 159th patch to his flight jacket and wanting permission before doing so, Arndt found a website dedicated to the company and the contact information for one Randy Millican.

Unbeknownst to Arndt, there’d been some mystery around the Canadian. Some in Millican’s unit said there had been no Canadian, others said they remembered a “crazy Canuck.”

“[They] thought he was a ghost because nobody else knew about him,” Hillman recounted. It was quite the surprise when Arndt contacted them of his own accord. Millican and another war buddy of Arndt’s assured him that it was all right if he wore the 159th patch and asked their long-ago fellow to contribute a chapter to the book Millican was editing, In My Year in The Company of Heroes.

As Canada wasn’t officially part of the Vietnam War, the Royal Canadian Legion didn’t recognize Vietnam veterans as members until 1994.

“Canada says it was not their war,” wrote Arndt in the 159th’s book. “While this may be true, Vietnam was definitely this Canadian’s war.”

“It was a very important part of his life,” said Hillman.

Remembrance Day was very important to Arndt. “November the 11th, he always put his uniform on,” she said.

And on Bowen, Arndt was a staple at the massive Remembrance Day community ceremonies, marching in behind the bagpiper, though there was some controversy over carrying a flag. “He wouldn’t carry the British flag…he didn’t fight for Britain,” recalled Hillman. “They wouldn’t let him carry the American flag, which is what he fought for and when you’ve had your life on the line the flag is very important.”

Earlier this year, Arndt had been losing weight and generally was feeling unwell but had put it down to stress. The country was well into the grips of COVID-19 and virtual appointments had replaced in-person doctor’s visits. When he finally saw the doctor, Arndt was diagnosed with stage four kidney cancer. Six and a half weeks later, he was gone.

“He was a fabulous person,” said Hillman. “He was very straightforward and honest. He’d tell you exactly what he thought.

“But he was always very kind and wanted everybody to be happy.”

“Old soldiers never die, they soldier on. But he’ll be here forever in this song”  -The Ballad of Don Rogelio.