The outdoor production comes to Veteran's Park at the end of August
Jul 24, 2020 12:38 PM By: Bronwyn Beairsto 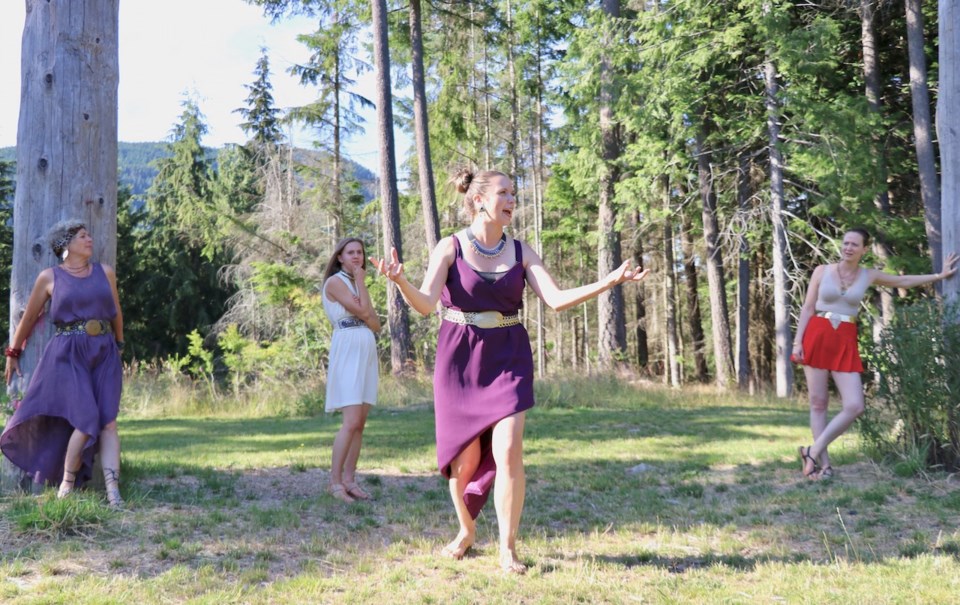 The giant poles in Veteran’s Park (installed for logger sports years ago) will set the stage for Theatre on the Isle’s upcoming production of Lysistrata.

Ancient Athenian playwright Aristophanes wrote the anti-war gut-buster in about 411 B.C.E. At that point, Athenians were 21 years into Peloponnesian War, having suffered not only the Plague of Athens from 430 to 426 B.C.E. but devastating defeat during the Sicilian Expedition in 415 to 413 B.C.E. “Everybody was really fed up with war,” explained director Bronwyn Churcher. “There was a lot of unrest in the city at the time.”

“[Aristophanes] was quite a political and social commentator,” explained Churcher. “So he wrote the play, sort of as a satire.”

“I think the zeitgeist at the time was like, this was ridiculous and we need to stop it…how is a really ridiculous way to stop it?”

The eponymous Lysistrata rallies the women of the warring cities to withhold sexual privileges from men until there’s peace, a treaty signed.

“That leads them to having this power that they never would have thought,” said Churcher.

While she acknowledges the play’s feminist significance, Churcher also noted that contemporary women’s power was limited and all the parts would’ve been played by men. “At the time, it was a huge joke that, ‘Haha, women are taking are taking power, this is ridiculous.’”

But rather like the Athenians of 411 B.C.E., people of today are facing upheaval. “I think a lot of people really are in need of relief through laughter and comedy and bringing people together through that,” said Churcher.

“It’s not the ideal time at all to do this but there’s ways of getting around that,” she said. “There’s ways of us finally sharing this joint experience.

“That is what theater is and what the power of theater can be.”

The rehearsals and the performances are and will be socially distanced for actors and audience alike. “It’s been tough at times because characters would need to get close to each other but we’re also playing on that a little bit––there’s  some jokes in there,” said Churcher.

But the play was also originally performed outside, in the amphitheatres of Ancient Greece. “It was so big scale that the characters didn’t really need to get close to each other,” she said.

Churcher, who grew up on Bowen and recently moved back, has been doing theatre since she began at Tir-na-nOg when she was 11 years old. This is her directorial debut. “It’s been really fun. I’ve had a lot of support,” she said. “And I think we’ve got the cream of the crop in terms of the Bowen actors involved in this.”

Amanda Szabo, Kat Stephens, Jackie Minns, Annabelle Coon, Doug Elliott, Frazer Elliott, Maggie MacDonald, Davin Killy, TOTI founder Martin Clarke, Heather Hodson, Silvaine Zimmerman, Aubin Van Berckel and Peter Frinton round out the cast. Judi Gedye and Maureen Sawasy are the stage managers and local artists are helping out with the stage and set design. Susanna Braund is helping with pronunciation. The backdrop will hang between the poles with the audience of no more than 35 per show placed with their ‘bubbles’ on the grass.

There are shows Aug. 28, 29, Sept. 4 and 5. The Saturdays have matinee performances as well as evening shows and if any of the shows are cancelled due to weather, it’ll be rescheduled to Sept. 6.

Tickets will be $20, sold online and will likely go on sale at the beginning of August. “We’re encouraging people to buy their tickets as soon as they go up because I think people really need this right now,” said Churcher. “That experience of sitting together and laughing at something that’s really, really ridiculous.

1
Bowen Islanders' new kids book chases away the monsters of childhood anxiety
2
Cameras in Snug Cove are for Netflix TV series
3
The last of Bowen's Christmas trees pass through the wood chipper for a good cause
4
LETTER: Please refrain from visiting new Cape park for now, B.I. Conservancy requests for sake of ecologically fragile areas
5
Bowen could be doing away with the island-wide pot selling prohibition