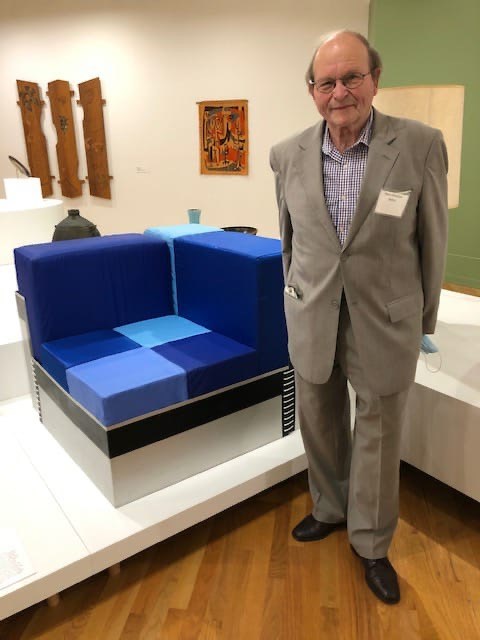 On July 18, the Vancouver Art Gallery (VAG) opened “Modern in the Making,” an important look back at the explosion of post-war creativity here in B.C. expressed in design and crafts between 1945 and 1975.

The war industry had developed basic materials like plywood, bent wood and aluminium for war plane construction, steel rod and angle iron, synthetics and plastic laminates. “Modern in the Making” takes the viewer from quickly emerging civilian market product design through to fusion with the Pop and Op Art of the ’70s.

Allan Collier, the collector of B.C.-originating design and production has acquired artifacts for about 50 years. About 75 per cent of the VAG’s show is loaned by him from his collection. After researching in the Vancouver Sun, Allan found a picture of my original “Vancouver Chair” in a 1969 issue of the Vancouver Sun and contacted me.

The Royal Ontario Museum (ROM) had invited for a nation-wide craft and design show. I sent my contribution: pollyfoam cushions in psychedelic fabric held together by plexiglass and corner lace. An invitation by the National Design Centre followed, for which I created a four-piece settee, shown later that year on Toronto.

I changed the containment frame to aluminium and chose just four solid colours for the upholstery. The powerful Eastern Canadian Furniture Industry ignored my design and Scandinavian Teak designs had become popular. And since I did not have the money to flood the market the “Vancouver Set” became and remained a “one of.”

We enjoyed it in our summer home and eventually the children discovered that the cushions made great building blocks and slides down the stairs. During hard times most were sold, but the aluminium frames remained.

Late in 2018 I got a phone call from a certain Allan Collier from Victoria who said that he had seen my ROM chair in a Vancouver Sun copy of summer 1969 and whether I still had samples. I said yes and could he come and see them, he was putting together an exhibit for the VAG. He came and invited me to participate with a chair and the table. The resurrection began with help from Christian and Dave of BowenIslandUpholstery. Tara Fraser of the VAG gave the final finish. Now, 51 years later, the “Vancouver Chair and Table” gleam as if they were born yesterday.

“Modern in the Making” is one of the most effective and visitor friendly exhibits I have ever seen and reflects the postwar ingenuity that blossomed in B.C.