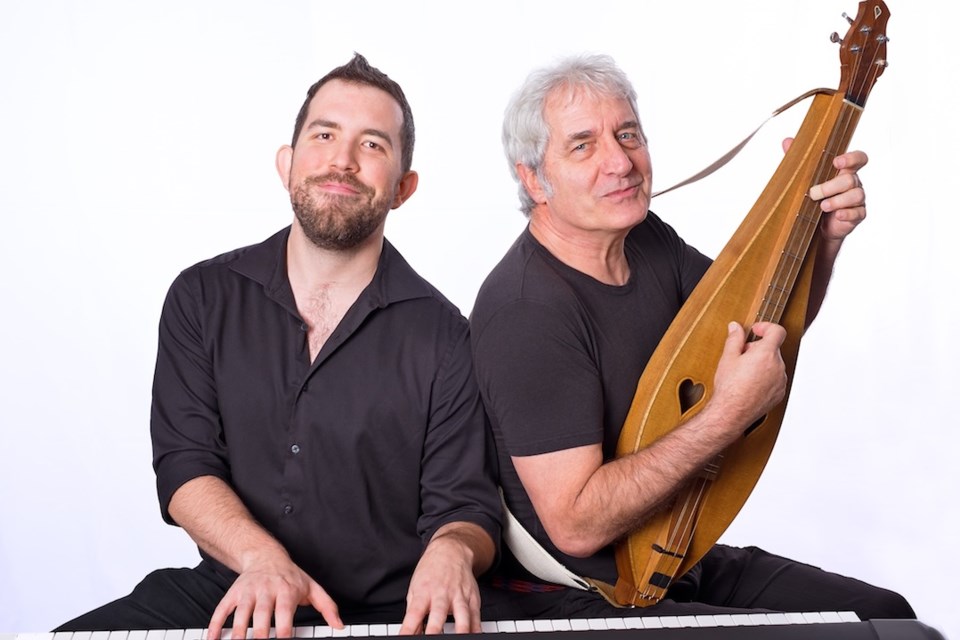 Nico Rhodes is now on tour with his childhood hero, Rick Scott.

On Friday, February 16th, at 7:30 pm, the “Trust Me” series presents Rick Scott & Nico Rhodes in their new project “Roots and Grooves.”

Not long after I came to Canada in 1972, I met one of the most unique songwriters and musicians I have ever encountered before or since. He played his teardrop shaped dulcimer like a guitar with a charismatic rhythmic and lyrical passion, and wrote and delivered songs like nothing I’d ever heard. When we formed the now legendary Pied Pumkin, along with guitarist Joe Mock, their imprint on BC music and my life as a musician was forged forever.

What he didn’t see coming, was that the little boy who penned a fan letter to Rick at 8 years old, would at 23 orchestrate Rick’s music for symphony and record and tour with Rick as a duo. Equally proficient on keyboards and woodwinds, Nico Rhodes is in constant demand as an arranger and musical director for stage shows from Chemainus to Ontario, when not playing jazz with his own trio or touring with renowned chanteuse Joelle Rabu.

Nico says: “The playlist of my youth was Beethoven, Piaf, Oscar Peterson and Rick Scott. I grew up on his music. Fast forward 20 years and I’m privileged to share the stage with my childhood hero who happens to ooze groove. He’s steeped in old swampy music and I like to think we shake each other up and that the audience gets to come along for the good times.”

Rick says, “Nico Rhodes is on fire -- bursting at the seams with music! Not since Robbie King, not since Pied Pumkin have I felt such unfettered originality. Nico reinvents and reinvigorates everything he plays.”

So needless to say, when they asked if I would present their show on Bowen Island, it was an easy yes! As the series title suggests, you can trust that this evening of music will transport you for the two hours you join Bowen Islanders at Tir-na-nog Theatre. A  Gabriola Islander recently testified that their performance there was “The best show I have seen in decades.”

You can purchase the $20 tickets at Phoenix on Bowen, and online at rickscott.bpt.me. And you can find lots of audience testimonials and videos on Rick’s website rickscott.ca/roots-grooves

Bowen bands together to help out beloved local musician with cancer
Apr 8, 2021 12:19 PM