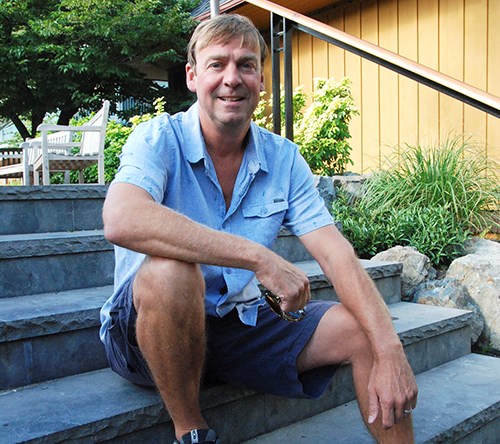 Andy Rainsley of Bowenshire Stoneworks and Landscaping was given simple instructions when asked to design and build the staircase at Village Square: Make it look and feel good. Bowenshire recently won Small Business of the Year in the West Vancouver Chamber of Commerce Excellence Awards.Martha Perkins

Where some people see only the challenges of turning rocks and cliffs and forests into liveable spaces, Andy Rainsley sees exciting possibilities.

“I can picture it all in my mind,” the owner of Bowenshire Stoneworks and Landscaping says of his ability to create beautiful and yet practical solutions for any of the obstacles the landscape throws at him. “People will look at me bewildered and say, ‘How will you do it?’, but I can close my eyes and visualize it.”

It’s partly years of experience — it used to drive his mother nuts when he built ponds in her backyard garden in Coventry, England — but also the part of the job he thrives on.

“We get to be really creative,” he says of why he loves his work. “Every job is completely different. We’re working on a waterfront property one day and in the forest the next. It’s never the same. The job is always changing.”

The West Vancouver Chamber of Commerce recently recognized this dedication to craftsmanship by naming Bowenshire the Best Small Business of the Year in its 2015 Business Excellence Awards. (Rainsley was so surprised by the nomination that he had to borrow a suit for the banquet; he was so surprised by the win that he didn’t have a speech prepared.)

Considering how many well-established businesses he was up against for such an honour, it’s a remarkable achievement for someone who started his business with “a truck and a lot of hard work” 13 years ago. Rainsley owns the business with his wife Diana Ray and they currently employ 12 people because they have so many projects on the go.

One job they just finished was in Hood Point west. The owner had a rough idea of what he wanted and asked if Bowenshire could make it happen. Rainsley closed his eyes and…. The result is like a personal resort right on the ocean, with features such as a gorgeous outdoor kitchen.

He also worked on an adventurous project on Cape Roger Curtis. He started it as a subcontractor for Wakefield Construction but when Wakefield went bankrupt (owing Bowen Island suppliers a reported total of $400,000), the owner asked Bowenshire to continue working on the project. “That was just a delight,” Rainsley says with his trademark good humour.

He wouldn’t be surprised if either of these houses land in the centre of a magazine spread.

“You’ve got to take pride in what you do,” he says. “If you don’t care, the results won’t be favourable. We’re a little boutique company and all the staff is very conscientious and wants the best results.”

He certainly got a favourable rating when he designed new stone stairs at Village Square. The former stairs were awkward to traverse because they didn’t conform to a normal footfall. “The specs of the job were  ‘Make it look good and feel good.’”

He couldn’t change the space restrictions but he was able to use landings to create a natural rise and fall.

Although the business is growing and he has projects off the island, there’s no other place he’d rather be than on Bowen Island. He thrives on the strong sense of community, which includes his business relationship with First Credit Union. “It’s fantastic,” he says. “I used to bank with HSBC and was just a number; I was always rushing for the ferry. With First Credit Union it’s like going back 50 years; you can just phone them up and ask them to do something for you. They’re a breath of fresh air in the banking world.”