Cozy and convenient in the Cove

There’s a new kid in town when it comes to both an all-in-one convenience store and cafe, and while not the biggest kid on island, it’s a heartily stocked one.
May 1, 2014 2:51 PM By: Bowen Island Undercurrent 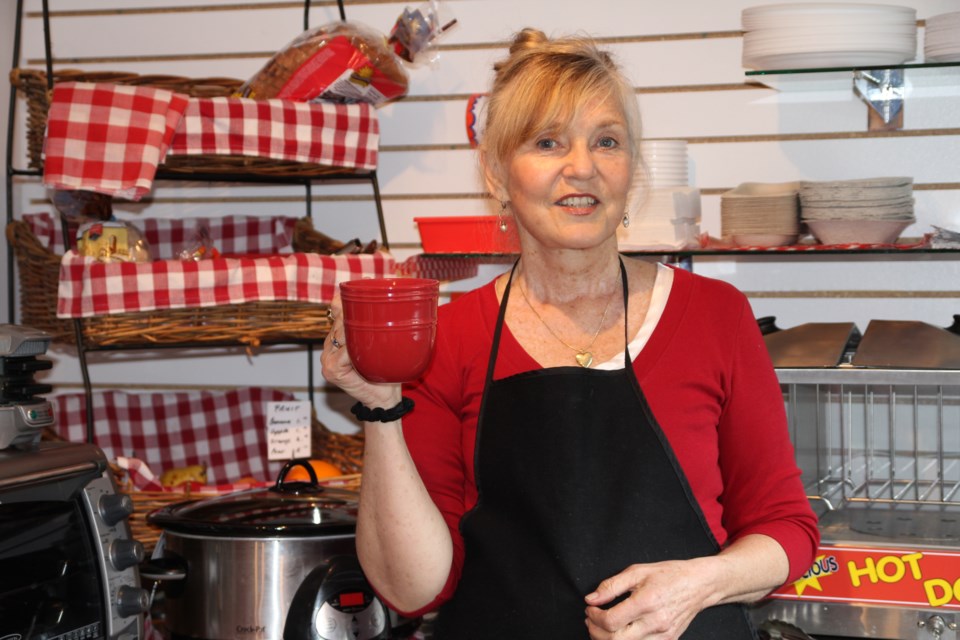 Lynn Watson enjoys her morning coffee in the tiny yet well stocked Small Mart. Watson says she is currently trying to figure out which hours best suit her customers, so please bare with her until they are solidified!Meribeth Deen

There’s a new kid in town when it comes to both an all-in-one convenience store and cafe, and while not the biggest kid on island, it’s a heartily stocked one.  We’re talking about the cozy Small Mart that opened earlier this month in the space underneath the pub.
It’s the work of long-time islander and real-estate agent, Lyn Watson, and is chock full of food items to buy and take away, or buy and sit with.  Lyn recently found herself retired and with more time on her hands than she cared for.
She actually made that discovery, that retirement wasn’t for her, just one week into her retirement and the Small Mart is the result.  “I really wasn’t ready for retirement,” she said.  “I guess it’s as simple as that.”
Watson is no stranger to operating a business on Bowen.  When she arrived on island 20 years ago she and members of her family bought a cafe in Snug Cove known as the ‘Whirling Dervish’, or ‘the Derv’.  One of their first decisions was to change the name - to the Snug Cafe.  Eventually they sold and, for a time, before focusing on real-estate, Watson ran a clothing store called The Summer House.
She worked like a convenience store/cafe owner Trojan getting The Small Mart underway and then took two days off.  That might be the only days The Small Mart is ever closed as now she’s open 7 days a week.  The plan is to hire a two-day a week worker but for now she’s barrelling through on her own, daily from 6 a.m. until 4 p.m. The hours are subject to change as she learns what her customers prefer.
Her customers are a variety of people, including kids, ferry commuters, moms and island workers, and business has been good, and is getting better.  It’s a labour of love and Watson is enjoying hosting whoever comes through the door.
And don’t be fooled by the notion of ‘small’ because there is room for a few at a time to sit and have a hot dog ($1.69 for a small one, $2.69 for a large) a bowl of soup ($3.25) or a range of other food items.  The food and the atmosphere are already drawing rave reviews.
“How wonderful that we live on a small island and yet have such diversity of choice,” customer Jane Miller enthused during a recent Small Mart visit.  “This place is wonderful and we are blessed.”
Given that the owner has proven herself to be less than adept at retiring, expect The Small Mart to keep being wonderful for a very long time.