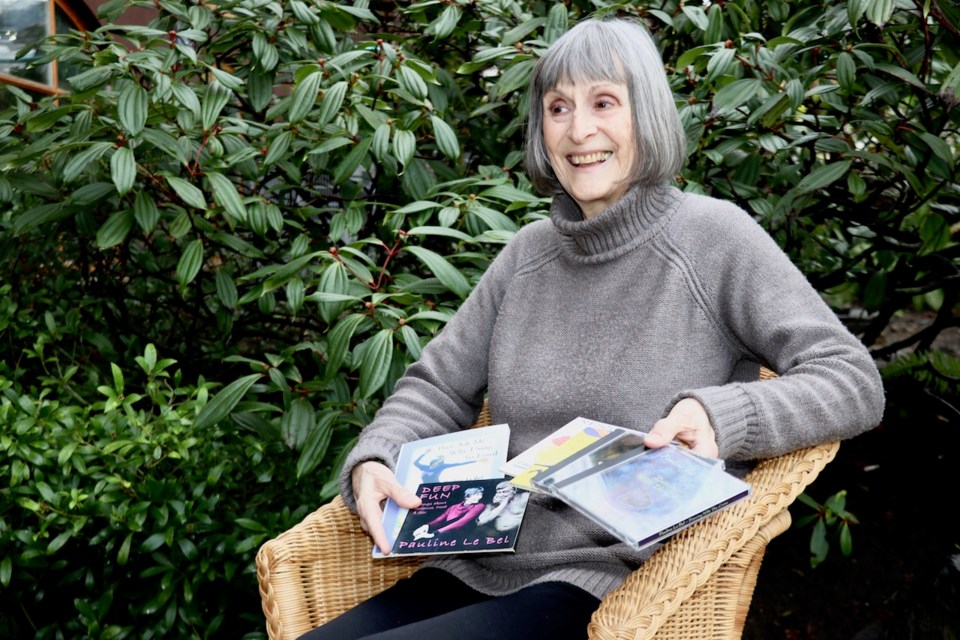 At 76, Pauline Le Bel is starting a new business.

Looking to mark a significant birthday, anniversary or acknowledge someone you love? You can now hire Pauline to write you a song.

While the impetus to start Write Me A Song Pauline! was her longtime partner moving out due to health reasons and therefore she needed some income, Pauline’s songwriting pen has never been far from her hand.

“I got this idea to do what I’ve already always done,” says Pauline, who has released five CDs of original songs since 2000.

Last summer, when friends of Pauline’s celebrated their 50th wedding anniversary, she wrote a song to sing at their celebrations.

Before Pauline dove into the writing, she interviewed the couple.

“It was really fun to do,” she says. “I take the notes and then I go home and I get my highlighter––like she said that, he said that––and the song starts to come to me.”

“He made her laugh, she made him think, little did they know they were on the brink of love that would blossom and grow…”

“I love it because I get to know more,” says Pauline. “I’m a curious person so I get to find out this interesting stuff about people and then come down to what is the essence and what they want to celebrate and then write a song about it.”

While this is a new chapter for Pauline, it also comes with making peace that she’s no longer––as she describes it––the “Energizer bunny.”

Following the publication of her 2017 book, Whale in the Door, and the surrounding commitments of touring, Pauline was left burnt out and she has had some health issues over the past couple of years. But her recent living situation change has reinvigorated her creativity.

“So I start every morning.. I sit down and write a poem about old age,” says Pauline.

“I’m calling it ‘Let me tell you something about old age’ And some of them are really funny…some of them are not funny and they’re just facing…lack of future. What that means to a person.

“Or less future I guess.”

But it’s the future Pauline’s preparing for. She had considered moving off-island but after a bout of bronchitis over the holidays and a constant stream of soup from friends, she realized that her community is here and resolved to stay.

With a few customers already lined up, Pauline bounces in her chair as she discusses her projects––rather like the Energizer bunny.

Correction: Pauline Le Bel has in fact released five CDs of original songs since 2000, not 1973 as was written in the print edition of this story.