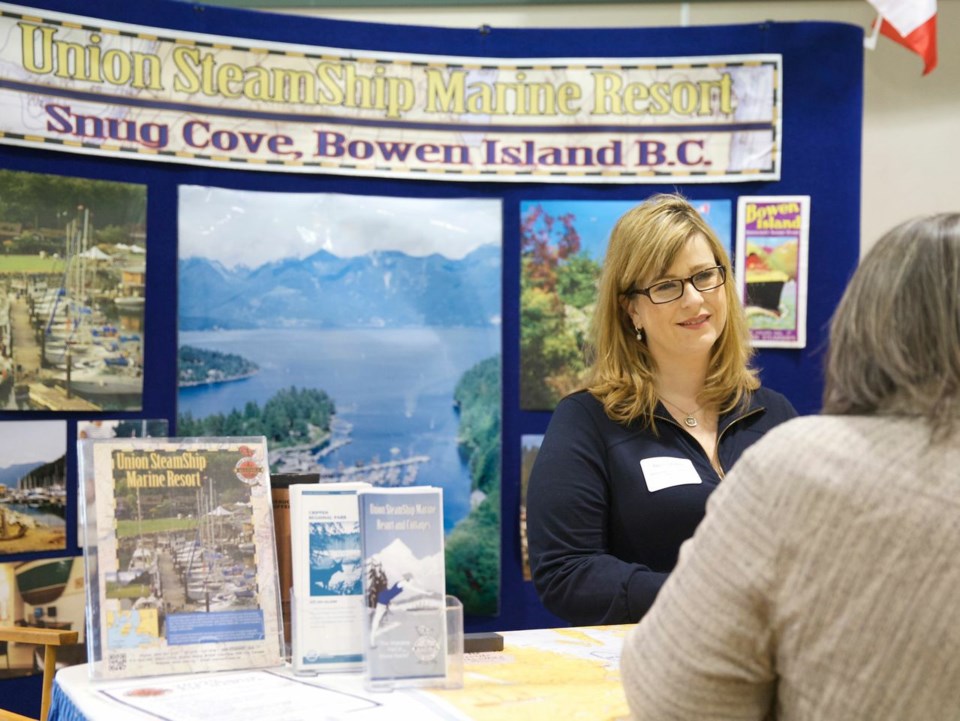 On Saturday morning, West Vancouver and Bowen-based businesses set-up displays in the Bowen Island Community School gym in order to promote themselves at the first-ever Bowen Island Business Showcase. The event was organized by the West Vancouver Chamber of Commerce, with the assistance of Bowen Island’s First Credit Union. The Executive Director of the West Vancouver Chamber of Commerce, Leagh Gabriel, estimates that 50 members of the public stopped by to check it out and noted that most people don’t want to spend a sunny Saturday in a school gym. However, based on the fact that they managed to sell all the table-spaces available for businesses, the Chamber will likely go ahead and organize the event again next year.
“The West Vancouver Chamber of Commerce is interested in just about any opportunity that can offer exposure, and that was the purpose of this event,” says Gabriel. “It allows businesses to let local residents know they are there, which is good for everyone. If one person came through who has an ailing parent or relative, and now knows about what’s offered by Amica or Westerleigh retirement homes, then that is a good thing.”
Gabriel says that one of the things she was surprised by was the lack of Bed & Breakfast owners who set up at the event.
“I’ve always thought that B&B’s are one of Bowen’s biggest assets, as we have a real lack of accommodation options in West Vancouver,” says Gabriel. “I didn’t meet any accommodations owners on Saturday.”
Carol Petersen, owner of Nature Encounters in Snug Cove, did attend the business showcase but was not solely focused on the promotion of her guest suite.
“Because I am a person with pets, I cater to other people with pets specifically – dogs, cats, squirrels...” says Petersen. “But living on Bowen many people find they have to do multiple jobs in order to pay the bills...For me, it means renting out a guest suite, photography, selling travel tours, and leading safari tours in Africa.”
Petersen says that as someone who has spent a lot of time at trade shows, she was impressed by how well this one was organized.
“We were all up against a funny day on Bowen, with so much sunshine,” says Petersen. “But personally I’m not disappointed in the numbers, it takes three years for a trade show to get established. I didn’t go to the Outdoor Adventure & Travel Show in its early days, but now I wouldn’t miss it. This year I’m even going to speak there.”
To further promote her guest suite as well as accommodations on Bowen more generally, Petersen says she is working on organizing a B&B tour aimed at a West Vancouver audience in April.
For Vaune Kolber, a realtor who has been living on Bowen since last July, the Business showcase was a great opportunity to build connections with other businesses.
“I got to meet contractors and builders and landscapers who I wouldn’t have known otherwise, and as a realtor, I feel I can offer my clients who are new to the island a more complete package if I have these kinds of connections,” says Kolber. “It would be great to see more members of the public out, but I think that maybe if the businesses got together to think up some creative sort of offering, that might help.”
For Tourism Bowen Island Chair Murray Atherton, the event was anything but a disappointment.
“I found it to be really fun, actually,” says Atherton. “I had the opportunity to introduce one of my neighbours to three other immediate neighbours. And I think, considering a lot of people didn’t know what this event was about and it was the first time for it, we can consider it to be a good success.”