Norma celebrates another year on The Pier

Norma Dallas has an extensive archive of photos of Snug Cove and the Bowen Island Marina as they have developed over the years, but her memories of the place are even richer.
Jul 5, 2017 3:05 PM By: Bowen Island Undercurrent 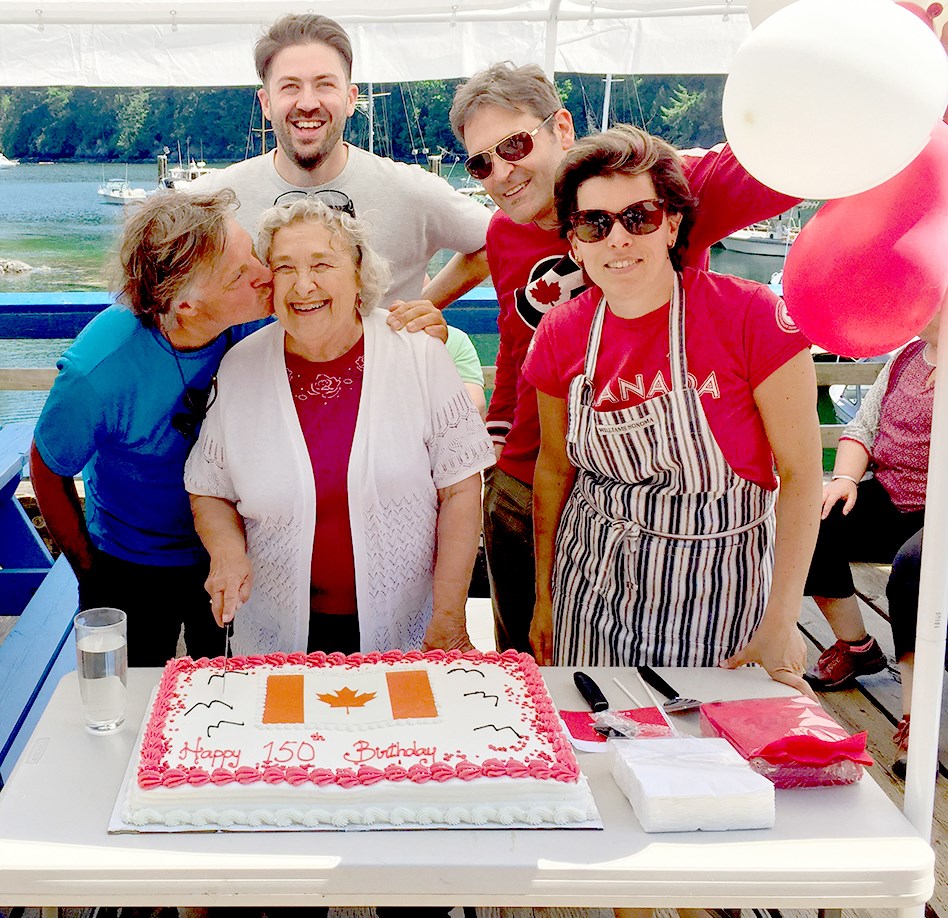 Bowen Island Sea Kayaking’s Brent O’Malley offers Norma Dallas a peck on the cheek as she cuts this year’s Canada Day cake. Behind Norma stands Brent Freedman of Branch & Butter and Chris and Stanka Obin of the Lime and Moon Pie Co. to her right.ANTHONY DALLAS

Norma Dallas has an extensive archive of photos of Snug Cove and the Bowen Island Marina as they have developed over the years, but her memories of the place are even richer. Her connection to Bowen is such that, when the Bowen Island Marina, which was undeveloped back then, came up for sale in 1985, there was no question in her mind that she would love to run it. The purchase of the Marina took her family from being long-time summer residents, to permanent residents of Bowen Island.

From the deck of her home overlooking The Pier, she recently delved into her personal history with the place.

“When my Dad was a little boy, as far back as 1913, he would row over to Bowen and camp at Cape Roger Curtis with his uncle,” says Norma. “And then, when I was a kid we would boat over and he would moor right over there in Snug Cove, it was so different then - with just a little dock and no ferry bumpers. I would run up the hill to the restaurant, which was where we are now, and buy ice cream.”

Until the 1950s, she says, “this place was booming.” The construction of the upper levels highway and the creation of so many more recreational opportunities for people in Vancouver changed that, leading to the closure of the hotel and subdivision of Union Steamship properties in 1956. For Norma, though, Bowen remained home away from home.

“I was about 19 and staying with my Aunt Lena in her cabin at the top of Seven Hills. She said she was going to a party and I should come, so I said yes and ended up carrying a case of beer all the way down the dirt road to a cabin over by Dorman Point,” she says. “We got to this little cabin where Rolf Harris was playing, the place was completely packed. There was this guy sitting down who invited me to sit beside him, well that was Dennis, and he became my husband.”

Dennis owned property at the end of Taylor way that would become the family’s Bowen-base, and when it came time to build the marina (which was delayed, in part because of the death of a son) they used trees selectively logged from the property, and milled locally, to build the whole thing.

“All the labour was local too, except for one person, who was a friend of my son’s. As soon as it was done, Brian Biddlecomb said, this is a perfect place for a dance! So we held the first Dock Dance in 92’ and Minnow Davies held his annual fishing derby before the decking on the pier was even finished,” she says. “My priority was an ice-cream shop. I called it the Sugar Shack.”

“The more people came, the more they enjoyed it,” she says. “Which is what I’ve always wanted - for people to love this place as much as I do.”

At some point, she says she brought down a big bucket of toys from the Knick Knack Nook, mainly to distract small children from the edge of The Pier and the ramp down to the dock, but also to create a space where parents could relax.

The past few summers, says Norma, business has been really good and while this summer got off to a slow start because of the weather, she’s not concerned.

“Summer always comes, and when it does, the business comes,” she says. “I would love to get some buskers down here more regularly, to make it even more lively - like it used to be when we had water-slides and live performances at Sandy Beach. There used to be so much going on here all the time, we had so much fun.”

Norma Dallas is ready to move on, and take a break herself, which is why she’s put the Marina up for sale.

“I’ve always wanted this place to give a feel for the old Bowen, and for people who come here to take an interest in the community’s heritage,” she says. “I hope to sell it to someone local, someone who also wants to holds a belief in community, and keeps The Pier as a place with really good vibes.”

She adds that she plans to move back to her roots in Kitsilano.

“I look forward to becoming a tourist on Bowen myself,” says Norma. “Having coffee at the Snug Café and just relaxing.”