After months of negotiation, the conservancy acquires three waterfront lots for a park at a cost of $8.8 million
Oct 22, 2020 7:30 AM By: Bronwyn Beairsto 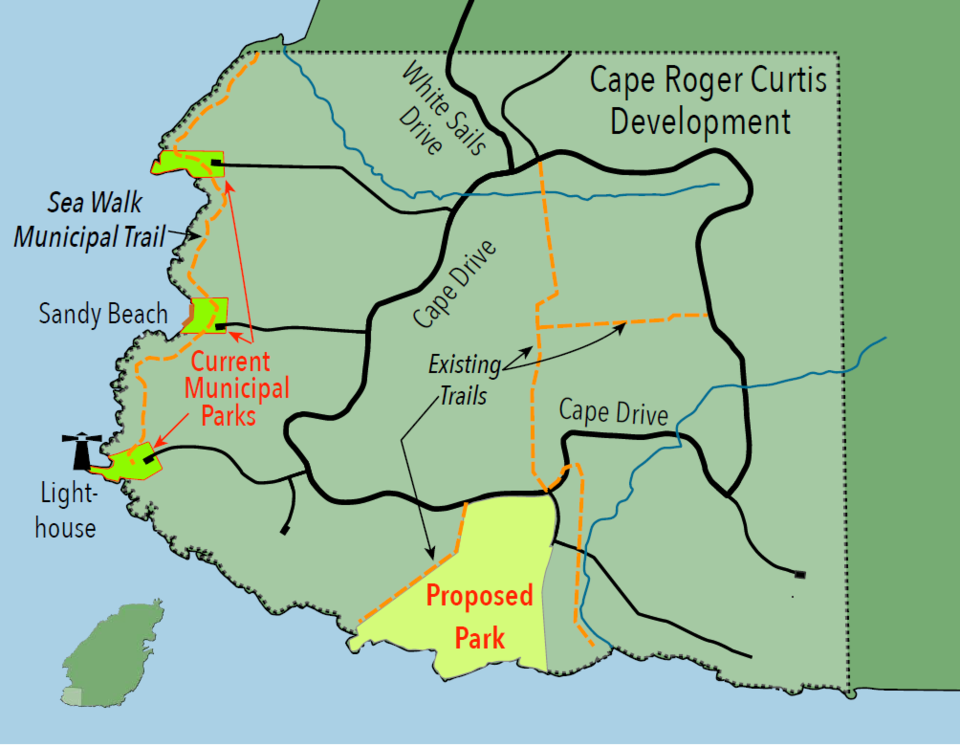 This map shows the new park-to-be on the south face of Cape Roger Curtis. The land isn't open to the public until Dec. 16.Bowen Island Conservancy

It’s a lesson in community perseverance: a generous donor, an idea, and a lot of community spirit.

Bowen Island Conservancy signed an agreement to purchase three waterfront lots on the south-facing side of Cape Roger Curtis last week. The 32 acres are to become a park for public use and conservation. The sale closes Dec. 16.

“We're all extremely happy that we've reached agreement that we're able to make this park a legacy for the residents and visitors to the island,” said conservancy president Owen Plowman. The conservancy is a non-profit, registered charity dedicated to protecting and preserving the island’s natural resources.

When news broke publicly this past February that an anonymous donor family was willing to fund the purchase of lots 20, 21 and 22 of the Cape (there were 35 unsold lots at the time), it seemed that the proposal was at a standstill. The developer had recently removed the parcels from market as they were to be part of a rezoning master plan. The conservancy said it was still planning to put together an offer for the shareholders but Cape on Bowen CEO Candy Ho said that her organization was looking at more ecologically significant land further east to conserve.

But Ho says, when it became apparent the conservancy wanted to not only conserve land but open it up for public use, she decided the matter needed revisiting. She also saw the hundreds of comments of disappointment on Facebook that the sale wouldn’t go ahead. “It became really clear I should reopen the conversation with the shareholders.”

“My intention for a plan is integrating all of the desires and priorities and needs of the island, which includes public waterfront park with public access,” she said.

In March, the conservancy and Cape on Bowen let the community know negotiations were proceeding but had otherwise been quiet.

Of course there was COVID and due diligence to deal with, slowing the process, but the conservancy presented its first offer in July said Ho.

At one point negotiations were nearly dead in the water said Ho but last week, the two parties agreed on the median between the original offer and the original counter––$8.8 million.

“I think it's a meeting in the middle, if both parties really want to deliver the public park, I think it really does take some compromise on both sides to deliver the legacy,” said Ho.

“It's exciting for the Conservancy, because it's our first land acquisition as well,” said Plowman. “And it happens to be a major amenity for the island.”

“We’ve not only accomplished something that we've planned for several years in acquiring land that we can use for conservation purposes and yet let people enjoy but it's also a fantastic piece of land right on the water.

“It's 32 acres that people really love.”

The conservancy has a lot of work ahead. It needs to complete an environmental assessment and put a management plan in place. “I know right now that there are a couple of places where we have to be careful because there are very rare species… quote unquote blue-listed species of vegetation,” said Plowman.

“We've got to figure out how can we let people have access but how can we also be careful about where they tread,” he said. “So it may mean that we put a viewing platform in place here and there.”

Signage, benches, parking, platforms will all need to be addressed in the management plan.

The potential for lot 23

The conservancy had hoped to also buy lot 23, just east of lot 22, to fill out the block between the last house and Huszar Creek but that lot is part of Ho’s rezoning master plan, which had already been redesigned to exclude the three previously discussed lots. As lots 20 to 22 are relatively flat lands, they had played a significant role in the rezoning plan.

“And so we really began to redo the entire plan, all of the engineering assumptions were different in terms of community water system connection, pressure zones and road design.

When the conservancy asked about lot 23, the new draft plan had just come ready and Ho had begun reaching out to interested parties. There’s still the potential, should moving the currently planned uses of lot 23 prove viable and the community be interested, for the conservancy to acquire 23, said Ho.

Ho also noted that there’s been some concern from residents of Whitesails about increased traffic in light of the new park and that that is a consideration in the new master plan designs.

When the news of the purchase reached Facebook, it was met with many dozens of gleeful comments and hundreds of likes.

“I'm really, really grateful for this outcome. And I'm really grateful to Owen,” said Ho. “This was a very contentious relationship in the past and…we've come to a midpoint. And I think that's a huge, huge win for everybody.

“And I'm thankful that the shareholders weren't trying to get the highest dollar," she said.

Plowman also noted that the conservancy hopes not to stop with this Cape purchase. “We are very keen to find other ecologically significant parcels of land to acquire,” he said. “If somebody else thinks that they have an interesting piece of land, which has an ecological significance, then we would be interested in talking to them.”