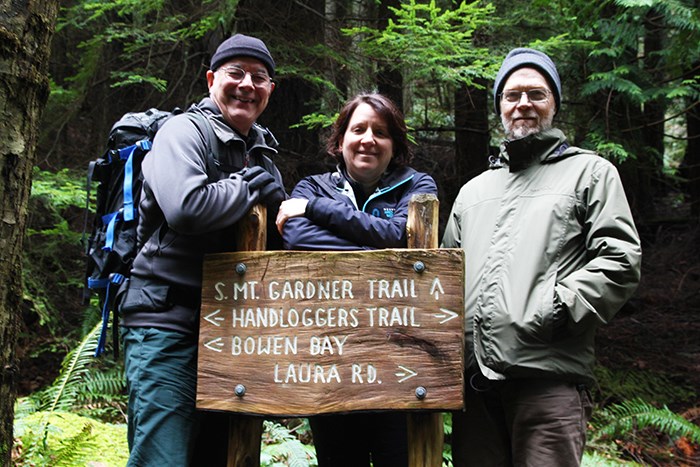 When Bowen Island’s Rotary Club asked for ideas on making Bowen a better place, the suggestion made by a BICS student named Sophie Walters struck a chord:
The Outside45 class went on a hike on Mount Gardner it was a wonderful hike but so many times we got LOST. When there was a lookout point there were 3-5 different trails to go on and some times there were even some trails that lead you all the way to the bottom of the hike! My idea is to improve the signage and improve trails.

The idea, says Rotarian Eva Churcher, was appealing for its broad impact, but its importance was also highlighted by an RCMP report about a 12 year old girl getting lost on the mountain. Rotarian Robert Ballantyne, an avid hiker and back-country skier, took it upon himself to figure out the best way to follow through on Sophie’s suggestion.

In researching the problem, Ballantyne discovered that the maps of Gardner available through popular hiking guidebooks and websites were both inaccurate and inadequate. He also found that the experience of hiking Gardner was proving to be a frustrating one for visitors to Bowen.

“A man and his girlfriend filmed their entire journey from Vancouver up to the top of Mount Gardner and back onto the ferry again, and put it on Youtube,” says Ballantyne, noting that the video was instructive to him in his research.“They get off the ferry feeling enthusiastic and finding the Cove quaint and beautiful, but they get so frustrated going up the mountain, feeling like they’re going in circles and utterly disoriented, that by the end they say they’ll never attempt the hike again. All of us who hike Gardner appreciate the rugged feel, but I think we can keep that while offering people a better experience.”

Mike Hanafin, a hiking columnist with the Vancouver Courier says frustration is a common sentiment among hikers who head to Bowen to venture up Mount Gardner.

“People tell me they end up having to backtrack because the maps are inaccurate and there are multiple junctions where the signage isn’t super clear,” he says. “The first time I hiked it I was very confused. The second time I was very careful and had closely studied various maps so made it to the top no-problem. The third time I tried to create a map so that others wouldn’t get lost, but I’d love to see a really good, accurate hiking map of Mount Gardner be made available to people.

Ballantyne says that signage is not the problem on Mount Gardner’s trails, but rather, the fact that it is very easy to get off-trail.

“We need to define the trails that people should be hiking, and to make sure that those are very well marked. When you are hiking on an official trail, you should be able to see a little red diamond behind you and one ahead of you at any point, so that you know you haven’t veered off onto a deer trail or an old road that’s going nowhere.”

Another issue facing the trails on Mount Gardner is windfall caused by winter storms. While North Shore Hikers has, in the past, sent teams out to perform maintenance and light trail clearing over the years, the work has not necessarily been as consistent or as thorough as is required at times. Islander Chuck Venhuizen says that he encountered so much debris on the trails one particular hike last spring that it took him twice as long as usual to reach Gardner’s summit.

This experience motivated Venhuizen to find a method to solve the problem, and his research led him to Recreation Sites and Trails BC (RSTBC). One of the forestry officers with RSTBC arranged for a crew of five forest fire fighters to come to Bowen last June to clear the large debris from Gardner’s trails. Venhuizen and Ballantyne acted as their guides for two days.

Venhuizen says that his experience hiking elsewhere has led him to believe that Bowen can do a much better job on the upkeep of trails on Mount Gardner.

“We can upgrade them so they would be enjoyed by a far greater number of people,” says Venhuizen. “I’ve been to places, like Widby Island in Washington State, that have first class trail systems and it would be entirely possible to take the best practices implemented by such systems and put them in place here.”

In June,Venhuizen made a presentation to Rotary about a possible first step in such a process: signing a partnership agreement with RSTBC.

Seven months following that initial presentation, and numerous hikes up the mountain taking detailed notes and GPS co-ordinates, Ballantyne and the President-elect of Bowen Island Rotary, Denis Lynn, pitched the idea to Council.

Lynn told Council that in signing the agreement, Bowen Island Municipality would be taking official responsibility for the trails, but Rotary would be the Municipality’s delegated agent in the task and take-on the job of making sure the trails were taken care of.

“Bowen Island Rotary wants to work on engaging people on-island who care about the trails in actively maintaining them,” says Ballantyne. “What the Municipality will take-on by signing the agreement is a measure of liability.”

In return for signing the agreement, RSTBC would work to have Gardner’s trails officially recognized under Section 56 of the Provincial Forestry Act.

This recognition would make hiking the primary purpose of the Crown Land on Mount Gardner, and while this would not offer 100 percent protection to the lands, it would mean that the signees would be made aware of any plans for development and have a say in such plans.

Ballantyne told Council that the map he has created along with the help of fellow Rotarians, show more than 20 kilometers of “good” hiking trails on Gardner. Making those maps accessible and maintaining the trails could go a long way to improving the experience people have on the mountain.

“I’ve discovered that most tourists who come to Bowen take the most boring route to the top,” Ballantyne told Council. “I envision people discovering far more interesting routes, and having a far more compelling experience that will bring them and their business back to Bowen over and over again.”

“Maintaining those trails is too big a job for one person, or even one group of people. Based on the work done by the fire crew that came here, I would say that we are likely to get some essential support that will make a big difference,” says Milward. “And the people who hike up Gardner need to understand that this is wilderness. The mountain isn’t as big or bad as the North Shore mountains, which frankly, are man-eating, but there is still plenty of opportunity to get severely lost up there and we are lucky that no one has landed into real trouble.”

Council responded to Rotary’s presentation about the work they’ve done on Mount Gardner enthusiastically, noting the potential to enhance the island and tourist experiences here through improving the trail system. However, they suggested the Municipality talk to its insurers about the wisdom of taking on the legal responsibility for Mount Gardner’s trails.