Case of a missing tip jar has heartwarming conclusion 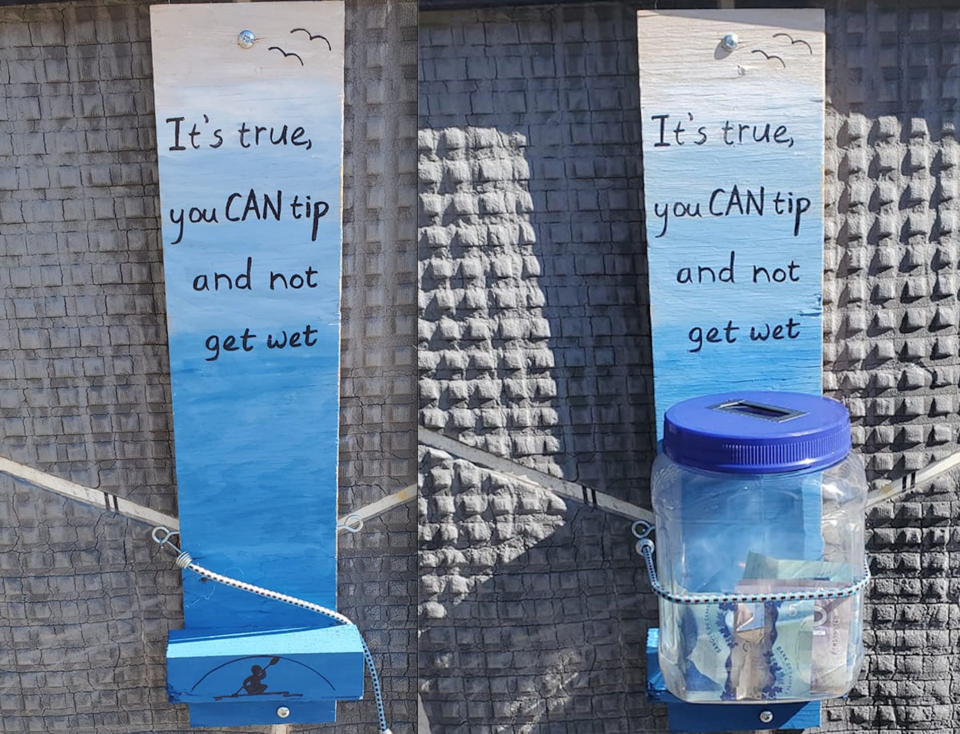 Bowen Island Sea Kayaking's tip jar was thought stolen April 20, but a thoughtful bystander had retrieved the jar, mistakenly left out overnight, and left it for safekeeping at a nearby business. The jar backing's design and tag line are by Carmen McKay.Photos courtesy of Brent O'Malley

“I figured – you know, there’s probably a pretty good chance it’s still going to be where I left it,” said O’Malley. “And I didn’t feel like getting back in my car and coming down to the shop.”

Come morning, the tip jar was gone. Not just the money, the entire jar.

“To whomever took our tip jar last night (that we forgot to put inside) I expected more from Bowen Islanders,” wrote a dejected O’Malley on the Bowen Island Everything Else Facebook group Tuesday morning.

But he spoke too soon.

“I was open for a couple hours and when Branch opened up and the woman working today walked over with the tip jar and the money in it,” said O’Malley. A woman had been sitting on the pier with her kids the night before and saw the tip jar. Thinking that it probably wasn't meant to be out, the woman gave the tip jar to the nearby eatery to hold onto.

"Bowen is as awesome as I have come to expect," O'Malley amended his Facebook post to read.

O’Malley said he felt “awesome” that it was returned but also laughingly admitted he regretted making the BIEE post.

“I immediately jumped to conclusions – thinking the worst about people,” said O’Malley. “I wish I had waited just a little bit and maybe just asked around first before posting anything.

“Somebody was just looking out for it,” said O’Malley. “So that was really nice."

“I said to my lead guide, ‘Well if nothing else, at least we got the word out on the island that we accept tips!’” O’Malley laughed.