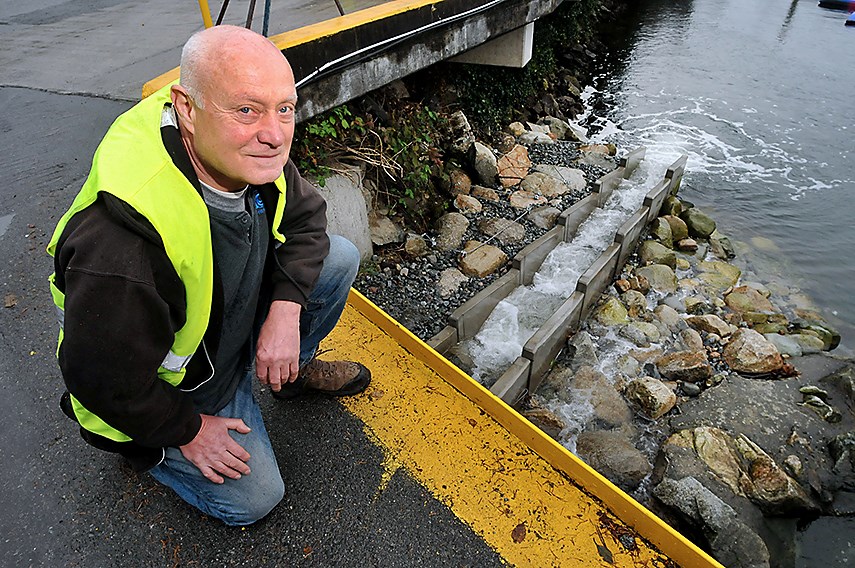 If you build it, they will come.

West Vancouver’s Nelson Creek is again home to spawning salmon after years of decline, thanks to a new fish ladder built by the West Vancouver Streamkeepers Society.

Like most creeks on the North Shore, Nelson would once have been teeming with returning chum this time of year but development along the shoreline has made it almost impossible for them to successfully return and spawn.

“It used to have a fairly good run of chum salmon and coho and it's steadily declined over the years," said John Barker, past president of the society. "The difficulty is getting fish from the ocean up into the creek. It's quite a difficult passage for them. ... I think we were down to just a handful of fish each year really coming in.”

The Streamkeepers havdtried other means of opening up the channel in the past to no avail. In the spring, they raised $171,000 for the fish ladder project. Much of it came in grants from environmental non-profits like the Canadian Wildlife Federation and Pacific Salmon Foundation. But Thunderbird Marina, which owns the land where the stream runs into Fisherman’s Cove, also put up substantial cash and “bent over backwards” to get the construction done, said Keith Moger, Streamkeeper volunteer and leader of the fish ladder project.

The Department of Fisheries and Oceans and the District of West Vancouver assisted with the regulatory approvals to do the work. A company called ISL Engineering did the design pro bono. The ladder is tailored specifically so chum will be able to easily access it at high tide.

“Chum are lazy swimmers. They like a shallow gradient,” Moger said.

A week after the ladder was completed late last month, Moger spotted two chum salmon headed for the ladder in Fisherman’s Cove. Later that morning, his wife snapped pictures of them making their way up and into the creek.

“It was this terrific, rewarding moment,” Moger said. “It was great to see them returning to Nelson, which hasn't had a chum return probably in the last 10 years.”

Chum salmon live a four-year cycle before returning to their home creek to spawn. This is expected to be a high year in their population cycle based on the size of 2016’s return. Brothers and Hadden creeks have been “chockablock” with chum so far this fall, Barker said.

The Streamkeepers stock Nelson with salmon fry every year. The hope now is that in four years’ time, the descendants of today’s returning fish will make it back to their homewaters to spawn the next generation naturally.

“We are very hopeful and somewhat optimistic that we'll see stronger, increasing returns of chum and coho into that creek where they haven't been returning for a long time,” Moger said. “It is a great habitat. We just couldn't get the fish in there before getting this fish ladder finally installed and operational.”