Scheduled for leasing next summer and occupancy in Dec. 2021, the building is to include four non-market suites and three fully accessible suites.
Jun 11, 2020 3:17 PM By: Bronwyn Beairsto 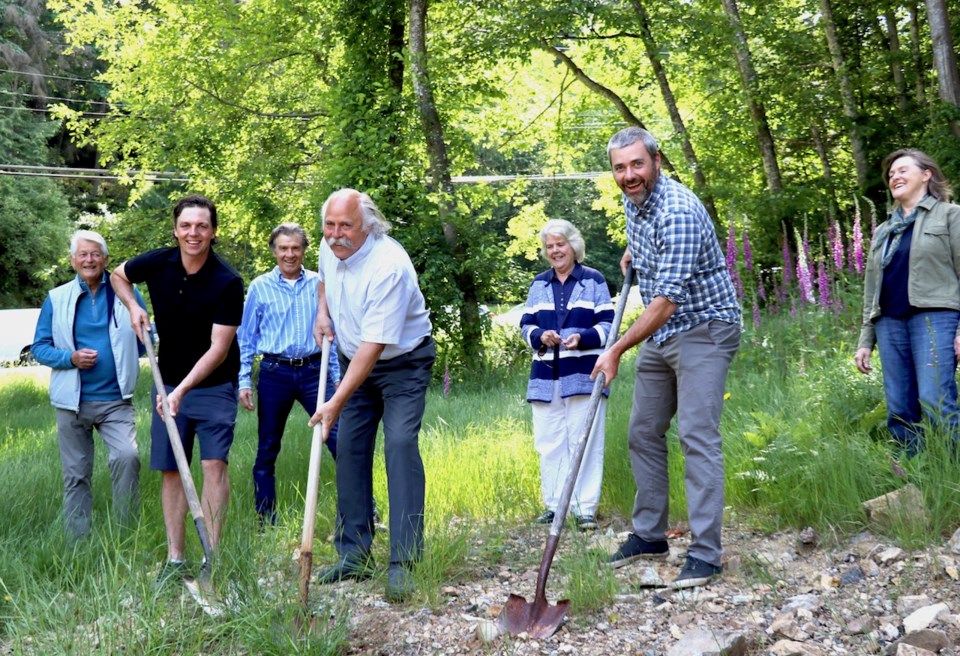 Three rusty shovels dug into the gravel across from the museum Monday afternoon but the grins were golden.

The ground breaking marked the closing of the first sale of a parcel of Bowen’s Community Lands and the beginning of construction for the 27-unit rental housing project.

D.K. Harris Properties entered the agreement to purchase the land last July and the sale closed Monday. Construction will start this week or next said co-owner Rob Purdy.

Under a housing agreement municipal council passed in January, all units in the building must be rentals with priority given to residents of or employees on Bowen (or residents before retirement).

Scheduled for leasing next summer and occupancy in Dec. 2021, the building is to include four non-market suites and three fully accessible suites. The annual rent on the non-market units cannot be more than 30 per cent of the BC Housing-determined Housing Income Limits (an income threshold under which households are eligible for this housing).

Purdy added that the building’s features include electric vehicle-ready parking and a publicly accessible carshare.

“[David Bellringer, the other co-owner] and I both agree there’s a need for more housing diversity on the island,” said Purdy in an email. “I have been doing a lot of work with a non-profit housing provider in Vancouver and Dave has been the owner/operator of Village Square for a number of years, we decided to combine our experience to try and get some new housing built that will contribute to this diversity.”

“It takes a small army of people to get a project like this off the ground,” said Purdy in another email. “We’d like to thank everyone who has been involved in making this happen including Municipal Staff, Mayor and Council, Bowen based architect Martin Pykalo and his team, our entire consultant team, and our construction manager Peter Winckler.”

“Rental housing on Bowen Island has been identified as a shortage for quite some time now,” said Mayor Gary Ander in an email. “We are excited to have worked out our first sale of Community Lands for this designated rental accommodation project we so desperately need to help ease our current shortfall.”

BIM bought the Community Lands from Metro Vancouver for $2 million in 2005. The plan back then was to recover the money by selling off some of the land, however this sale is the first to that end. The Bowen Island Health Centre Foundation is buying a parcel of Lot 3 (across from the ambulance station) but that sale has yet to close.

In 2019, that debt went from short-term to long-term debt.

There are no items to show.