Three days into the federal election campaign, May dropped into the West Vancouver-Sunshine Coast-Sea to Sky Country riding to rouse support for Green candidate Dana Taylor
Sep 15, 2019 7:00 AM By: Bronwyn Beairsto 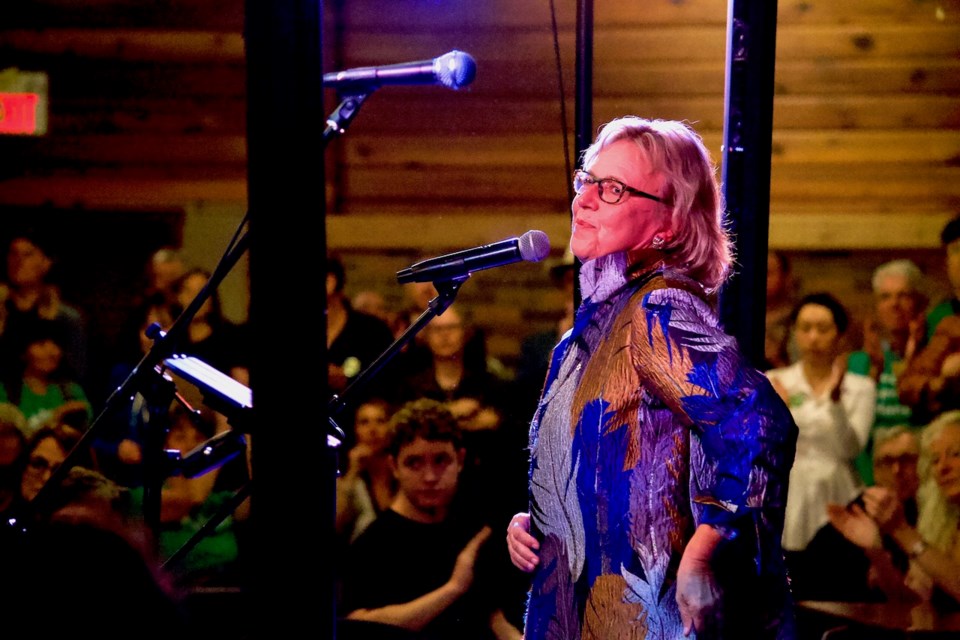 It wasn't a tough crowd for the Green Party leader as people crowded into the Gleneagles Golf Clubhouse to hear Elizabeth May speak.Bronwyn Beairsto/Bowen Island Undercurrent

May told the Undercurrent she believes that the Greens have an “excellent chance” in West Vancouver-Sunshine Coast-Sea-to-Sky Country, in part because of Taylor’s track record in the last provincial election.

“With virtually no campaign support and without the B.C. Greens really identifying that this was going to be a place that would make a big breakthrough, Dana's numbers––he got a third of the vote and he came in a strong second,” said May. (Taylor got 29 per cent of the vote in the West Vancouver-Sea to Sky riding in the 2017 provincial election. He was second to B.C. Liberal Jordan Sturdy’s 43 per cent).

May also noted that having no incumbent in this riding is helpful for the Greens. Liberal MP Pamela Goldsmith-Jones (who got 54.7 per cent of the vote in 2015) opted not to run for re-election.

“We were already thinking it was a winnable riding when she was planning to run again,” said May. “When she stepped down, it just it levels out the playing field a whole lot more.”

“Dana is a great candidate so I'll be back,” said May. “I want to make sure Dana Taylor joins me in Parliament for sure.”

In this two-day trip out West, May also visited Mission-Matsqui-Fraser Canyon for her husband John Kidder’s campaign launch and Salt Spring Island, in her own Saanich-Gulf Islands riding. She heads back to Toronto Sunday. May is the only national leader so far to visit West Vancouver-Sunshine Coast-Sea to Sky Country in the (still-young) campaign period.

Discussing topics that affect constituents in Taylor’s riding, May noted her displeasure with the approval of the Woodfibre LNG export facility in Squamish and the lack of exclusion zones around tankers, comparing the tankers to “floating bombs.”

“The United States has much stricter regulations around the movement of liquefied natural gas than we do in Canada,” she said. “They have exclusion zones all around them for fear of terrorism.”

On the topic of derelict boats, May said that she’d worked hard on the issue and had long supported Bill C-64 (Wrecked, Abandoned or Hazardous Vessels Act) that passed earlier this year prohibiting abandoning of vessels or failing to maintain a vessel until such a point that it becomes a wreck.

“It's not all done yet but we've made a lot of progress on building up a regime and funding to remove derelict vessels,” said May.

One of the controversies to pop up this week with respect to the Green leader came when May told CBC she wouldn't prevent a Green MP from re-opening the abortion debate. (The controversy came up after previous anti-abortion comments from a Green candidate came to light earlier this week––May has since re-stated her and the party’s pro-choice stance and said that the party is re-vetting said candidate.)

Though she didn't discuss abortions Saturday evening, May brought up the topic of whipping in relation to what's expected of MPs in other parties.

She said that under the policies and bylaws of the Green Party, she’s “not allowed” to whip votes. However, she also said that you can’t be a Green Party member of parliament and “vote for something that blows through our carbon budget.”

'The fight of our lives'

And, naturally, the climate crisis came up.

“It’s the fight of our lives,” said May. “By 2023, in the next election, if we haven't taken corrective action to chart a course to be to be post-carbon, stop burning fossils all together…

we get to that place before 2023, we have a secure future. If we fail, the window on holding to 1.5 degrees Celsius will close.” (The Intergovernmental Panel on Climate Change said in 2018 that the planet needs to stay below 1.5 degrees Celsius warming to prevent some of the catastrophic consequences of climate breakdown.)

May called the Greens being in a position of having the balance of power after this election, “the ideal scenario.”

“We have to have real climate action and that's only going to happen if [the Green Party is] holding enough of the cards to be able to say, okay, you won't pass your first confidence vote unless we have that 1.5 degrees as the actual goal,” she said. “The target we have now, that was left behind by Stephen Harper, has to be doubled.”

“The main thing is to make sure that the Liberals and the Conservatives can't form government without having to get the support of other parties,” she said, pointing to former (Liberal) prime minister Lester B. Pearson’s minority governments of 1963 to 1968 (which saw the introduction of universal health care and the 40-hour work week) as a possible model.

But May said that in a situation where a party needs Green support, it’s 1.5 degrees Celsius or nothing.  “We'd be prepared to go right back to the polls, with all the risk that implies of not doing as well,” she said. “But it's going down the road of a hypothetical probably a bit too far.”

May told the crowd to expect the Green Party platform Monday, though the accompanying budget will take some more time as it’s being vetted by the parliamentary budget officer.

May said that she doesn’t personally have Facebook and noted that even the Green Party using Gmail was concerning to her.  “I look at the privacy issues as extremely important,” she said. She later told the crowd that she would tax corporate giants such as Facebook, Google and Amazon.

When addressing the audience, May alluded to her faith with a crack, “Why did Justin Trudeau pick an election  that's 40 days long. What else was 40 days and 40 nights?” (In a CBC interview earlier this week with Power and Politics host Vassy Kapelos, May said that her personal hero is Jesus Christ and then apologized because “politicians in Canada should not put their religion on her sleeve.”)

As for the other parties in the riding

Back in May the Conservatives nominated Gabrielle Loren, a North Vancouver chartered accountant running in her first federal election.

Following Goldsmith-Jones’s departure from the race, the Liberals nominated Patrick Weiler, described by the party as an environmental and resource management lawyer and international development professional. He lives outside of the riding but has said he grew up splitting his time between Sunshine Coast and West Vancouver.

People’s Party nominated Doug Bebb, a semi-retired mechanical engineer from Whistler, who is also running in his first election.

The NDP have yet to announce a candidate for the riding.

––With files from the Coast Reporter