It just got a little harder to get lost on Mt. Gardner

Bowen Island Trail Society spent last weekend putting up reflective markers to help people find the way up and down the peak.
Nov 22, 2018 11:19 AM By: Bronwyn Beairsto 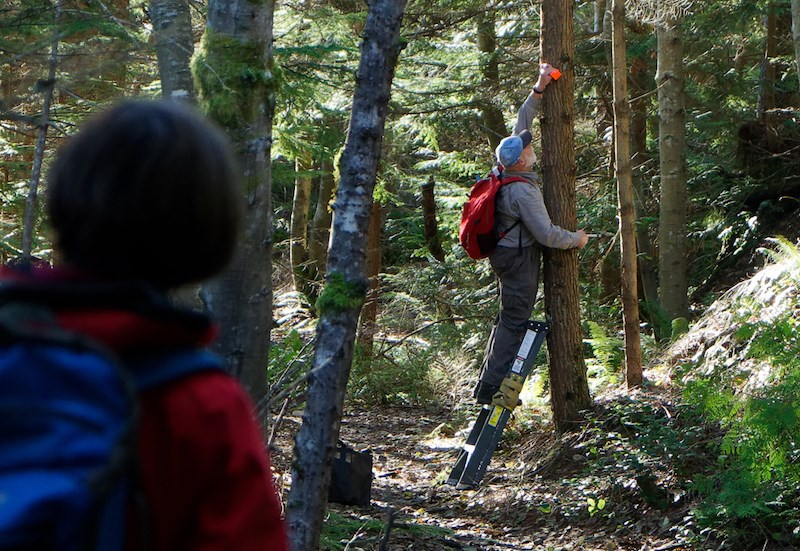 Historically, one of the challenges of hiking up Mt. Gardner has been to figure out exactly where the trail is. School groups, tourists, locals, have all lost their way amidst the cedars and pines and branching trails at one point or another.

The Bowen Island Trail Society (BITS) organized the work party, which involved just as much pulling down old unofficial markers, left by various community members over the years, as putting up new ones.

The society is part of a Bowen trails coalition formed last May. In partnership with the Crown (which owns 40 per cent of the land on Bowen, including much of Mt. Gardner), Bowen Trail Riders Association and Bowen Island Horse Owners and Riders Association, BITS is trying to improve signage and navigation on Bowen trails.

As BITS is working with the province, all markers and signage need to have B.C. Parks approval, otherwise Schultz jokingly added, action figures would have pointed the way to the top.

Schultz says that the new reflective markers should make the trail discernible, even in bad weather or darkness.

This Mt. Gardner project is a trial run and BITS is looking for community input about how useful hikers find the new markers. For that email info@bowenislandtrailsociety.ca, or message the society on Facebook.

Phase two of the project would be proper and consistent signage on the trails.

The society has got a couple of prototypes in the works, but Schutlz says that the organization is aware that this could be a sensitive point on Bowen.

“What everybody loves about these trails is that they’re really raw,” he says. “You can feel like maybe you’re the first one to walk there in a while.

“The last thing we want to do is overdevelop the trails,” he says.