Multiple agencies are investigating a major fish kill in West Vancouver’s McDonald Creek. A passerby on the seawalk noticed dead fish floating in the mouth of the creek around noon on Monday and reported it to the District of West Vancouver.
Sep 22, 2020 4:59 PM By: Brent Richter 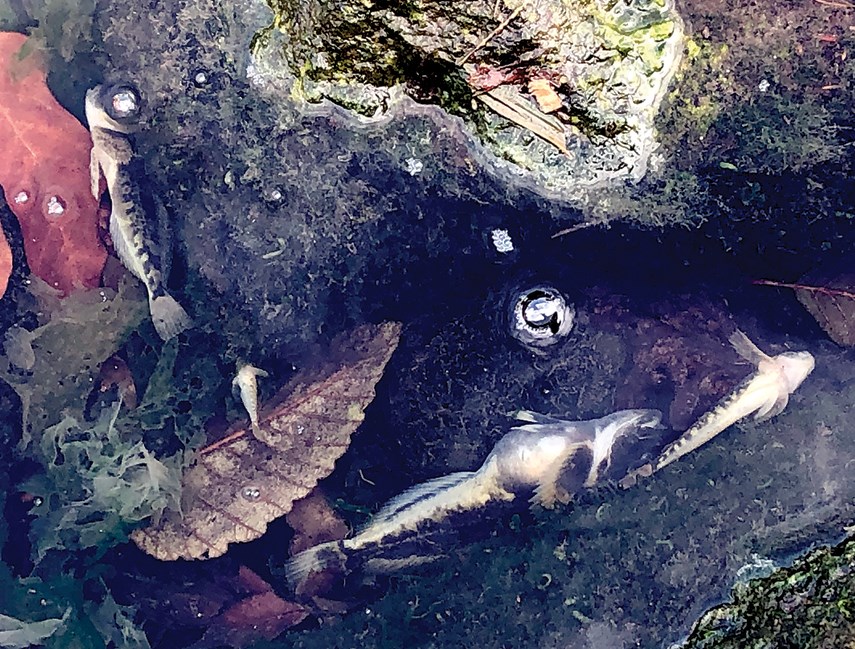 A passerby on the seawalk noticed dead fish floating in the mouth of the creek around noon on Monday and reported it to the District of West Vancouver.

District staff tracked the pollution back to its likely source – contractors power washing the exterior of a condo building at 1962 Bellevue Ave.

“They were using a very high bleach content cocktail in their power washing,” said Don Harrison, director with the West Vancouver Streamkeeper Society. “It was, of course, washing straight into the creek, which everything in West Vancouver eventually does, and killed the fish immediately.”

District staff counted 100 to 150 dead fish in the creek below Bellevue. About 80 per cent of the carcasses were sculpin. Another 20 per cent were coho salmon. The pH level of the water reached 11.

“Very, very caustic,” Harrison said. “It pretty much wiped out everything in the creek because it is so toxic.”

The district treated the water in the creek with pH balancing pucks, and heavy rains this week will flush out what remains of the toxic cocktail. But the chemical plume wouldn’t have just killed the fish, Harrison said. It would also have wiped out the insects, invertebrates and algae that are key to the overall health of the stream.

“It’ll repair itself, but, you know, it takes time,” he said.

District of West Vancouver bylaw staff are investigating. According to the district, the contractors may face fines of up to $750 for violations of the watercourse protection bylaw and parks regulation bylaw. Environment Canada is also investigating whether there were violations of federal statutes, which may carry more severe penalties.

Harrison said he hopes the investigation will result in fines and, more importantly, awareness among other contractors in the Lower Mainland.

Harrison said it is particularly disappointing because the Streamkeepers have invested a lot of volunteer hours and resources into making McDonald Creek habitable for salmon.

Most of the juvenile salmon would have been ones the Streamkeepers stocked into their specially made rearing ponds, designed to give the fish the best possible chance at surviving to maturity and returning to spawn. Those fish killed in the spill would have been bound for the ocean next spring.

“McDonald Creek is one of the ones we like to showcase,” he said. “There is not much you can do. The cycle continues. We will release more fish  next spring.”

In 2017, a major spill by a Ministry of Transportation and Infrastructure contractor working on Horseshoe Bay’s Larson Creek nearly wiped out a genetically distinct line of cutthroat trout. The Streamkeepers are impatiently awaiting word on whether that will result in any charges.

Anyone with information about the spill or any other environmental disaster is asked to contact the province’s hotline for reporting polluters or poachers at 1-877-952-7277.

Without witnesses calling it in, the McDonald Creek spill could have been worse, Harrison said.