Just as COVID-19 was taking root in B.C., Matt Laudrum was rediagnosed with astrocytoma glioma. Now Bowen Islanders are raising money to help out the 36-year-old islander.
Mar 1, 2021 9:49 AM By: Bronwyn Beairsto 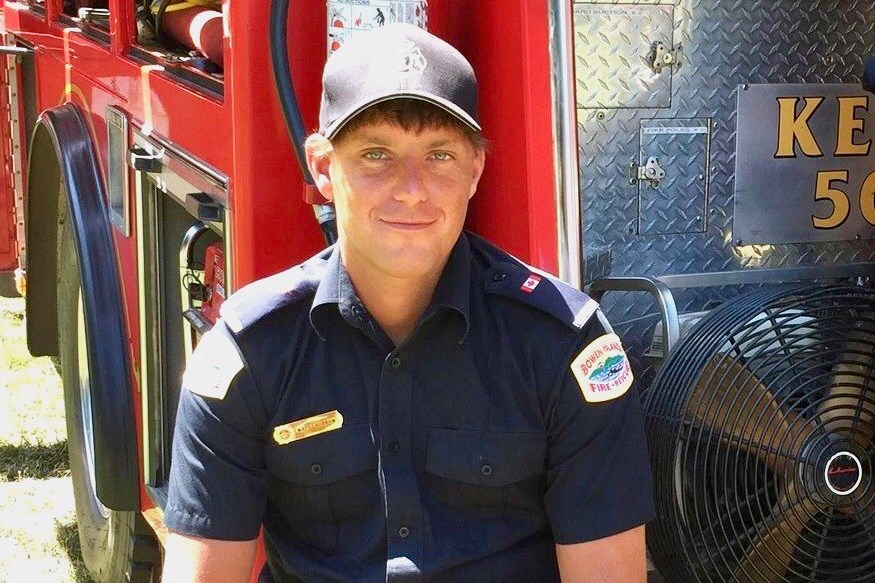 Local volunteer firefighter and a Bowen-raised kid Matt Laudrum is facing brain cancer with the support of many islanders.Dayna Woodman

Matt Laudrum jokes that he’s got the hair texture of his dreams. All it took was chemotherapy and radiation therapy to get there.

The 36-year-old, born and raised on Bowen (his parents are Sandi and Ernie Laudrum), was diagnosed with astrocytoma glioma, brain cancer, in January 2017.

“No problem, after radiation, chemotherapy and…” his girlfriend Moira Steward chips in.

“No problem,” reiterates Matt. “But it’s a little different this time.”

Really, where Matt wants to be these days is in the cab of his excavator. Georg Helenius introduced the then fresh-out-of-high school Matt to the trade more than 15 years ago and Matt never looked back. He worked on the Sea to Sky Highway construction and the Port Mann Bridge project before joining his current company Twin Island Excavation, which is working on subdivisions at Cowan Point.

“My favourite place to be is in my machine,” says Matt. “But I’m not allowed to work right now.”

Rediagnosis at the beginning of COVID-19

Just as COVID-19 was taking root in B.C. in March 2020, an MRI showed that Matt’s tumour was back. Because of the size and placement of the tumour, it’s inoperable.

The first round of cancer in 2017, doctors treated with radiation and IV and oral chemotherapy. It was an experience Matt calls a blessing in disguise. “It made me a better person,” he says. “It made me who I want to be.”

When the cancer came back in 2020, the oral medication (sent in the mail because of COVID-19) didn’t work. So now Matt needs harsh IV chemotherapy every four weeks.

“His struggle’s gotten a lot harder because it is back and it always is harder the second time round,” says Moira. (She and Matt started dating near the beginning of his rediagnosis.) “They’re hoping to get it under control enough so that it doesn’t keep growing.”

Matt and his twin brother, Mike, were raised on Bowen, attending BICS and West Vancouver Secondary School. After leaving the island for a decade to work on the mainland, Matt returned to Bowen nine years ago and the twins bought a house together and now serve on the volunteer fire department together. (Matt has since sold his part of the house to Mike.) Matt loves being a part of Bowen Island Fire Rescue but the cancer has too affected that. “I’m not allowed to go on any calls,” he says.

There’s also the challenge of COVID-19 – navigating a deadly pandemic while having a weakened immune system – but even there, there’s a bright side. “COVID is bad but it made it easier for me because everyone has to stay inside,” laughs Matt.

As Matt’s not allowed to work, local fundraising giant Basia Lieske has set up a GoFundMe for him.

“That community support has actually been fundamental,” says Moira. “It has been so appreciated.”

Matt has also had support from SwimBowen, Cates Hill Chapel and the Community Foundation’s Helping Hands fund. The islander offers thanks to everyone who has supported him – from Lieske, to the GoFundMe contributors, to the local organizations with support funds.

“This, this community is amazing,” says Matt. “They’ve all come together.”

“I just love my life over here.”