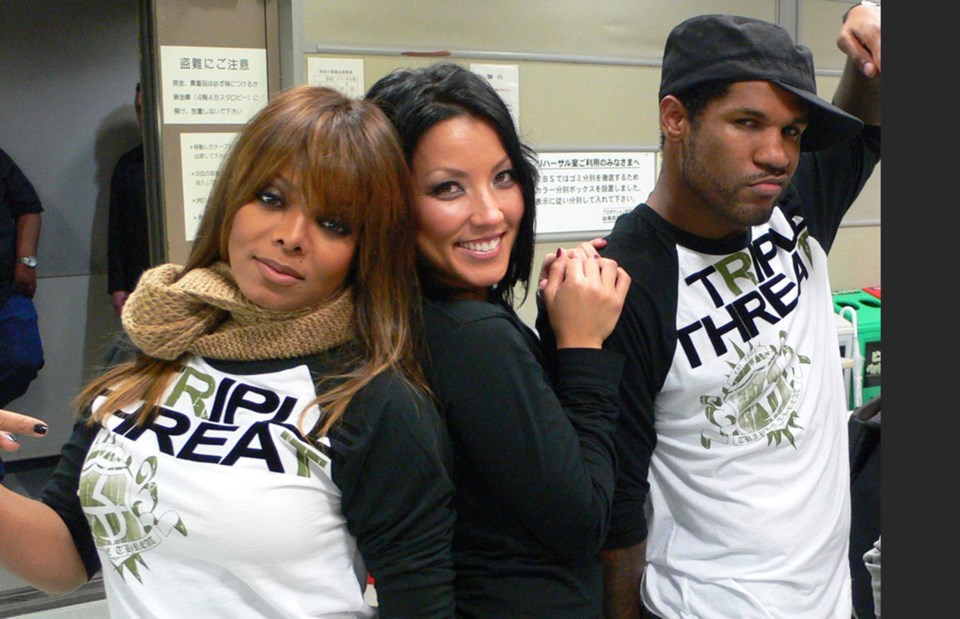 Local resident Kelly Konno spent more than a decade as a dancer with big-name acts, including Janet Jackson.Photo contributed

When Kelly Konno picked up her mail from the island post office this week, she was pleased to get a gift package with a cartoon character, Hello Kitty, inside. Konno’s “very close friend, Janet, had sent it from Japan. Janet, the sender, was none other than Janet Jackson, with whom Konno toured for a decade.

Konno explains, “She knows I love Hello Kitty; my company is called Hello Kelly.I was her right-hand woman for 10 years. I’m close with the entire Jackson family. I got to dance with her broth­er,“ she says, referring to Michael Jackson. “It’s weird, saying I’m friends with the Jackson family. But I am friends with them.” She is feeling the disparity between a world where celebrities live their high-octane lives and her small island world where the front-page news is a man shaving his moustache.

Konno got an early start on her career, heading to a dance school in LA on the day she graduated from high school in Surrey. “I was 17. I had saved up to pay for my flight. I had a scholarship in my hand for dance classes and I was gone.” She flew to the school where she’d taken dance classes every summer, and moved in with other Canadian dancers. Every minute of her day was focused on dance. For a year, it was rough, with no work visa and minimal opportuni­ties for work. “I lived at the studio, went to every audition and worked for free to get in the door.” Life changed for Konno the day she auditioned for Janet Jackson’s choreogra­pher. “She really liked me but didn’t have any openings, so she got me a seven-week tour with Prince.”

When her tour with Prince ended she got word that there was an opening for a dancer for Janet Jackson. Konno got the part vacated by Jennifer Lopez, who was leaving dance to get into acting.

Barely out of high school, Konno was living the dream but rehearsals took eight hours a day, 6 days a week, “leaving one day for life. – so I could do things like pack a suitcase and do my banking.” Touring the world, she was dancing in an average of 4 . shows a week which Konno describes as less grueling than the demands of rehears­als. While touring with Janet, she performed at the Grammy Awards, MTV Video Music Awards, and the American Music Awards as a dancer for Pink. “She’s super cool. I love her. I would have loved to be one of her dancers.”’

Konno has also danced on The Oprah Winfrey Show, Saturday Night Live, and The Tonight Show with Jay Leno. ”Oprah was really nice to me,” says Konno, “but she was hard on Janet Jackson.”

When Konno got to dance for Michael Jackson for two months, “it was pretty life-changing. I was in awe of him,” she says. Michael would give tips and pointers as they practiced. All she could think was, “I am here to serve. You tell me what to do and I will do it. “

Konno says Michael was a perfection­ist. “He was great. Really funny. He liked to play jokes on the dancers.” Konno got to do a short film with him, called Ghost, for Halloween.

In working for Michael she learned to be completely present and completely focused and humble. She had to take care of her­self by keeping herself healthy and building stamina for a grueling schedule. “I needed stamina to do so many rehearsals. I was just excited to dance.”

She went on to do a world tour with Justin Timberlake who treated the dancers like friends, practicing routines along with them. “He dances like a professional dancer.”

As a backup dancer for Prince, Justin Timberlake, Michael Jackson and Janet Jackson, Konno has had more than her fair share of excitement. Now, she is happy to set roots in one place. “I really wanted to come back to Canada,” so she finished touring and came back to Vancouver.

While living in Coal Harbour, Konno’s husband, an artist, suggested Bowen Island as a place to investigate. They immediately fell in love with the island and decided to rent for half a year to try island living. Now, after two years, and a new home, they are planning to stay.

“I love going for a run and not passing a person. I love nature and being surrounded by other artists. I can’t get over where I live. I never want to leave. I could become a her­mit,” Konno says laughing.

Konno, who is hard working and driven, bubbles with conversation and stories like your best friend in a catch-up conversation. As an entrepreneur, an actor and choreogra­pher, Konno says that she left the touring life because, after three world tours with Janet Jackson and one with Justin Timberlake along with dancing in videos and movies. “I didn’t want to be a background dancer the rest of my life. I’m a homebody. As I got older I started craving that more.”

Konno shifted her focus on other aspects of her career. Konno had been the direc­tor and co-owner of Triple Threat Dance Convention for 19 years, and could now drive the business from home on the island. “The convention brings top instructors from LA and other cities to Vancouver to train and inspire dancers.” It also moves across the country, as Canada’s largest dance conven­tion.

Meanwhile, here on Bowen, Konno is offering something special for the locals called “Bowen Dance Cardio.” She’ll be doing the course in February on Friday nights and Saturday mornings in Artisan Square and you won’t need any dance experience to take part.

Konno points out that she did the chore­ography for a reality TV show, Canada Sings, where she had seven days to teach non-danc­ers to dance.

“Watch the show. You’ll laugh.” She says the experience showed her that she could teach almost anyone to dance.

Konno, with her outgoing but private per­sonality says it’s uncomfortable to let people know about what she has to offer.

“It’s hard for me to put myself out there,” she says, which seems counterintuitive. “I’d love to share my knowledge and talent here on Bowen, and work with youth. I love kids.” Now that the word is out she’s certain to get her wish.

Bowen has a lot of kids who will love an opportunity to learn from a woman who learned from the best.