Three local groups signed a partnership agreement with the province, which allows them to do trail work on Bowen
May 8, 2018 1:06 PM By: Bronwyn Beairsto 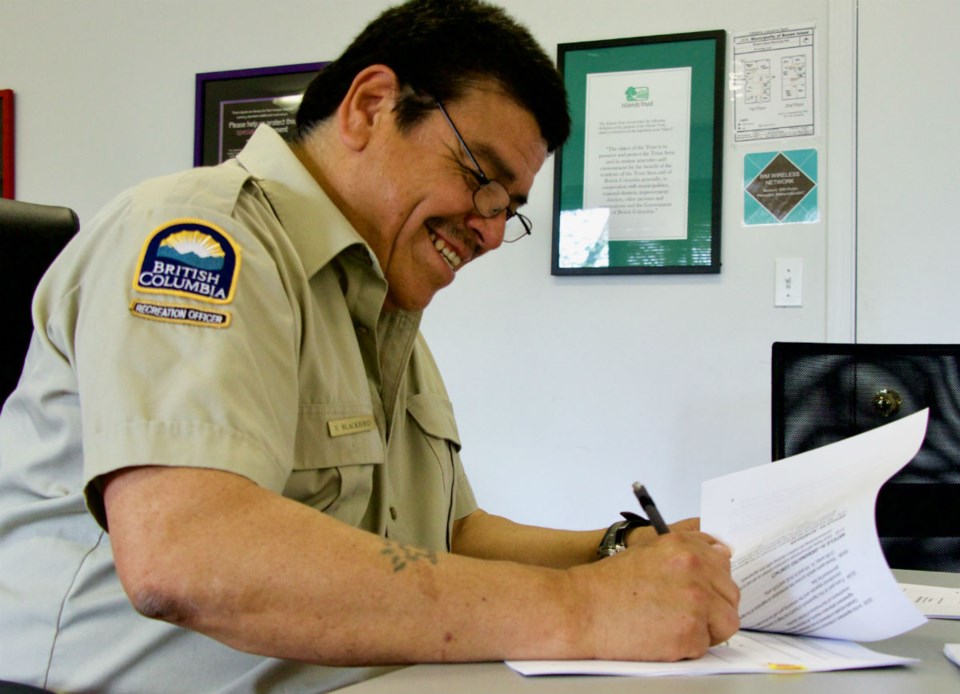 With a swipe of his pen, B.C. recreation officer Tom Blackbird gives local organizations the legal ability to fix up and mark Bowen trails.Bronwyn Beairsto

More than half a decade ago, 12-year-old Sophie Walters’ class got lost on Mt. Gardner.

“When there was a look-out point, there were three to five different trails to go on,” the Undercurrent reported Walters saying back in 2014. “There were even some trails that lead you all the way to the bottom of the hike.”

When the Rotary Club asked local youth how to make Bowen a better place, Walters spoke up.

But, until last Thursday, locals weren’t technically allowed to modify the trails or their signage. Much of the land on Bowen Island is Crown land, including Mt. Gardner, and on this land, the province had to look after all trail modifications.

“There’s a lot of work that needs to be done and with three organization coming together, that’s going to make it easier,” said BTRA president Kevan Bernards at the signing. He and representatives from the other groups gathered in the municipal council chambers to ratify the deal.

“It is a really exciting day and it’s been a long time coming,” said BITS president Alicia Hoppenrath.

Tom Blackbird, the recreation officer for forests, lands and natural resources, was present, representing the Crown.

After congratulating the groups on having reached this milestone, Blackbird explained that this agreement would last for two years. This short committal period would allow for all parties to see if the agreement worked for them. After that it could be extended by five or 10 years.

“It’s not a final document,” he said. “We do have that flexibility to amend it.”

But, warned Blackbird, “Just because the agreement’s signed doesn’t mean the headaches are over.”

Indeed, three very different groups have come together in what Chuck Venhuizen of BITS called an “informal coalition.”

BITS is dedicated to non-motorized trail use on Bowen, BTRA is for off-road vehicles and BIHORA is for equestrians. While the organizations’ membership and interests overlap, BITS and BTRA each have their own projects.

BITS is starting with a navigation project, where they will improve trail markings and signage.

“We want to give trail users a more positive experience,” said Venhuizen.

However, how much they can get done will be dependent on the volunteer base. They’ll start with one trail this year, and go from there. “Once we look at all the work we have to do, then we’ll decide what the best approach is,” said Venhuizen.

BTRA will be replacing a bridge and relocating part of a trail at the beginning of Handloggers. Bernards said that they hope to have this project done by September, when BITS holds its annual Handloggers half marathon.

Kirsty Johnstone is the secretary of BIHORA. She said that because their society is so small, they don’t have a project of their own.

“We’re going to help people on other projects,” said Johnstone. “The signage will be really great for riders who haven’t used the area much.”

“We want all the trails that are developed on the island to be horse-accommodating,” she said. “We’re in it as a support group.”