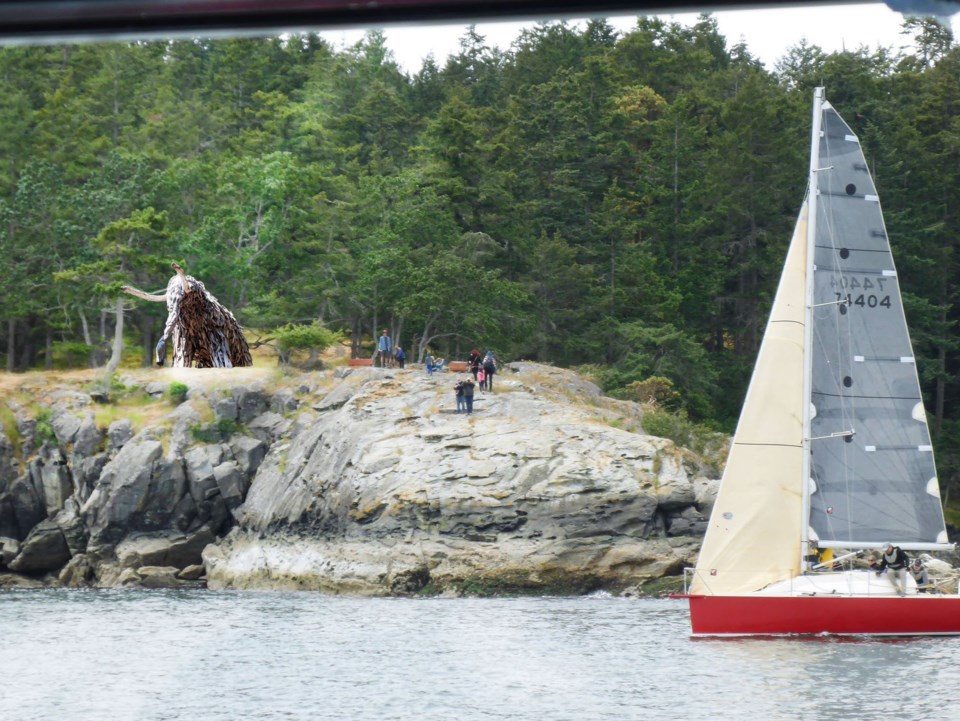 A mastodon perched on the shoreline of Salt Spring island Monday morning. The driftwood creature looks suspiciously like the one missing from Bowen Island.David McCullum

Once, they roamed all of North and Central America. Now, for the first time in millennia, a mastodon roams again.

For more than a year, Bowen has been the not-so-secret home of a driftwood mastodon. The artistic installation by local artist Guthrie Gloag has drawn tourists and locals alike to the proboscidean’s private perch. However, it appears that over the weekend Salt Spring Islanders stole the mastodon and installed it on their own shoreline.

“I’m glad to know I wasn’t going crazy,” says Bowener Nick Charles, who said he thought he saw the silhouette of an elephant trundling down his street Saturday evening and reported it to police.

The thieves are thought to have rented a moving van on the mainland, driven it over, loaded up the 10-foot-tall sculpture and taken the three ferries to Salt Spring Island. How the thieves then got the mastodon onto the cliff’s edge, where it now overlooks the Howe Sound Queen (Salt Spring’s ferry) route, is anyone’s guess.

Locals on Salt Spring seem quietly delighted with the migration.

“I can neither condone nor condemn this action,” said Dorothy Wynant, a representative from the Salt Spring Board of Tourism and Commerce. “But I can say that Bowen’s been bogarting the tourists in recent years. The mastodon gives Salt Spring a bit of an edge.”

The Salt Spring Police Force (SPF) is says that it needs to confirm that it isn’t a whole new mastodon.

“We’ve put in a call to Bowen RCMP,” said the SPF captain, Louis Renault. “We’ll have to get the artist out here to identify the work.

“The Bowen mastodon is quite famous now, naturally there’s going to be copycats.”

Meanwhile on Bowen, islanders have traipsed out to the mastadon’s former site, leaving bouquets of driftwood flowers and notes with wishes for the kidnapped creature to return home.

Of course none of this is true. Happy April Fools!