Bowen's second set of acting twins (we also have the Spear sisters) made their national TV debut Sunday
Feb 11, 2021 11:01 AM By: Bronwyn Beairsto 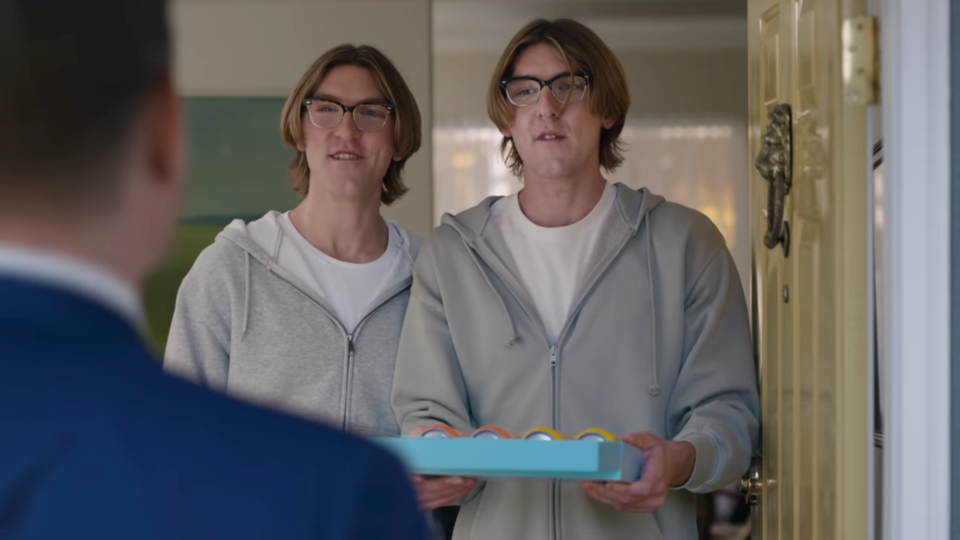 Bowen Islanders’ most exciting moment during Sunday’s Super Bowl had nothing to do with football.

Boweners got a thrill as island twins Wil and Daly Thompson, 23, popped up in a Canadian commercial for the sparkling water drink Bubly during the prestigious Super Bowl time slot, acting opposite Canadian singer Michael Bublé.

Since 2019, Bublé has been, in a self-deprecating gimmick, “correcting” the pronunciation of “Bubly” during the Super Bowl time slot.

In the 2021 iteration, Bublé is delivering the pop and the twins open the door.

“And new peach Bubly!” They chorus.

A surprise for all

Not being football fans (“We’re actors,” explained Daly) the twins weren’t watching the Super Bowl and missed their ad’s debut.

“We didn’t have any idea was coming out,” said Wil. “It was a surprise to us.” (Since they were introducing peach and pineapple flavours, they figured the ad might have a spring debut).

But there’s been a roaring response on Bowen Island.

“Just going to get a coffee, we’ll have like 10 people say something,” said Daly. “It’s nice having all these people who we grew up with be like, ‘Hey, that was so exciting to me.’”

The twins, who caught the acting bug in 2017, have done a few projects so far, but nothing on this scale. “It’s our biggest project yet,” said Wil. “It wasn’t even really acting. We were just playing ourselves.”

While filming the ad back in November, the twins got to meet and act off of Bublé. “He’s a really nice guy,” said Wil.

As for what’s coming next, within 12 hours of the ad airing the twins got a new audition and they’re hoping the ad will lead to more work.

They’re also working on writing some of their own stories and short films.

Meanwhile, the Undercurrent hasn’t checked in with local stores to see if on-island Bubly sales have gone up in the last four days. (Did you run out to try some Bubly? Sorry, Bublé.)