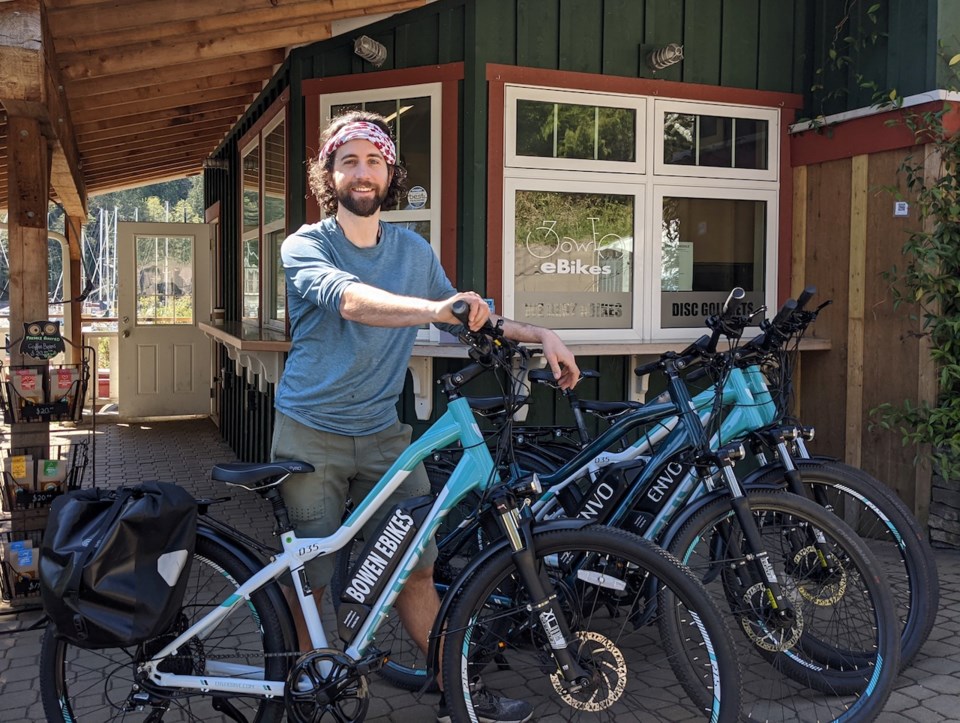 Bowen eBikes down by the ferry terminal rents and sells e-bikes as well as sells conversion kits.Bronwyn Beairsto

The weekend stream of cyclists peddling down Grafton Road has grown in recent weeks as sunny skies and warm temperatures beckon bikes to Bowen roads. But, our island’s potholed roads, blind corners and many, many hills also mean that cyclists and drivers have hazards not seen in the city.

The Undercurrent talked with Brendan Robertson – a former competitive triathlete and owner of Bowen eBikes in the Cove (where the Espresso Hut used to be) – about some safety tips for all.

“We need to almost reset expectations of drivers, because bikes will be moving up hills at a much greater speed,” he said.  Where regular bikes typically travel uphill at five to ten kilometres an hour, a top-tier e-bike can travel 20 kilometres an hour uphill. A driver coming up to an intersection, may not expect a bike to catch up at the speed it does.

Furthermore, regular bikes can turn into e-bikes with a conversion kit. “Anybody on a two-wheeled device…good advice is to just think of it as an e-bike, because that’s what we’re seeing a lot more on Bowen Island,” said Robertson, “now that the technology is so much more accessible for people to go out there and just pick up e-bikes.”

Watch for cyclists travelling closer to the middle of the road on Bowen as our roads tend to be rough along the edges, said Robertson. “They definitely have every right to be there,” he said. “Cyclists, I would say, should stick to the edges of the road as much as possible. However, on Bowen Island specifically, it can sometimes be a little bit rough.

“So drivers need to watch out for cyclists veering in and out of those potholes on the right.”

Bowen has many narrow roads and hills adding difficulty to passing cyclists.

“One thing that I’ve noticed drivers tending to do is they see a cyclist slowing down for the hills, they’ll be patient for a little bit, and then that patience wears off just as they’re about to crest the hill,” said Robertson. “That’s a pretty poor area to pass the cyclist at because you don’t know what’s coming over that hill. You don’t have the room to manoeuvre there.”

When passing a cyclist, Robertson recommends a 200-metre line of sight and a slight uphill (so the cyclist is travelling slower). He also recommends spending the least amount of time possible besides the cyclist (without speeding past as that can also be dangerous). “Drivers taking more than 12 seconds to pass a cyclist can lead to dangerous situations on our narrow roads, where the car inadvertently runs the cyclist into a pothole or off the road,” said Robertson. “Passing should take a relatively short amount of time, or just wait for the cyclist to wave them by. I would not pull alongside a rider in a car. Either stick in front or behind them.”

Under B.C. law, drivers must allow at least one metre between car and cyclist.

“When locals are driving to their homes, I find that they tend to be a lot more forgiving of cyclists,” said Robertson. “They tend to take their time – they’re an island time.”

But on the Eastward journey to the Cove, there’s often the pressure of making the ferry. “It rarely happens on Bowen but that’s the time when you’re going to see drivers making poor decisions,” he said.

“[The Eastward trip] is when I tell my groups, if you see a line of cars forming behind you please pull over to the side wave them by because they’re trying to make the ferry,” he said.

“At the same time there is a major responsibility of cyclists to adhere to stop signs, and traffic laws if they want to be on the road ways,” said Robertson. “Burning through stop signs is not a great way to share the road with two-ton vehicles.” Stop signs are where Robertson, in his earlier cycling life, saw the most accidents.

“My former cycling coach told me, there’s only one rule when it comes to sharing the roads with cars and it’s that cars always win.”

Horses and pedestrians have the right of way on the trails and “bell or yell” if you’re coming up on someone, said Robertson. Ride single-file along a roadway and for those cycling in the dark, lights are a very good idea. Also, wearing a helmet while cycling is B.C. law.

“Cyclists need to watch out for doors being opened inadvertently in front of them from parked cars,” said Robertson. “Generally I say to cycle 1.5 to 2 metres away from parked cars. This is especially true with our ferry lineup situation.”

On the other hand, drivers and passengers opening doors should check blind spots and mirrors before slowly opening their doors – Government of B.C. guidance states.

Cars and bikes should signal. Robertson reminds of cyclists’ signals: “Left arm up (turning right), left arm out (turning left), left arm down (stopping), left arm waving back to front (signaling it’s a good spot for the car behind to pass and I will hold my line (keep riding in a straight line).”