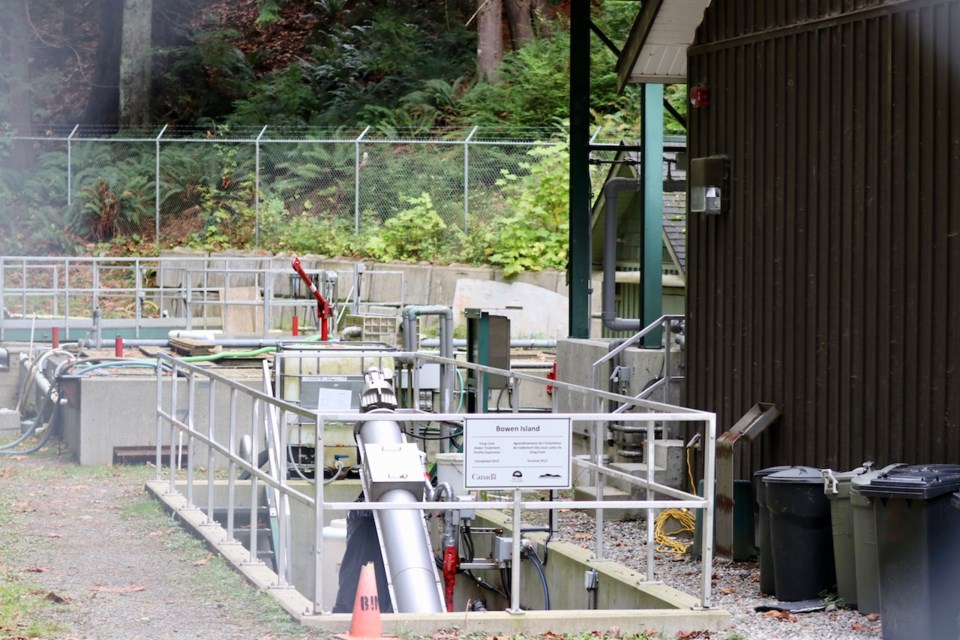 The Snug Cove Wastewater Treatment Plant is at capacity and is looking at a $3.6 million expansion to meet short-term needs.

Bowen Island Municipality’s director of engineering Patrick Graham laid out the plight of the plant in a committee of the whole meeting Oct. 13.

The system, built in 1999 and expanded in 2011, serves approximately 430 people (92 connections), likely to increase to 700 people in the short term, said Graham’s staff report. Like the municipal water systems, the sewage system is user-funded, so it’s separate from general municipal spending.

In the short-term, the plant needs “additional off-line equalization storage capacity, a fourth bioreactor, a new screening vault with a second screen added, additional UV disinfection capacity, and potentially an increase in backup generator capacity,” says the staff report. It goes on to say that one of the three bioreactors has been used as off-line equalization storage since 2017 and as such has been running at 75 per cent capacity. More such storage is the most-pressing plant need.

However, with more density planned and expected in the Cove and a population projections of up to 1,140, the cost of the long-term project is estimated at $7.6 million.

BIM’s first step is to do preliminary design work, which is where council will need to make a decision: the cost for a short-term preliminary design would be about $170,000 whereas a long-term design would probably be twice that, said Graham. “There [are] some advantages to looking at a comprehensive design process that looks at the planning and phasing and design for the entire suite of upgrades that are going to be needed,” he said.

But that’s not where the costs end.

With more people expected as regular system users, the plant will soon need to be registered under provincial and federal wastewater regulations (rather than the permit needed for its current size). This will require upgrades to the plant, said a report from consulting firm Urban Systems. The registration cost is $60,000 and a further $120,000 for the required environmental impact study.

Graham estimates a need for at least $350,000 over the next year for the above assessment and design needs. The system doesn’t have money in its reserves so this project will need funding through internal or external borrowing.

One of the short-term stopgaps may be an off-line equalization upgrade, which could see the Cove through the more immediate development pressures said Graham, but that would have to come through the preliminary design process.

“Typically, it’s better if you’re going to do a plant upgrade, to do it comprehensively as one integrated project,” Graham cautioned the committee. “When you start pulling out pieces, and doing them separately, it’s less cost effective and potentially not as good of a solution.”

Graham said the question of the equalization storage will be posed to the consultants. To that end, he is working on a terms of reference and request for proposals for the project.

Coun. Maureen Nicholson noted that if the upgrades are to address new growth, one of the options is to not do anything in the short run. “I could see some folks pointing to that,” she said. “I understand the pressures related to some of the projects are underway but that is an option.”

Graham responded to Nicholson that that may be part of the approach taken but some upgrades are needed to address already approved development.

This news comes as BIM faces infrastructure challenges in Eagle Cliff and with the West side water systems, specifically with Blue Water Park, and as Cove Bay Water System users take on the cost of the new water treatment plant (the water system serves significantly more people than the sewer system).

The Cove also has a number of developments under construction or in the works: the D.K. Harris rental housing project across from the museum, Snug Cove House, the community centre, the fire hall, the medical centre and Bowen Island Resilient Community Housing’s development.

While a committee of the whole meeting is composed of members of council, it isn’t a council meeting. The report from Graham was received for information but no further decisions were made in open council.

1
Bowen Islanders' new kids book chases away the monsters of childhood anxiety
2
Cameras in Snug Cove are for Netflix TV series
3
The last of Bowen's Christmas trees pass through the wood chipper for a good cause
4
LETTER: Please refrain from visiting new Cape park for now, B.I. Conservancy requests for sake of ecologically fragile areas
5
Bowen could be doing away with the island-wide pot selling prohibition