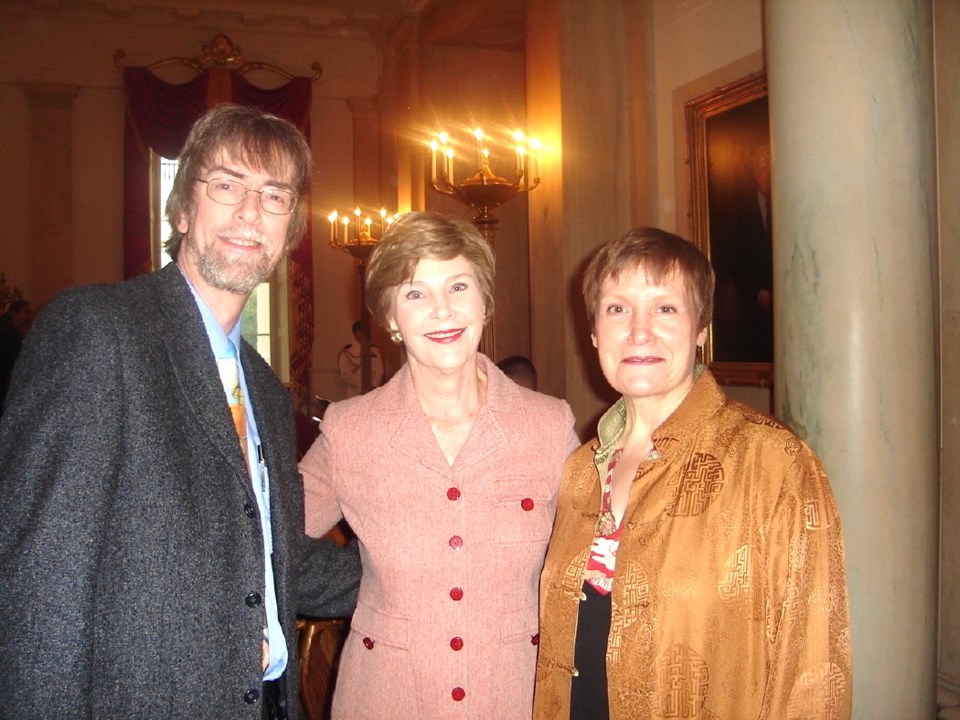 First Lady Laura Bush, centre, welcomed Spider and Jeanne Robinson to the East Wing as part of her 2006 National Book Festival. The photo was taken by their daughter, Terri Luanna da Silva.

In the waning charge cycles of a 12-year-old MacBook Pro, Spider Robinson is typing out his autobiography.

“I’m writing the serious, logical case that I’m the luckiest [person] who’s ever lived,” he said.

“My luck ran out, but all luck does.”

It’s extraordinary that a man who lost both his wife and daughter prematurely can still count himself as lucky.

But Robinson concentrates on the joy that his family and career brought to his life.

The well-known science fiction writer, winner of three Hugo awards and a Nebula award, has lived on Bowen Island since 2001.

This week, Robinson is one of the guests of honour at Worldcon, the 76th World Science Fiction Convention, this year held in San Jose.

The premier event of the season in its field, Worldcon gathers science fiction and fantasy fans, writers, artists, musicians and the like from all over the globe in a different city every year. It’s a weekend of lectures, panels, fandom, networking, costumes, and of course, the presentation of the Oscars of the science fiction world – the Hugos.

Being a guest of honour at Worldcon is rather like a lifetime achievement award. It requires more than 20 years of contributions to the science fiction or fantasy genres. (Robinson’s fantasy author counterpart in this honour is Chelsea Quinn Yarbro.)

But it’s not an honour he accepts on his own. For much of his career, his success was based on the support and inspiration he received from his late wife Jeanne, a Boston-born dancer whose own fascination with space led to an invitation from NASA to dance in space — an invitation that had to be revoked as a result of the Challenger explosion.

“In 1977 they wrote the first book of what would became the Hugo- and Nebula-award winning Stardance Trilogy,” says her 2010 obituary in the Globe and Mail. “Spider later recalled that the saga began as a short story he cobbled together in a desperate bid for cash. (The two young artists were often broke.) To save time, he decided to write about a dancer in zero gravity assuming he could lean on his wife's expertise. But it wasn't long before she pointed out that the heroine wouldn't follow his plotline because ‘she wasn't that kind of a person.’ He realized her character judgments were as astute on the page as in person, and invited her to pull up a chair.”

Although Jeanne “contributed substantially” to his other books, Robinson said she agreed to take credit for only the three that involved dance.

And even though she never did fulfill her space dance dream, she was thrilled to choreograph a dance in zero gravity for a film project called Stardance.

“For 25 to 30 years this was the work of Jeanne,” Robinson said of attending conferences and conventions. “Her job was getting us there and back.

“She made it fun. The fun of it was having someone put you up in a hotel room with your wife.”

But ever since his wife’s death from cancer at the age of 62, Robinson’s had some serious writer’s block.

“I just stopped getting science fiction ideas,” he said.

He would put in the hours in front of the computer; after all he’d been contracted to write three sequels to his famous Variable Star, based on extensive book notes left behind by "the dean of science fiction" Robert Heinlein, his childhood hero.

“The first 10 books I ever read were Heinlein’s,” he said.

The two became friends after Robinson defended the controversial author in a famous (and lengthy) 1980 essay titled Rah, Rah, R.A.H!. Point by point, Robinson takes on all the accusations ever hurled at Heinlein from “Heinlein’s male characters are all like him” to “Heinlein is a fascist.”

But when it came to Variable Star's sequel, despite the hours sitting before the computer, nothing came.

“Then I realized I have a book in me and I don’t know how to market it,” he said. That book is his autobiography.

Central to Spider’s case that he is indeed the luckiest man to ever live, and for that he gives the credit to Jeanne and their daughter, Terri Luanna da Silva.When Jeanne was dying — although that is not how she would have described the process — da Silver came to Bowen to help nurse her mother in her last year. After Jeanne died, when life was just getting back to normal, da Silva was diagnosed with stage 5 breast cancer.

"Jeanne never drank or did drugs; I never gave a thought that she would be the first to die," he told the Bowen Island Undercurrent in 2012. Then she got biliary cancer and I'm still reeling from the surprise. I want to tell death, 'You got it wrong; you came for the wrong person.' And now my daughter, who is 37, is trying to staying alive long enough to see her daughter grow up."

Despite missing his wife and daughter, Spider is not downtrodden.

“No one gets out of this alive.” he said, “I’m enjoying life a [lot] more than I expected. It’s been an interesting time to live. There’s no era I would have rather have seen.”

The music aficionado notes that he saw both Duke Ellington and the Beatles, and became friends with David Crosby, with whom he wrote a song.

Though originally from New York City, Robinsin is now through and through a West Coast islander.

“There’s no place in the universe that can touch Bowen Island. Bowen used to be where I hung my hat and plugged in my word processor. Now I’m really starting to love the place. It’s almost embarrassing to say.