Property was transferred to new investors in 2015 for a premium price, but just four years later they still realized a significant profit
Nov 7, 2019 5:12 PM By: Graeme Wood 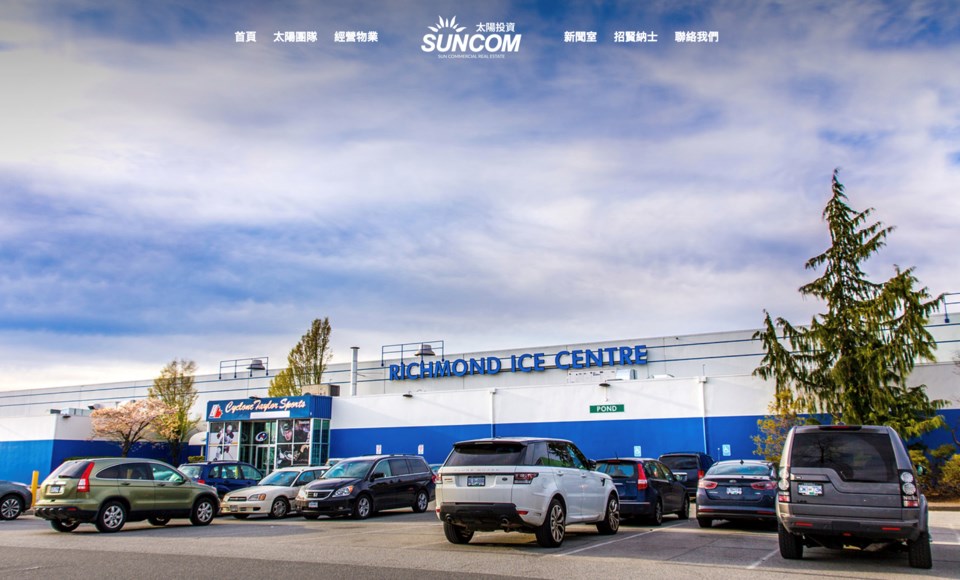 Richmond Ice Centre was sold by a trust corporation managed by Sun Commercial Real Estate to the City of RichmondSunCom.ca screenshot

The City of Richmond paid $32 million, plus taxes, to buy the Richmond Ice Centre (RIC) from a prominent group of real estate speculators that has sparked controversy in the past. The sale, shown in land title documents, cost the city $14.4 million more than the land’s assessed value in 2015 but $23.4 million less than this year’s assessment. The deal represents an estimated $11.4 million gross profit for the seller(s).

City spokesperson Clay Adams touted the cash deal as a “net financial gain” for the city, based on the augmented 2019 assessed value of $55.4 million. He noted the city is now relieved of its lease, which expired this year.

Adams said the city aligned the purchase with the lease expiration. Had the city sought a deal in 2018, it would have been negotiating for a property valued at only $38.5 million. BC Assessment stated the marked jump was a result of a re-assessment of “improvements,” although it did not specify what those improvements are and none are apparent.

The six rinks at RIC opened in 1994 as four rinks with two designed as practice facilities. About five years later, two more rinks were added. Now 25 years old, there are numerous maintenance issues with the building, including mould in dressing rooms.

“The priority is an evaluation of the centre to determine what needs to be done and when,” said Adams. “The city wants to ensure the operating infrastructure is in place to keep the Richmond Ice Centre safe and functional for decades to come.”

RIC was sold by 14140 Triangle Road Investments Ltd., which is part of a real estate investment trust (REIT) that sold the four properties of Riverport Sports and Entertainment Complex in 2015 for $103 million, as reported by commercial real estate analyst firm Avison Young. Each Riverport property is owned by a separate corporation; they are managed by Sun Commercial Real Estate Group Ltd., a relatively new player in Metro Vancouver’s commercial real estate landscape, having been incorporated in 2013 by Kevin Sun.

Last May, SunCom added City Square Mall to its portfolio for $225 million, more than double the property’s assessed value of $102 million. SunCom’s holdings also include the Sands Hotel in Vancouver, Westwood Plateau Golf and Country Club in Coquitlam and Mylora Sidaway Golf Club in Richmond.

In 2016, SunCom attracted the attention of the B.C. Securities Commission following a number of highly publicized investment offers that largely targeted Chinese-speaking local and offshore investors.

The commission then announced it was investigating whether securities laws had been violated for apparent crowdfunding. In 2018, SunCom announced the investigation was closed with no wrongdoing found.

Neither SunCom nor 14140 Triangle Road Investments Ltd. has filings with BCSC. Rules dictate, according to BCSC, that REITs do not have to file a prospectus or even an exempt distribution report if they offer securities to 50 or fewer shareholders.

SunCom advertised the site as “River White Homes,” despite the fact the properties are zoned as commercial and there is no area plan from the city.

Financial statements show the city paid River White Homes Ltd. $4.38 million for the lease of RIC and Watermania pool, which is owned by 14300 Entertainment Blvd. Investments Ltd. The city would not break down the costs of the lease payment. Watermania sits on a lot similar in size to that of RIC and is assessed at $46.2 million. Notably, the city purchased a five-acre lot in June 2015 directly behind Watermania and RIC for “strategic purposes.” Further down the road is an under-construction jet fuel storage facility.

Riverport was built in the late-1990s by developer Brent Kerr. It was sold for $85 million cash in August 2005 to Ontario-based TransGlobe Property Management Services, which set up the trust companies to hold the property assets. Title transfer documents for the 2015 transaction show a “non-sale” occurred, meaning shares were transferred to investors, who are not disclosed. As such, it’s understood that property transfer taxes were not paid, as is the case when property assets in trusts change hands in B.C. It’s not clear who actually owns the remaining Riverport properties. Calls and messages to SunCom went unanswered.

Such transactions garnered significant public policy discourse ahead of the 2017 provincial election, when property prices were surging in the Lower Mainland.

But while the provincial NDP government is planning to create a public registry of beneficial ownership of property in B.C. by next year, there have been no announcements to close property tax loopholes created by trust arrangements.

- With files from Richmond News