The Well closes its studio space for good

The pandemic has claimed another Bowen Island business. After six years, Bowen’s Artisan Square yoga studio is closing for good.

Chantal Russell, owner of the Well, in the midst of another mandatory shutdown, announced the studio space’s closure on Facebook last month. However, the Well’s online and outdoor (when possible) classes will continue.

Due to the COVID-19 pandemic, B.C. health authorities have imposed two mandatory studio closures over the past 10 months. When it was allowed to be open, the Well saw severely limited class sizes due to social distancing measures – six students where once there could’ve been 20.

“It just made it no longer viable,” said Russell, “and there was no end in sight for the next few months.”

As her teachers are contractors, Russell wasn’t eligible for the federal wage subsidies of 2020 and other government relief programs. “Even though I’m a small business, I was too small for the support that was being offered,” she said. 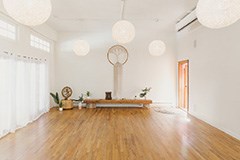 Though, under B.C. health guidelines, the studio could have reopened soon, the financial viability of the studio wasn’t there. “It was a hustle to do it before COVID,” said Russell.

The studio space’s rent was to return to the pre-pandemic rate as of January and Russell had to make the tough call.

“I wanted to continue teaching,” said Russell, “but I didn’t want to commute to the city to teach.”

So Russell and Saskia Tait started the Bowen Island Yoga Studio in 2014 and in 2017 rebranded it as the Well. Since 2017, the Well has shared a space with Wren (which is still open) between Montessori and the Wellness Centre.

At its peak, the Well had 12 teachers, give or take a couple and ran 20 classes a week.

“It became a destination for people on Bowen,” said Russell. “We attracted master teachers from all over the world who came and taught workshops here.”

“It became a hive of activity for different modalities, not only Yoga, but we had Kirtan…we had meditation groups, we had all kinds of different people come in to use the space.”

Bowen has several yoga businesses but it was diversity the Well offered. “I think we were the most central, with the most teachers, where people could buy a pass and go to multiple classes,” said Russell. “Most other places have one teacher.”

“I feel I feel a sense of sadness,” said Russell. “But I feel at peace with it because it was beyond my control.”

“I did what I could, the best I could for the time that I could and then I was at an impasse.”

“I also feel optimistic that we’re a creative island, and I’m sure we’ll find ways to practise together.”

The Well Way online (www.thewellbychantalrussell.com/membership) will continue. The online membership includes a library of pre-recorded classes, meditations, seasonal wellness rituals. Live online classes will likely return once Russell’s had the chance to recalibrate to the new reality.

Russell also penned a letter to the community (see link).

Has your business closed because of COVID-19? We’d like to know – editor@bowenislandundercurrent.com

Correction: a previous version of this article stated that there was no yoga studio on Bowen when Russell came in 2012, there were at least two at the time on-island at the time including Seven Hills Yoga and Yoga Loft. We are sorry for the error.

Here's how much it costs to rent a one-bedroom apartment in Metro Vancouver this February
Feb 3, 2023 2:15 PM