West Vancouver police say one suspect is in custody, two more are on the loose
Apr 5, 2021 11:35 AM By: Brent Richter 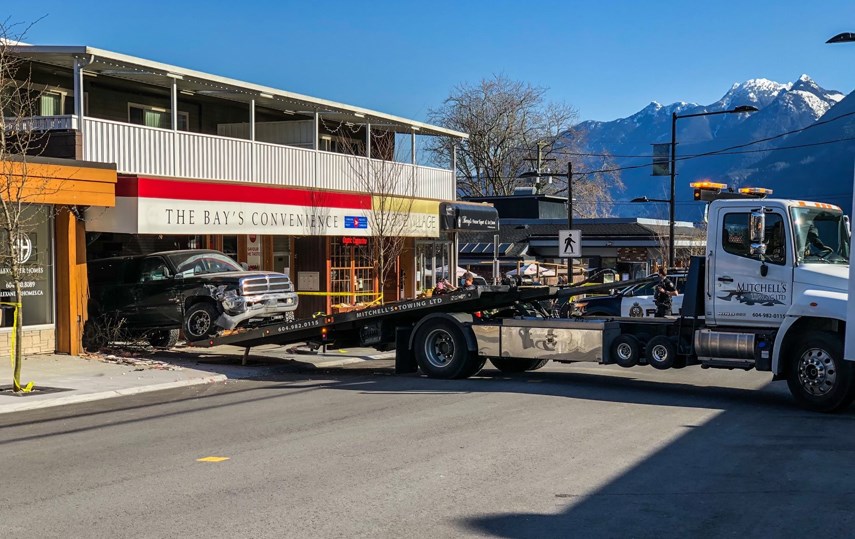 West Vancouver crews remove a pickup truck from the scene of a suspected smash and grab in Horseshoe Bay early on Monday, April 5, 2021.photo supplied

Multiple people called 911 around 2 a.m. on April 5 when they heard the driver of a black Dodge Ram barrel through the front wall of The Bay’s Convenience.

“Suspects were seen fleeing the area on foot after they failed to drive the vehicle out of the building,” said Const. Nicole Braithwaite, West Vancouver police spokeswoman. “They just couldn’t get it out.”

Officers set up a containment area around Horseshoe Bay. One suspect was arrested by the K9 unit but two remain on the loose, Braithwaite said.

Police later confirmed the truck was reported stolen out of Vancouver.

Now investigators are hoping any witnesses or members of the public can help locate the remaining suspects.

“The individuals involved caused extensive damage to both public and private property. They took out a tree in the process of getting into the building,” Braithwaite said. “We're just really lucky that nobody was injured.”

The investigation is still in its early stages, Braithwaite said, but police believe the thieves may have been targeting packages awaiting delivery in the Canada Post outlet inside the store.

As of Tuesday, police had recommended the Crown lay charges against one suspect in custody.