This is how close you can get to whales in B.C.

Boaters who don't follow mandatory sanctuary and approach distances could face up to a $1-million fine and up to 18 months in jail.

With only 75 animals left off B.C.’s coast, a spokesperson for Fisheries and Oceans Canada (DFO) says “even small changes to a few individuals can have big impacts.”

In addition to dwindling chinook salmon stocks — the whales’ primary source of food — vessel strikes, entanglements as well as physical and acoustic disturbances, all can have a negative impact on the animals.

“It is everyone’s responsibility to know the rules around marine mammal interactions and illegal activities may be subject to severe penalties,” writes DFO spokesperson Leri Davies in an email to Glacier Media.

HOW CLOSE CAN I GET?

Outside of the 400-metre approach zone above, all vessels must keep at least 200 metres between them and killer whales.

The 200-metre rule also applies to all other whale species, including dolphins and porpoises, when they are in a resting position or with a calf. Otherwise, boats and other watercraft must stay at least 100 metres away from any whale species that are not killer whales.

The Ministry of Transportation has given special permission to eco-tourism vessels flying a purple “AV” flag to get as close as 200 metres to whales, though they have agreed to avoid southern resident populations.

In all of B.C.’s coastal waters, DFO asks boaters and fishers to voluntarily stop fishing and slow speed to less than seven knots when spotting killer whales within a kilometre of their location.

If you find yourself too close to a killer whale, DFO recommends putting the boat’s engine in neutral and letting the animals pass.

Note: it is illegal to position a boat in a way that would corner an animal along a coastline or between other boats.

There are several seasonal bans on recreational and commercial fishing in key killer whale transit areas (see the map below). 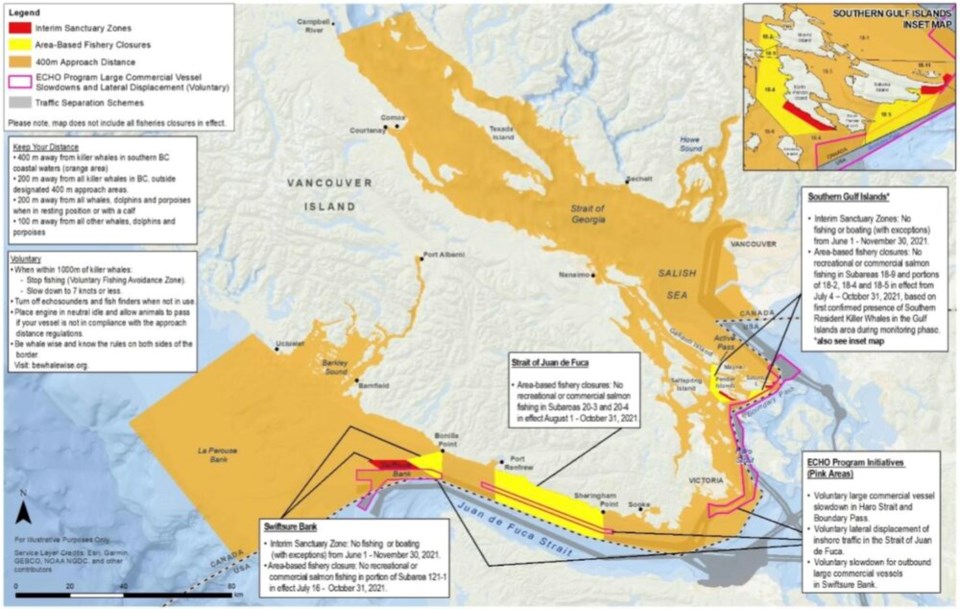 CAN I FILM A KILLER WHALE WITH A DRONE?

Yes, but under strict requirements.

Drones are required to maintain an elevation of no less than 1,000 feet when within a half nautical-mile radius (about 3,038 feet or 925 metres) of any marine mammal, including whales.

Even at that distance, drone pilots should avoid flight manoeuvres around marine mammals so they don’t stress or alter their behaviour, says DFO.

The DFO’s Pacific whale protection unit runs two high-speed patrol vessels out of Annacis Island in Delta and in Victoria.

Boaters who don’t follow mandatory sanctuary and approach distances could face up to a $1-million fine and up to 18 months in jail.

In the summer of 2019, a Prince Rupert judge ordered a whale guide to pay a $2,000 fine for getting within less than 100 metres from a humpback whale. The fine represented the first conviction under new Marine Mammal Regulations.

Across Canada, it is illegal to feed, touch, swim or in any way interact with a marine mammal. Tagging or marking an animal, moving it or enticing it to move is also illegal.

Anyone who witnesses such infractions or finds a marine mammal in distress or dead, is encouraged to report it to DFO’s Observe, Record and Report (ORR) line at 1-800-465-4336 or by email at DFO.ORR-ONS.MPO@dfo-mpo.gc.ca.

Stefan Labbé is a solutions journalist. That means he covers how people are responding to problems linked to climate change — from housing to energy and everything in between. Have a story idea? Get in touch. Email slabbe@glaciermedia.ca.