This is the end for four Davies Orchard cottages 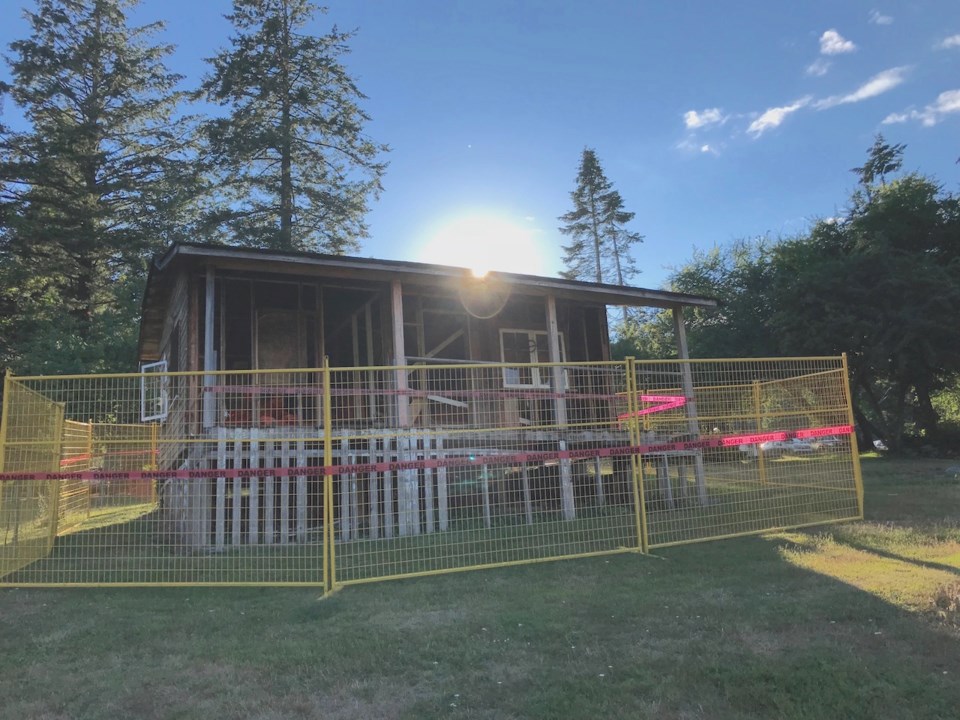 Cottage #9 of Davies Orchard was partially deconstructed by the evening of July 10. Heritage Bowen had partially restored the building, spending significant resources stabilizing the foundation. Now, only the foundation and a pile of rubble remainsBronwyn Beairsto

The sun is setting for four of the 10 remaining Davies Orchard cot­tages.

Due to some hazardous building materials in the former dwellings, hazmat teams are stripping the cottages for the next three weeks and then the landowner Metro Vancouver, says it expects the deconstruction to take an additional three weeks to complete. One of the cottages is already a pile of rubble, with just the foundation remaining. Other cottages have missing walls and boards as they’re gradually erased from the skyline.

This deconstruction marks the end of Heritage Bowen’s long fight to save the cottages.

The United Steamship Company built the holiday cottages in the 1920s as part of what would grow to be the largest pleasure resort on the West Coast.

The USSC’s expansive opera­tion dominated Snug Cove and Deep Bay with nearly 200 cottages throughout the area, including 20 in Davies Orchard.

“It was considered one of the most romantic destinations,” said Bowen Heritage board member Judi Gedye. “Many people in their 70s believe they were conceived in one of these cottages.”

The one-storey two-bedroom buildings, complete with wash­rooms and fir flooring, were initially summer rentals but by the time the USSC was sold in 1956, some had year-round tenants.

Over the decades the cottag­es were home to many islanders, including Gedye herself.

The beginning of the end

Metro Vancouver bought the orchard in 1983 and it was added to Crippen Regional Park. At that time, says Gedye, there were several USSC cottages on the opposite side of Trunk Road. In the 1990s the cottages were torn down, but Gedye said that in exchange, it was agreed that the orchard cottages above the marina were safe.

Out of the 10 remaining USSC cottages, two are managed by the current United Steamship Company Marina as guest housing. One is a museum run by Bowen Heritage,

One is the Bowen Heritage office, another has been partially restored by the society, though it’s currently being demolished. The rest of the buildings stand in various states of disrepair.

Bowen Heritage has spent much of its existence fighting for the pres­ervation of all the Davies Orchard cottages.

The same study notes that the value of the cottages is not in their design or individual attributes, but in their clustering. Walking through the orchard today, one can imag­ine children running through the apple trees, stomping up verandah steps out of breath, banging on the cottage door of the friend they just met. Gedye notes that it’s the orchard atmosphere and building proximity that preserves the ghosts of the original USSC.

A new look for Davies Orchard

After consultations, reports and meetings, the Metro Parks Board voted unanimously last November to proceed with the Davies Orchard Revitalization.

Under this plan, six cottages would be preserved and four would be demolished.

The revitalization is slated to include orchard expansion, inter­pretive displays, a cottage-themed picnic shelter, a nature experience program area, a nature trail, open space with views of both the marina and coast mountains and improve­ments to the six remaining cottages.

“It’s really important to look at this with the perspective not of what’s lost, but what’s gained,” said Bowen’s representative on the Metro Vancouver board, municipal coun­cillor Maureen Nicholson.

“The local community will have the benefit of six cottages restored and maintained without the tax bill.”

Nicholson notes that even sav­ing six cottages wasn’t an easy task. “There were some in the region who would rather there be no cottages because they’re difficult to main­tain,” she said.

Nicholson says that after this demolition, there’ll be a design process for the orchard area which will detail landscaping, parking and walking space.