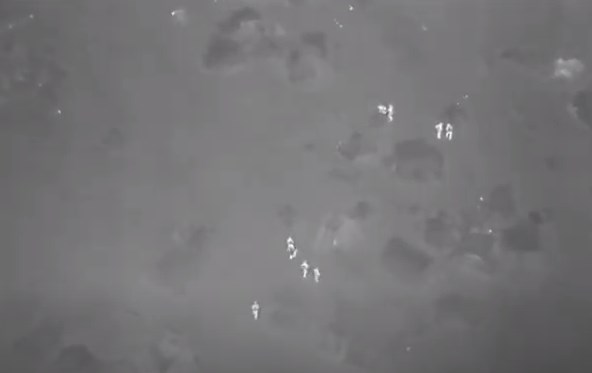 The Vancouver Police Department has released drone footage of officers descending on the Oppenheimer Park tent city last winter after receiving a report of a man being shot in the now-dismantled encampment.

An 18-minute video recorded by the department’s “Skyranger” drone flying at 150 feet above the park on Dec. 12, 2019 captures patrol officers and members of the emergency response team going tent to tent as rats scurry across the park.

The footage was captured at night but the drone’s infrared technology lights up the officers, including one with a dog, as they move throughout the park. At the time, police said a man was shot in the knee and taken to hospital.

No arrests are noticeable in the footage, which was first released Oct. 20 to CBC under a Freedom of Information and Privacy Act request for any thermal imaging material captured by a drone or other means at Oppenheimer between January 2018 and June 2020.

The footage from Dec. 12, 2019 is now posted on the VPD’s website, as are emails between officers that shed more light on the drone’s use that night, including a comment from the drone’s operator, Const. Thomas Callaghan, about “hundreds of rats moving around.”

Supt. Steve Eely responded in a briefing note on the incident, saying: “Nice job all around: dealing with an active shooting, locating a suspect, clearing for additional victims, addressing advocate concerns; and using the drone to maintain officer safety. Not sure if the clearing had already occurred when the [forward-looking infrared camera] was taken, but…interesting how many tents appear unoccupied…and then there’s the rodents…lots of heat signatures. Well done!”

The drone was deployed four months after the Vancouver Police Board approved the use of the camera-carrying flying machines in September 2019. The department said it purchased three drones to be used for a number of scenarios including searching for missing persons, mapping crime scenes and responding to disasters.

The board’s approval of the drones included a policy that governs officers’ use of the machines: they are not to be used for random surveillance, and footage that has no “evidentiary value” is to be destroyed after 30 days, whereas footage with “evidentiary value” will be retained for at least one year.

“What I can tell you, generally speaking, is that when exigent circumstances exist that present a threat to human life, police are able to search property to deal with that threat,” Visintin said. “This applies to actual buildings [condos, houses, etc.], as well. A critical incident like an active shooting event in a public place, with one confirmed victim, an unknown suspect, and unknown number of victims, presents exigent circumstances that would allow police to act to prevent further harm.”

A VPD report that went before the board said the department consulted with the B.C. Civil Liberties Association in developing its drone policy, and that “where possible, the [association’s] recommendations have been incorporated in the development of [the drone] policy.”

Meghan McDermott, a staff lawyer and acting policy director for the association, said the measure police took to use the drone in response to the shooting appears intrusive on people living in the tents.

But McDermott said she wants more details about the shooting and whether it happened in a tent, or somewhere else in the park to better understand the rationale police provided for the drone’s deployment.

“They could have maybe met their objective without the use of that drone,” she said Thursday. “The disconcerting thing for us is the privacy violations of the people living at that park. The gross thing on that video is how they’re going into everybody’s tents.”

McDermott recommended the department create a section on its website that is regularly updated each time a drone is deployed — and for what purpose — as is already done for the use of Tasers. (The video of Oppenheimer Park is posted in the FOI section of the VPD’s website, and was only released because of the CBC’s request).

“There is no legal requirement for them to do that, but just for public trust I think it’s a wonderful idea for transparency,” she said. “It would be a minimal effort for the police and it would have a big pay-off in terms of public trust.”

When the board approved the use of the cameras last year, a report said the total budget for the drone program, which includes purchase of six drones, training, Transport Canada certification and fleet insurance totalled $141,000.

The report said $100,000 of that cost was covered by a grant from the Vancouver Police Foundation.

The Oppenheimer Park encampment was cleared in April and May after the B.C. government issued a public safety order out of concerns over COVID-19 transmission to clear the camp and move people into housing, including downtown hotels.

A second large homeless encampment has since been set up in Strathcona Park.