In 2015, the Department of Fisheries and Oceans put fisheries closures in place to protect nine glass sponge reefs in Howe Sound and the Georgia Strait.
Sep 27, 2017 4:24 PM By: Meribeth Deen 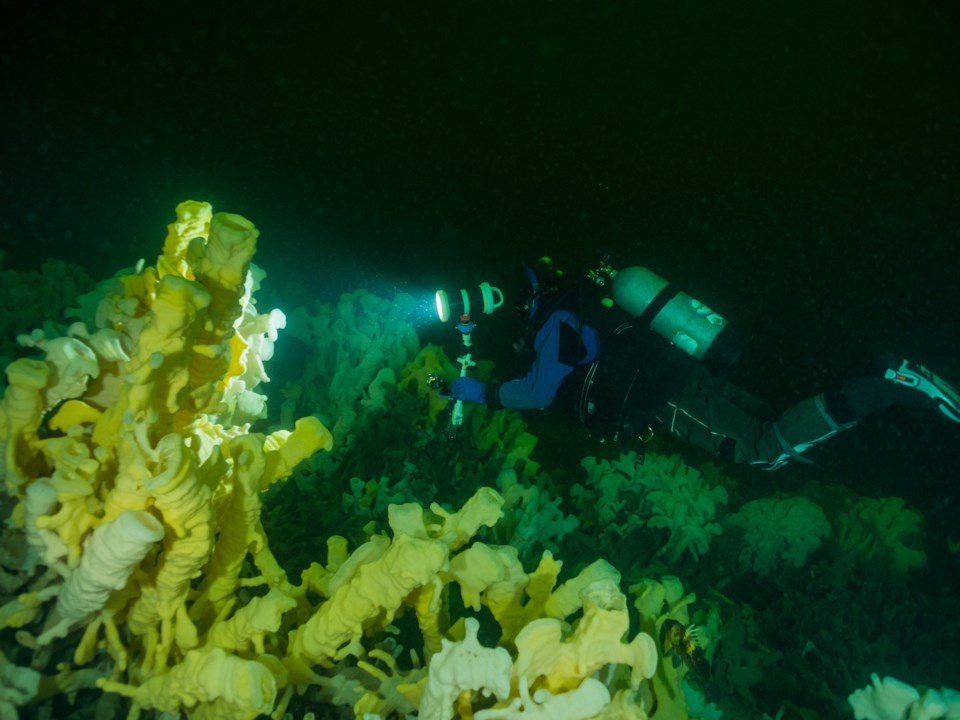 Diver Glen Dennison exploring a glass sponge reef off Halkett Point, Gambier Island. Last May, BC’s Minister of Environment announced a 136 Hectare park expansion into the surrounding marine areas based on recommendations from Underwater Council of BC, Marine Life Sanctuary Society of BC and Vancouver Aquarium.ADAM TAYLOR

In 2015, the Department of Fisheries and Oceans put fisheries closures in place to protect nine glass sponge reefs in Howe Sound and the Georgia Strait. Last week, the DFO issued a notice that thirteen more reefs are now under consideration for similar closures, and they are asking the public to avoid fishing in areas surrounding those reefs.

Glass Sponge Reefs are unique ecosystems that provide important habitat for marine animals including rockfish, herring and sharks. They’ve been in the ocean since dinosaurs walked the earth, although scientists thought they were extinct until they were re-discovered in the Hecate Strait in the late 1980s.

The group of thirteen sponges currently under consideration were brought to DFO’s attention by members of the Marine Life Sanctuaries Society (MLSS).

“If these are closed, it will be the first time that I am aware of that citizen-based research is being used to make a policy decision,” says Bowen Islander Adam Taylor. “The DFO didn’t just take our word for it on the presence of these reefs, they commissioned a detailed report, and then ground-truthed the data with their own scientists.”

Taylor is a diver, the president of the BC Underwater Council, and has participated in the research under consideration. He says the first time he saw a glass sponge was off the shore of his family’s property on Dorman Point.

“My dad used to tell stories of sitting on shore in the 1940’s and watching fishermen pull up large, mature yelloweye rockfish,” says Taylor. “These fish live over 100 years and even when I was a child they were becoming rare. It was still easy to catch other species of rockfish, but they were soon fished out... Based on these stories I asked Glen Dennison to map Dorman Bay as part of the 2011 National Park proposal. Little did we know he would discover a sponge reef off Dorman Point, and sponge reefs are great rockfish habitat. In my first 20 years of diving, I had seen a total of five adult Yelloweye in Howe Sound. On that one dive, I saw four, and one of them was pregnant.”

Taylor described the sponge reef discovered off Dorman Point as being about the size of the General Store and a nursery area for smaller sub-adult fish. The divers also found a hole surrounded by dead sponge, probably caused by the impact of a prawn or crab trap.

Glenn Dennison says this instance of damage was some of the worst he’s seen, and that it was totally heartbreaking.

“At first it was like a cookie cutter made the hole, about a meter deep. You could see the crushed sponge and very sharp edges that were caused by the damage,” he says. “A year later, that hole had turned into a crater. The sponge just couldn’t recover.”

Dennison has been instrumental in the discovery of Howe Sound’s glass sponge reefs, and attracting an ever expanding team to collect data.

He mapped the thirteen sponge reefs under consideration for closure, and also took video with a specially made drop-camera. All of this work was done as a volunteer, Dennison used his own boat and equipment he developed and funded himself.

“With regular diving equipment, you can only go down about 150ft for about 5 minutes. If you go down deeper, or stay down longer, regular air essentially becomes poisonous,” says Dennison. “Four of the thirteen reefs up for closure are dive-able with regular air. Other reefs are closer to 250 feet, which is a sweet spot for glass sponge but are challenging to study. Using my drop-camera was essential for getting good data on these sponges - I figure, if you want to get something closed for protection, you’d better have good data.”

Dennison says that protecting Howe Sound’s glass sponge reefs is critical if we care about saving rockfish, but the reasons are also bigger than that.

“After bacteria and viruses, these might have been the next complex life form on the planet,” says Dennison. “A giant multi-nucleated cell that has sensory signals that corss an animal that is several meters wide? That has to be a curiosity to an evolutionary biologist. Howe Sound makes a perfect natural laboratory.”

1
Muni Morsels: Boon for Davies Orchard and a cidery is in the works
2
How this young Squamish Nation woman is making a big difference in her community
3
It was an all around record-breaking year for the Hearth's Mini Art Works exhibit
4
Cameras in Snug Cove are for Netflix TV series
5
Meet your Bowen Island neighbours: Moira Greavan