For the first time in almost 100 years, new generations of wild salmon are spawning in the upper reaches of North Vancouver's Seymour River.
Dec 14, 2020 4:57 PM By: Brent Richter 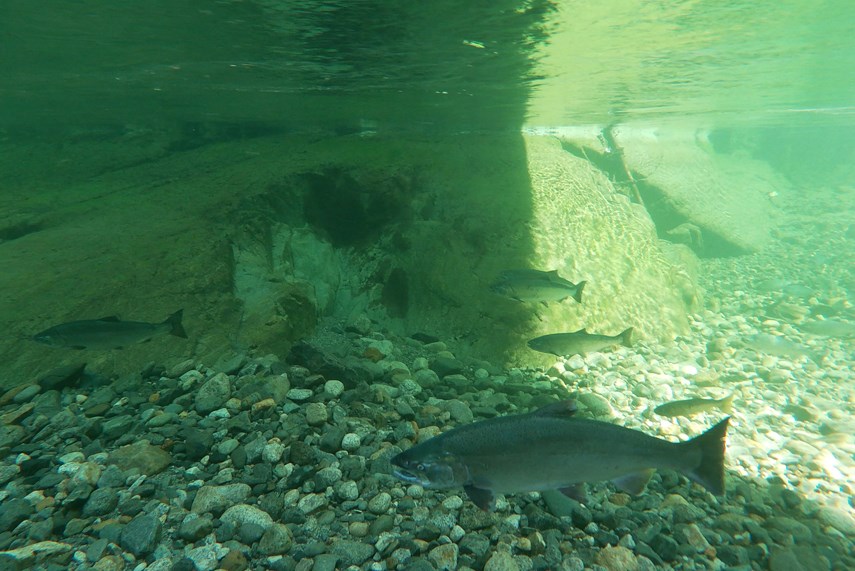 For the first time in almost 100 years, new generations of wild salmon are spawning in the upper reaches of the Seymour River.

The Seymour Salmonid Society and Metro Vancouver are now in their second year of stocking Seymour Lake with mature coho in hopes it will kick-start a healthy run.

“Any time that you can strengthen a wild fish stock, it bodes very well for their survival,” said Shaun Hollingsworth, president of the Salmonid Society. “As fish habitat is concerned, it's beautiful.”

There has always been a set of natural waterfalls on the Seymour about 16 kilometres north of the river’s mouth, which athletic salmonids could climb. But when the first Seymour dam was built for drinking water supply in 1927, it made the river impassible, cutting spawning fish off from a river network that reaches almost to Squamish.

Since then, the runs of coho and steelhead trout have been bolstered by the Seymour River Hatchery, but mature fish were never allowed back into their homewaters until 2019 when, after years of lobbying, the Salmonid Society got approval to reintroduce them.

Jesse Montgomery, Metro’s division manager in the watershed, said wild fish tend to be more resilient to environmental disturbances than their hatchery-bred cousins.

More than giving the species a fighting chance at spawning naturally, it also reintroduces them to their natural predators and scavengers that live in the watershed where humans are not allowed to tread.

“It’s a really natural and relatively pristine river ecosystem that is effectively not commonplace in coastal North America. It's really one-of-a kind in having these large tracts of old growth forest and relatively undisturbed river,” he said.

The mature coho placed in the water supply this year will spawn over the month of December. Their fry will stay in the lake for a year and a half before making their way to the ocean. Those that survive two years on their own will return to the Seymour where volunteers can trap them and give them an express trip past the dam, allowing them to spawn in the very creeks and tributaries they hatched from.

Already, the program is showing signs of working. When volunteers introduced mature coho this year, they spotted wild salmon in the creek – the first generation of fish ever born above the dam.

Adult Coho Salmon Return to the Seymour Watershed from Metro Vancouver on Vimeo.

The dam is not the only impediment to fish passage on the Seymour though. In 2014, a massive rock slide nearly ended the river’s viability as fish habitat. Since then, the Salmonid Society has led a project to slowly break apart the rocks and open new channels for returning salmon

In 2019, after years of work, the Salmonid Society announced the first confirmed sightings of fish clearing the slide site on their own.

Since then, contractors have been back to the slide site continuing to break apart the largest single boulder the slide produced, known by volunteers as the “house rock.”

During a winter storm at the end of January 2020, when the river was flowing at more than 400 cubic metre per second, the house rock moved slightly downstream, threatening the river once more.

“We know our responsibility. If that thing fell over and plugged the river, we were going to be in a bad situation,” Hollingsworth said.

Once the boulder is broken apart and its pieces have settled on the river floor, engineers on the years-long project believe it will be finally complete, Hollingsworth added.

“They suspect that we're down to the short strokes now - the final the nitty-gritty,” he said

EDITORIAL: Seymour Salmonid Society moved mountains to save a river
Dec 6, 2019 6:59 AM
Comments