By age five, Jay Graham had already spent lots of time observing his brothers Brett and Chai learning Taekwondo and his mother Rebecca Salmon says, it was clear he already loved it.
Dec 24, 2017 11:25 AM By: Meribeth Deen 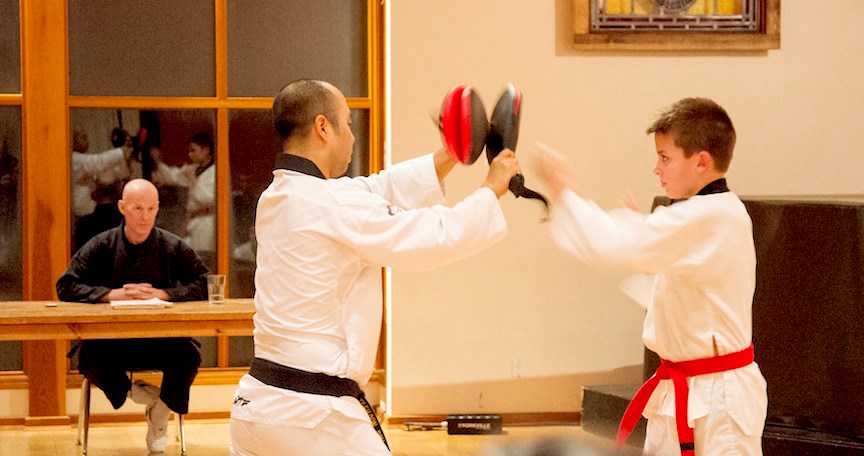 By age five, Jay Graham had already spent lots of time observing his brothers Brett and Chai learning Taekwondo and his mother Rebecca Salmon says, it was clear he already loved it. Still, he was an anxious little boy, and to help calm his nerves his mom took up the martial art with him. This month, seven years later, Bowen Island Taekwondo awarded Jay with his black belt.

“It’s a pretty big deal I guess,” says Jay, modestly. “I’m working now towards my first dan and hopefully eventually will get my eighth, I don’t know why I would stop.”

Jay’s brother Bret gave up taekwondo after getting his blue belt, and his brother Chai was awarded his black belt a few years ago. Chai now has his first dan, but has moved on to study Thai kick-boxing.

Rebecca Salmon says that her youngest son has been helped along in achieving this milestone by a recent growth spurt that has helped his sense of balance, by a great social environment in the taekwondo program, and his brothers.

“There were a number of patterns that Jay was struggling with, that he wasn’t 100% on,” says Salmon. “He was quite nervous about those. His brother Chai was really able to help him, not just because he has his first dan, but also because he was a junior instructor. So in the lead-up to Jay’s belt test, they worked a lot together. Those patterns really seemed to stick in nicely.”

She says there was also a surprise challenge during the belt test, and overcoming it required both perseverance courage.

“Normally in the test, the students are asked to do 50 kicks, and that is a hard thing,” says Salmon. “But before Jay’s test, one of his friends who was going for a lower-level belt was asked to do 75 kicks. That was intimidating, but when his turn came, they asked Jay to do 100. He was very sore the next day, but he succeeded.”

Master Michelle Park with Bowen Island Taekwondo says that perseverance is the key to Jay’s success.

“He started when he was five, so Jay has now stuck with Taekwondo for seven years,” says Park. “Out of 100 people who sign up for any form of martial art, less than five make it to black belt. Most people are just not that committed.”

Park adds that while perseverance can be a mark of character, parents also play a huge role in whether a kid sticks around through the ups and downs of their chosen sport or martial art.

“When a child is having a hard time it is up to the parent to step up and keep them going,” says Park. “Also, Scot (Master Scot Strachan) and I like to see martial arts training as building a reference point for the kids. When a kid wants to quit or when he’s bored, that’s a crucial time to encourage him or her. If a kid hears something all the time, it can sound like nagging and we try to avoid that. During the promotion test, we emphasize the tenants of taekwondo. Perseverance is one of them. A farmer who digs many holes will not find a well, is what we say.”

She adds that taekwondo is not about entertainment, but if a student does the exercises every day, he or she can become a black belt.

“We believe in positive affirmation,” says Park. “We end every class with the mantra, I’m happy to be me because I learned to be happy.”