On a soggy Saturday, in the middle of the rainiest spell since April, The Bowen Island Golf Club held its most important tournament of the year - the annual fundraiser, this year called “Stayin’ Alive.
Sep 28, 2018 12:19 PM By: Terence Mckeown 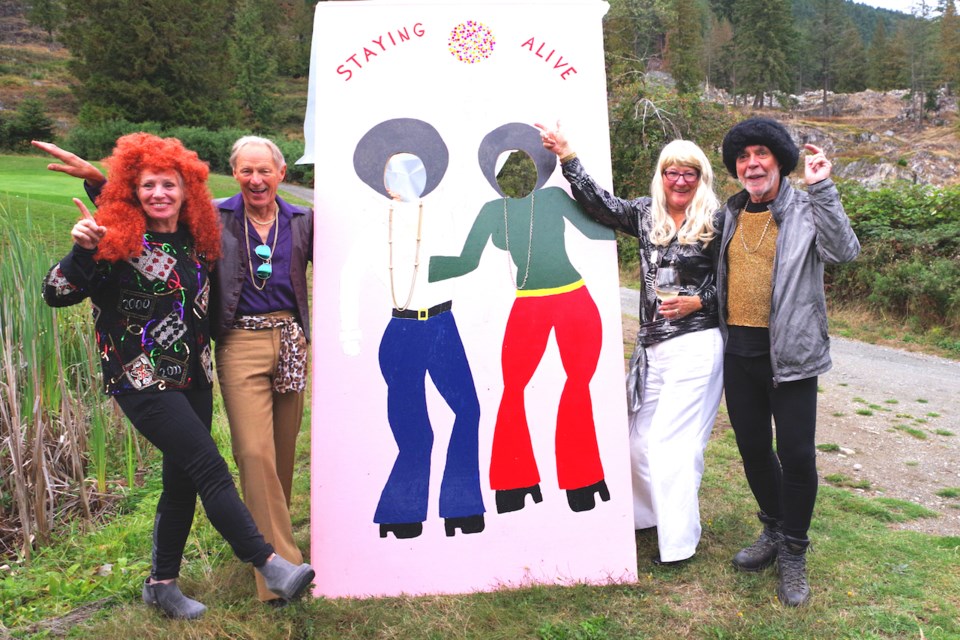 Andy Powell-Williams, Barry Adams, Heather Coulthart and Gary Walsh dressed up for a ‘70s night on the town (or a day on the golf course.)Jane Skipsey and Pat Adams

On a soggy Saturday, in the middle of the rainiest spell since April, The Bowen Island Golf Club held its most important tournament of the year - the annual fundraiser, this year called “Stayin’ Alive.”  And there were two little miracles: the rain stopped as the event started and started again as it ended; and the citizens and businesses of Bowen stepped up once again to keep our course alive for another year.

Our nationally-acclaimed golf course faces an existential crisis every year. It costs tens of thousands more to operate than we can earn from green fees and memberships. From the club’s inception, volunteers have stepped up to do much of the necessary work themselves. This has kept hard costs to a minimum, but a large deficit remains.

So once a year we hold a fundraising tournament. On September 15, our Stayin’ Alive tournament sold out, with 110 golfers and diners attending for a fun round of golf, special contests and a great dinner from The Snug’s catering. Our silent auction featured items and gift certificates donated by almost every business on Bowen and many individuals. Our live auction included fine art, vacations, golf adventures, and even a live band for a house concert – all thanks to Bowen citizens who want to see the golf course survive. (A full and long list of thanks will be published elsewhere in theUndercurrent. We’re very grateful!)

While not the focus of the day, there was a hard-fought golf competition and it produced some winners. Best team score: Dave Bellringer, Tom Roocroft, Shane Fitzpatrick, and Tim Kerr. Closest to the pin on #4 and #6: Lucas Puri and Kathy Thom. Shootout: first, Dave Bellringer and second Barb Rendell (not coincidentally our two 2018 club champions.) Putting contest: a tie, Les Meszaros and Rob Purdy, both sinking two of their three putts in the open competition, making a playoff unnecessary (and we ran out of time.)

In addition to the event on Saturday, there are ‘Patron’ and ‘Joint Hole Sponsorship’ donations. Bruce Russell, our Bowen “Citizen of the Year,” is the Citizen of every Year at the our club. Bruce uses his energy and powers of persuasion to raise the majority of what’s needed annually, with this tournament putting us over the top. The final numbers aren’t in yet, but Bruce reports he has 110 x $300 Joint Hole Sponsorships, up from 93 last year. Many of these were made in honour of Bud Moul, who died this year. Bud was a strong supporter of the course since its inception in 1988.

Many thanks to Ruth Openshaw, chair of this year’s event and members of the pro shop committee Heather Coulthart, Kathy Clarke, Peter Clarke, Bob Miller, Terry Boss, and Terry McKeown. And to our pro Cody White, who worked all day both on the course and off; and Dale Hewitt, auctioneer extraordinaire who was as entertaining as he was effective. Other indispensible volunteers were Bill Openshaw, Lisa Avery, Maurice McGregor, Jill Purdy, Susan Lucas, Tom Monaghan, Tom and Dale Edwards, Sue and Steve Hoffar, Karen and Bob  Moles, and Gary Walsh.

Little miracles happen every day on Bowen, many of them in the form of a supportive community’s generosity. We know how lucky we are.